On the Muppet Wiki, there is a "Random Muppet" button which sends you to the page of one of the thousands of Muppets in existence.   I will press the button and discuss the importance of the Muppet that comes up, no matter how obscure.  No skips.  No redos.  This is the Random Muppet Challenge. 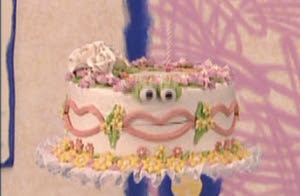 A sentient, sexually-ambiguous, floating cake with an unintentional death wish.

In the recurring "Elmo's World" segments that began taking up a third of each Sesame Street episode in recent years, Elmo would choose a topic and ask questions about it without relenting for about 20 minutes.  He would interview various authorities on the subject, or present little clips that related to the subject in some way.  It was the television equivalent of a toddler tugging at your pant leg and asking "Why?" after every single thing you said.

One day, Elmo became really excited about birthdays, so he set out to explain the concept to all the viewers at home.  And while everyone in the world has the experience of being born, Elmo managed to book some abstract guests for his show, namely a birthday cake.  The cake only appears for two lines and then Elmo's short attention span causes him to get distracted by something else.


If you managed to make it to the birthday cake's appearance, you'll notice that it only had one noteworthy piece of wisdom when Elmo asks what its life is like:


Birthday Cake: "It's a piece of cake"

And that's it. The birthday cake floats on to spread advice and icing throughout the land.

Why Is He/She the Best Muppet?

Imagine the life of a birthday cake. Prepared with tender care, the birthday cake is treated very delicately, dressed up and decorated, quite possibly the prettiest of all foods. You are assigned a dangerous but revered task of carrying one or more burning torches, like an Olympian. When you are brought out to meet the public for the first time, the crowd erupts in a song of delight. Everyone focuses on you as you are presented to the guest of honor. They blow out your torches, you grant them a wish, and the ceremony is complete.

All sentient food in the land of the Muppets is aware of their imminent demise. They choose to accept or ignore their short lifespan and instead sing and be merry. But this birthday cake is actually treated with class and respect. It doesn't sing because it genuinely believes it will have a long rich life. The way everybody treats it, how could it not think that it is the center of the universe?

As soon as the knife is injected to make the first slice, realization hits and death is mere seconds away. But the cake has no reason to expect any harm. All other food is eaten along with other food. On the dinner plate, food helplessly watches as their brethren are eaten. In the fridge, food trembles in fear, awaiting the day they are either selected for consumption or met with expiration. The birthday cake lives it's entire life in solitude. It doesn't interact with other food, as it is often hidden from the birthday guest. The cake, for all intents and purposes, is untouchable.

The birthday cake appears again in a segment explaining the word "scrumptious." This time, it has a manlier voice, so it is unclear whether or not this is the same cake from Elmo's World. Either way, the cake has the perspective that all cakes have, unaware of the truth. 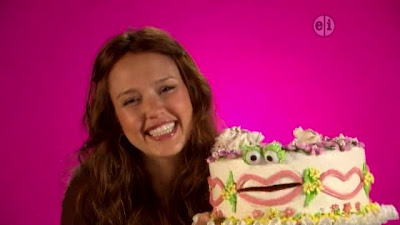 They are both scrumptious, in very different ways.

This birthday cake clearly doesn't realize that scrumptious has two meanings. He/she believes Alba is complimenting his/her good looks and attractiveness. Alba laughs and plays along, but she knows that cake is not meant for this world very much longer.

Is it better or worse to be ignorant of ones mortality? The birthday cake lives its entire life in bliss. Is that necessarily a bad thing? Is there even an answer?