Before we get started, would you please rise for the Grouch Anthem? 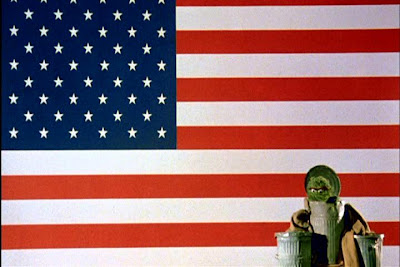 If you politely agreed to that request, then you missed the entire point of the Grouch Anthem.

The existence of a Sesame Street movie creates an odd sensation.  It is common for television shows to be adapted into films, but rarely do we see this with long-running daytime shows that produce over 100 episodes a year.  Just to give you an idea as to how rare this phenomenon is, let me remind you that 2012's Dark Shadows was the first movie ever based on a pre-existing soap opera.

The fact that it is a show for preschoolers makes the leap to screen even weirder.  Try to imagine a property like Mister Roger's Neighborhood getting a theatrical release.  It wouldn't happen because preschoolers are not the target audience for movie producers, but their parents are.  Why would a parent take a harrowing trip to the movie theater to see a show that their kids watch everyday anyway.  It's not like little kids are thinking, "Oh, a movie adaptation of Teletubbies will allow the writers to tackle deeper, harder-hitting issues that the television format doesn't enable them to cover."

So, who is a Sesame Street movie for?  Well, given that Follow That Bird premiered in 1985, 15 years worth of kids would make a nice large audience, and they probably wouldn't mind a trip back to Sesame Street.  But, the tone of the movie would be a little different.  Gone are the blatant educational sketches or whimsical animated inserts.  Instead, we are focusing only on Big Bird as a character who just happens to have been the star of the biggest children's show of all time.  And it was time to teach kids a different kind of lesson.  A lesson about life.

The movie starts with the assumption that you know all about Sesame Street and it's inhabitants, so instead of introducing the existing characters, we meet a group of avian social workers discussing their next case. 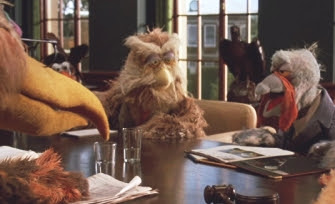 Because that's what kids love: meetings!

The head of the Featherd Friends adoption agency informs the board of a troubling situation in which a 6-year-old bird has been discovered living by himself in the middle of an urban city without any other birds to care for him.  It almost seems like a self-parody that the movie's premise is based on an issue that the show never bothers to address because...it's just a magical kids show. 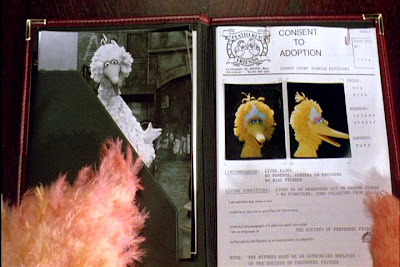 Nope, this movie is going to get heavy.

I've proposed my theory about the history of Big Bird's family and this movie jumps on that assumption and runs with it.  Despite Big Bird's evident contentment for where he is, the board believes birds must be surrounded by their own kind in order to thrive.  In order to save Big Bird from his life of abandonment, the case worker Miss Finch agrees to track him down and place him with a nice family of birds in Illinois so that he can live a better life. 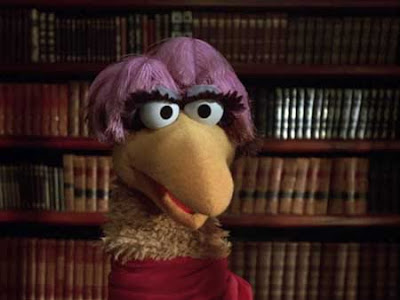 This brings us to the movie proper as we see Sesame Street, remade for the big screen! 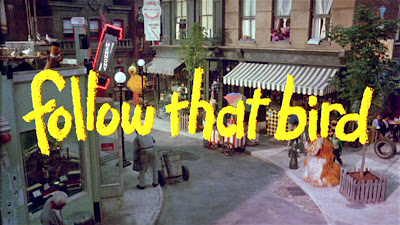 There are actually buildings across the street now?!

Sesame Street has never looked busier or more realistic as all your favorite Muppet and non-Muppet characters walk around and going about their daily business.  Big Bird enters on roller skates and interacts with a chirping bird, showing that he is just fine exactly where he is.  But shortly after he takes a tumble into Oscar's garbage pile, Miss Finch discovers him, and finds that her assumptions are true: Big Bird is living in filth and needs someone to take care of him. 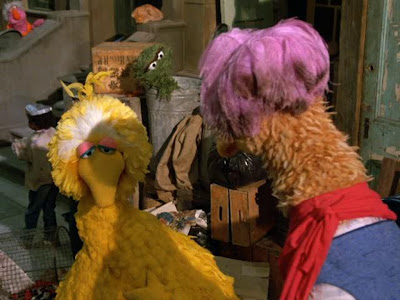 She discusses with him the opportunity to live a life with birds, far from Sesame Street, where he can finally have a real family.  Big Bird is unsure at first, but he starts to imagine the perks of having his own mother and father taking care of him.  His fantasy shows that his lack of parents and siblings has bothered him for quite sometime, and finally, his dreams are about to come true! 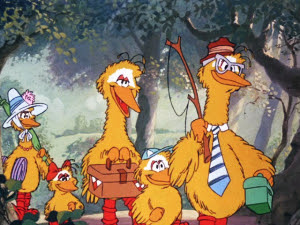 Big Bird agrees to leave, much to the dismay of all his friends and neighbors.  Despite their suggestion that they are his family already, Miss Finch reminds them that they are not birds and are, therefore, unfit to raise Big Bird.  Big Bird makes his rounds, saying goodbye to all.  He leaves Snuffy in charge of his nest, and promises to write every day.  The simple-minded and loyal Snuffy promises to visit him at his new home, and everybody cries for a bit. 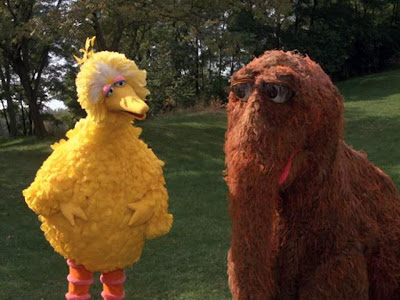 This was when I thought, "What would someone who had never seen Sesame Street before think of this scene?"

After Big Bird promises to write and count and read and breathe and eat, he bids farewell, as Miss Finch coldly tells him to not look back at his old friends. 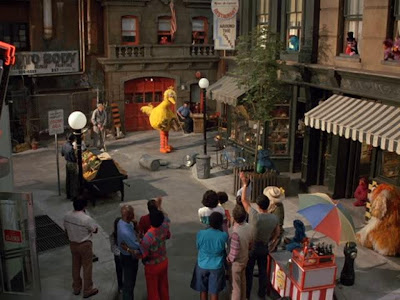 Why...why would someone say that to a child?

Big Bird flies (by plane) to Oceanview, IL where he meets his new family at the airport, the Dodos.  And much like their name, they are complete imbeciles.  After it takes them a while to accpet that this giant yellow bird is the one they were supposed to meet, they welcome Big Bird to the family, calling him "Big Dodo." 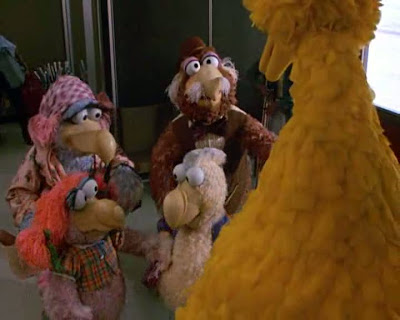 This is not going to end well.

They drive Big Bird to their home out in the suburbs where it's quite easy to tell which house on the block is theirs. 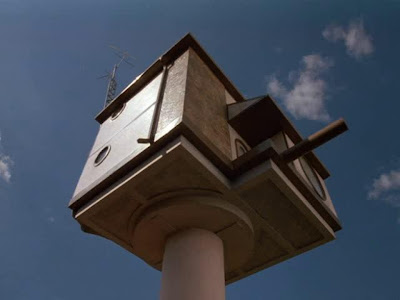 It's the one that says, "Dodos" on the mailbox.

Big Bird writes a letter to his friends back on Sesame Street, explaining all the weird things his new family does.  None of them are actually too weird (except for their daily worm hunt that never results in any worms) but they are too different for Big Bird to handle all at once. 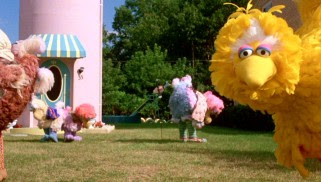 The final and most crucial difference that are shown is Big Bird's adoptive parents finding themselves unable to kiss him good night.  This hits Big Bird the hardest.

He closes his letter, "I should be happy here.  What's wrong with me?"

That's the kind of movie we are getting ourselves into.  Tomorrow, Big Bird decides enough is enough and starts his long journey home.  Adventures will unfold, but there will be a lot of strife along the way.  Get ready to follow that bird.
Posted by John H. at 8:38 PM