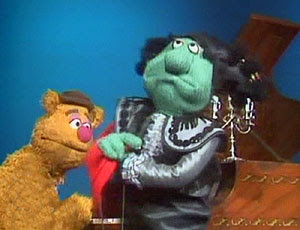 The spirit of a bullfighter.

In the middle of the show, Fozzie finds himself alone on stage with a piano.  Although he is not the resident piano player, he does possess some musical skills, so he begins plinking the keys.  Just two simple notes, back and forth, without any reason.  Suddenly, the matador arrives and accompanies him on the piano, playing "The Toreador Song" from the opera Carmen.  (Clip begins at 7:15, click here to jump straight to it)

The matador fails to get very far in the song, for his presence has attracted a bull, which then proceeds to ram into the piano and piano players, cutting the song short. 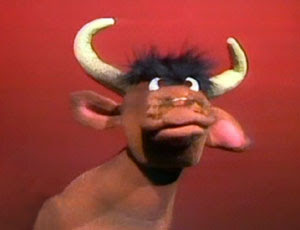 When you mess with the piano, you get the horns.

The term "matador" is actually a translation failure.  In Spain, a bullfighter is actually called a torero, based on the Latin taurus for "bull."  Toreador is an older alternative of the word, but outside of Carmen, it is never used.  Torero refers to anyone who participates in a bullfight, but the leader of the bullfighters is the matador de toros, or "killer of bulls."  This has been shortened to "matador" in popular speech, even though on it's own, the word just means "killer."

The line between life and death is never more apparent than it is in the bullfighting ring.  The ritual of bullfighting traditionally ends in the death of the bull, but if the bullfighters are not careful, they may find themselves at death's door.  There are three stages of the bullfight, with the first two serving to weaken the bull.  The final stage is when the matador enters with his signature red cape.  Although the bull is now wounded, it is also angrier, fighting for it's life, making the final round the most dangerous.  Skilled matadors often display their talents by getting as close to the bull as possible during their fights.

In the sketch, the entrance of the matador is signified with a set change.  The blue background fades to read almost immediately, letting the audience know that death is imminent.  Unfortunately, this matador is either very cocky or just extremely unaware of his surroundings, because he turns his back to the danger in order to play his theme song. 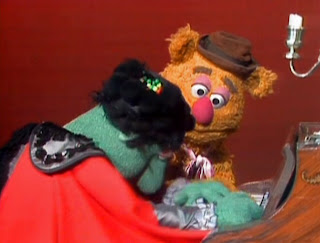 Courage or stupidity?  It's all the same in the end.

Although the opera is set in Spain, Carmen was composed by Georges Bizet, and so the lyrics are in French.  The matador plays the most recognizable snippet from "The Toreador Song":

Translated in English, we have:

As you can see, this verse exhibits exactly what makes bullfighting so irresistible to the matador.  The "black eye" of death is always present, but all he can think about is the adoration that will await him when he succeeds.  He is blinded by optimism because the moment he gives into fear, all will be lost.

However, the music, the feeling of fame and fortune, has too strong of a grip on the matador and he fails to avoid the bull almost immediately.  One does not become a matador overnight.  He must have the appropriate skills to earn his rank.  So, when he fails, it is not just a simpleton's slapstick.  It is the fall of a great, if arrogant, man.  His fate is a punishment worse than death.  He is now a failure, and he can no longer receive the love he so craves.

The matador only appears this once, and it appears that Fozzie conjured both him and the bull into existence, simply by playing his theme.  We are not seeing an actual bullfight.  We are seeing the spectral afterimage of a matador, doomed to repeat his failure in the afterlife, clinging to his song, his one moment of glory.