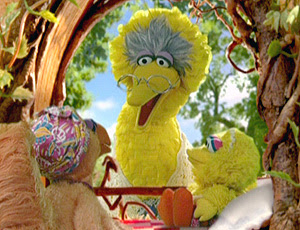 Most Significant Appearance:  Sesame Street, Unknown episode that aired between 1992 and 2001

For a majority of the series, Big Bird's relatives were few and far between.  Except for his assorted international "cousins," the audience only heard about Big Bird's family through anecdotes.  And, outside of one early mention during the first year of the show, Big Bird's parents just didn't exist.  There was never any explanation given and one was left to assume that they were either dead or out of the picture.  It wasn't until 1992 (when the cast had a spare Big Bird puppet to remodel) that we finally met someone who helped fill in the blanks in Big Bird's past, Granny Bird.

Granny Bird had been appearing in storybooks since 1980 and had been mentioned in passing various times, but nothing is official until we see it on screen.  Granny Bird's first appearance was a sort of re-telling of "Little Red Riding Hood," in which Big Bird went to visit his grandmother on Grandma's Day.  Upon arrival to her house, he finds a big wolf sleeping in the bed. 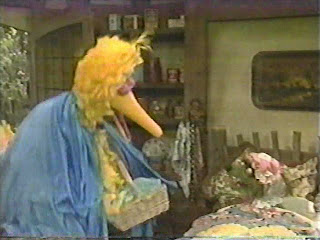 My what no beak you have!

After much confusion, Big Bird learned that he had the wrong address, and he had actually barged in on the innocent Granny Wolf.  From this episode, it appears that Granny Bird's house was within walking distance, but as we'd see later, this would not be considered canon.

The more official version of Granny Bird appeared in a later episode, in which it was clear that she lives so far away from Sesame Street that she has to travel by plane to get there.  When her flight gets canceled, Big Bird feels sad, and then flies off into an uncontrollable rage.  When Granny Bird eventually does arrive, Big Bird is still very upset and his grandmother leaves again, thinking it would be for the best.  This causes Big Bird to spiral into a deeper, enraged depression.  Finally, Granny returns to talk with Big Bird, explaining that although she can't always be with him, she still loves him. 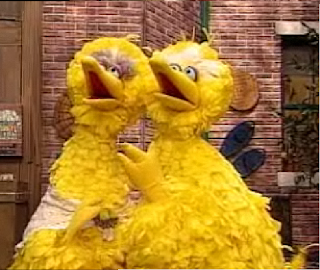 And they sing the blues away.

Granny would make occasional visits throughout the series, and her advice would stick with Big Bird, even when she wasn't around.  But at least he felt safer, knowing she was out there. 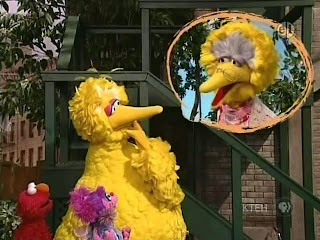 "Remember to use the force."

As a representative of children, Big Bird must deal with some very difficult issues that he barely understands.  He usually remains happy-go-lucky, but he can't always stay positive.  Like many children, Big Bird suffers from parental abandonment issues.  Both of his parents have removed themselves from his life, and the closest relative he knows lives too far away to take care of him.

Granny Bird doesn't show any malice in her actions, but she may not realize the impact her absence has on this young child's life.  In one very important episode that was patterned after the Hurricane Katrina disaster, Big Bird finds his nest destroyed by a storm.  Without a place to live, he calls his grandmother to tell her the news.  She responds with some sagely advice, "Get twigs," meaning it is time to rebuild.  And while that is an important message, perhaps rescuing your newly homeless 6-year-old grandchild may also be on the agenda. 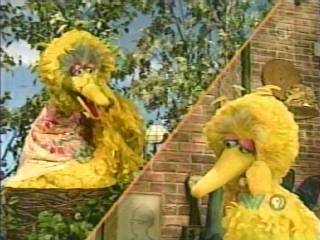 Oh, so, you're not going to help a child in need?  That's okay, I guess.  Talk to you again soon.

Granny Bird has been removed from Big Bird's life since Day One.  In the prequel series, Sesame Beginnings, Granny Bird delivers a newborn Big Bird to his aunt Nani, who serves has his primary guardian throughout the series.  Taking care of an infant is a big responsibility, and it appears that Granny Bird is just not up to the task.

Nevertheless, Big Bird loves his grandmother unconditionally, and this is why he is driven to such anger when he is deprived of her presence time and time again.  She frustrates him, but also inspires him.  He stockpiles every piece of advice she has ever given him, because she is the one he trusts wholeheartedly.  She may not be aware of the damage she is doing to his psyche and self-esteem, but she tries her best to be a good grandmother when she is present.

This is classic case of a neglectful parent.  But I don't blame Granny for this scenario.  The entire Bird family is filled with hidden issues that are never discussed.  Perhaps she is actually doing her best to see Big Bird whenever she can and it is actually his parents that are causing the distance.  As we stated before, Big Bird's parentage was only mentioned just once.  It was in reference to a gift he received from his mother.  His father is never mentioned.

Because this is a children's show, we must tread carefully.  Sesame Street has dealt with heavy issues in the past, but the mysteries surrounding Big Bird's family may be the heaviest of them all.  His father is completely absent, and perhaps was never known.  His mother is alive, but is never seen and has never visited.  Is she in some sort of correctional facility?  Does Granny have to care for her well-being, forcing her to abandon Big Bird for extended periods at a time?

Not every child has a happy home life.  Many are moved into foster care and halfway houses due to the issues with their parents and family.  They are too young to grasp why life is so difficult for them and they must find makeshift father figures and mother figures in the people the see the most consistently.  Their teachers, their case workers, their neighbors.  Sesame Street may be the best possible setting for Big Bird to grow up in and Granny Bird has placed him there to shelter him from the dangerous truth.

She still loves him, even if she can't always be there. 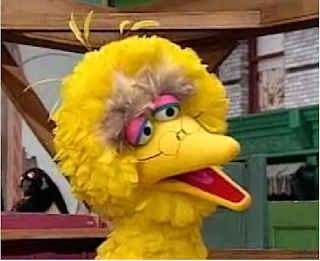