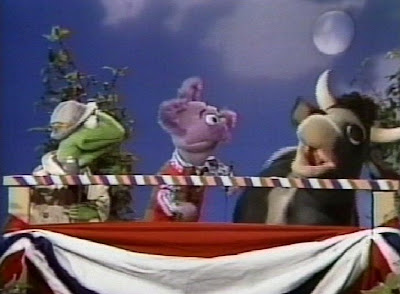 The cow that boldly went where no cow has gone before.

During the "Sesame Street News Flash" segments, reporter Kermit the Frog would visit a well-known fairy tale, fable, or nursery rhyme in order to get the inside scoop of what really occurred in these familiar stories. One day, he found himself in the middle of "Hey Diddle Diddle," just as the cow prepared for it's famous moon jumping. Kermit briefly interviewed Natalie the cow, as well as her manager, the fiddle-playing cat. Despite Kermit's lack of faith that the feat could be accomplished, Natalie leapt away and managed to impress the crowd with her extraterrestrial accomplishment. 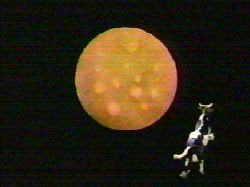 Bovine history in the making.


After a nail-biting re-entry, Natalie returned to Earth, safe and sound, and she would forever go down in history as the cow who jumped over the moon.

Cows are simple creatures. They spend their entire lives eating grass and producing milk, providing a valuable service, but never amounting to greatness. The most famous cow is probably Mrs. O'Leary's cow whose claim to fame was knocking over the lantern that started the Great Chicago Fire of 1971. And that was just an accident. This cow didn't seek or desire fame. She was just a bystander, content with her life and suddenly forced into the history books by way of a freak accident.

Natalie also started as yet another nameless cow, bound to a life of obscurity and insignificance. But, like all great Muppets, Natalie was a dreamer. She was going to do something big. Something that would not only set her apart from other cows, but would set her apart from all other Earthlings. 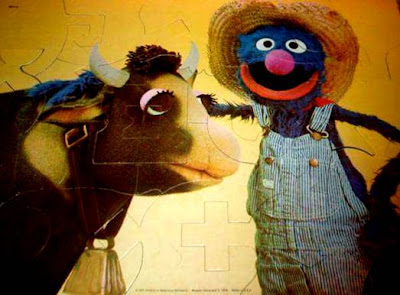 She would no longer be just that random cow on the Farmer Grover jigsaw puzzle.

When Kermit asks her why she would even consider jumping over the moon, Natalie retorts with George Mallory's famous response to the question about his reason for climbing Mt. Everest: 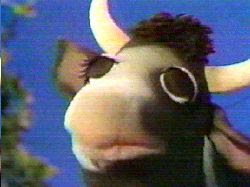 Isn't that the whole reason man also traveled to the moon? Every night, our ancestors looked to the skies, looking at the great celestial beast that was always out of reach. To be able to say that you have kissed the surface of the moon is an incredible distinction. It's something that was once thought impossible, except to the dreamers. There is a Ray Bradbury anecdote making the rounds lately, in which he called up random people that he had met at a function many years earlier who ensured him that man would never walk on the moon. On the night of the moon landing, he called them to revel in their stupidity and narrow-mindedness. To the unintelligent, the smart appear crazy. Fortunately, Natalie didn't listen to her naysayers.

She went on to explain that she wanted to prove to all other cows that they can do anything they set their minds to. She doesn't just want glory. She wants to be a role model, inspiring everyone she represents. All the cows watching at home were changed that day. They finally saw one of their own making a difference, doing the impossible.

And then, without a moment's hesitation, as the cat's fiddle fiddled the "Wild Blue Yonder," she took off. 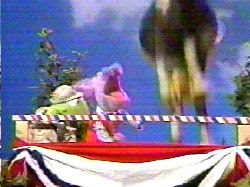 No one knows exactly how she did it, or why she was so strong. Perhaps she herself didn't know what would happen. But she tried. And the results were miraculous. 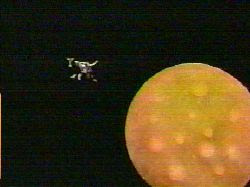 While "the cow who jumped over the moon" is a familiar phrase in folklore, it wasn't until Sesame Street that we really understood what that fantastical phrase entailed. Behind that simple line lay a story of determination, resolve, and empowerment. Here was someone who didn't let any barriers stand in her way, whether they be dictated by her species, her gender, or the laws of physics. She aimed for a goal and reached it.

The cow jumped over the moon, and came back a hero.
Posted by John H. at 9:57 PM