After Big Bird's dismal show, a couple of kids meet him backstage and he tells them to call Sesame Street for him.  They get in touch with Bob who relays the message to the traveling gang who are filling up at a nearby gas station. 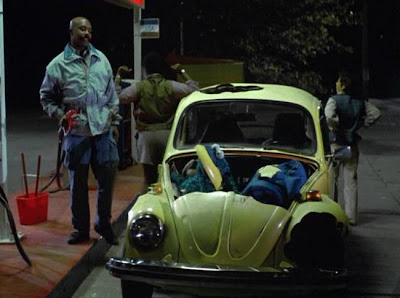 The team bands together to break Big Bird out of his cage.  Early in the morning, while the Sleazes are sleeping, Linda manages to swipe the keys to the cage.  Unfortunately, just as they manage to find the right key, the Sleazes wake up and drive off with Big Bird in tow.  Gordon and Olivia take off in hot pursuit, and Gordon decides that it's time for the movie's big action sequence. 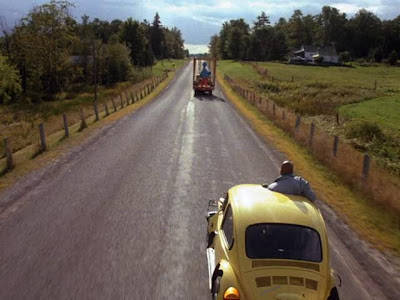 Grab on to your seats!  It's going to get crazy.

Gordon decides that the best course of action is to have Olivia drive as close as possible to the cage(!), then he'll stand up in the hoodless trunk(!!), and Big Bird will have to jump from a moving vehicle onto another moving vehicle(!!!!!).  Big Bird and Gordon have a nice long discussion about how unsafe this is and how no child should ever do this and Big Bird shouldn't even be standing, but these are special circumstances and Gordon is giving his permission just this once.  The Nostalgia Critic summed up this moment quite nicely in his review:


Despite looking as if Big Bird is going to fall to his ghastly death, Big Bird manages to make it safely onto Gordon's car. 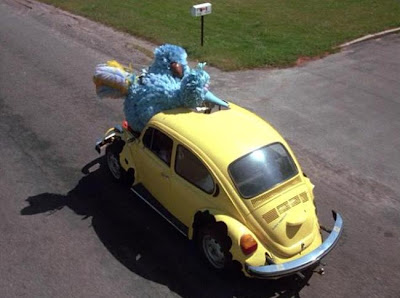 Seriously, kids, do NOT do this, EVER!

Big Bird finally gets to be reunited with his friends and Officer John Candy pulls over the Sleaze Brothers and sends them to jail for all the crimes they've racked up.  My personal favorite is "impersonating a nun." 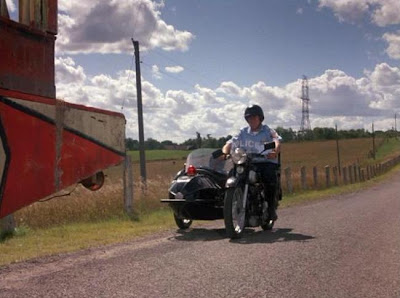 It's an SCTV reunion!

We rejoin our friends back at Sesame Street where everyone turns out to see Big Bird's arrival. 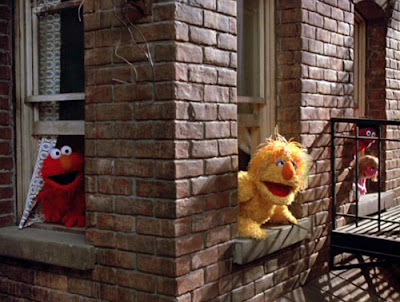 Even Elmo showed up with barely any lines!  He'll get his revenge in the next movie...

Everyone is happy, but we still have Miss Finch to deal with.  She arrives to admit that while the Dodos may not have been a right fit for Big Bird, she has found an even better bird family for him.  But the citizens of Sesame Street protest, saying that Big Bird belongs with them.  They are his family.  Maria lists off the many types of creatures who live on Sesame Street in harmony.  Humans, cows, dogs, birds, monsters, grouches, even Bert and Ernie! 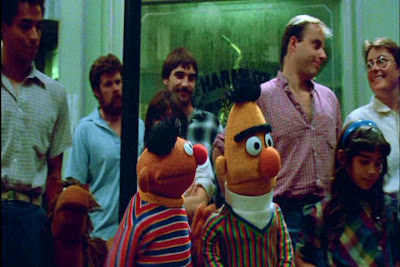 Why did she single us out, Bert?

Miss Finch finally relents and states that if Big Bird is truly happy here, she has no right to take him from the people who love him and take care of him.  It's a nice ending, though I which we had gotten a brief scene featuring the new family she had found, living in a bird mansion and being the most perfect family imaginable. 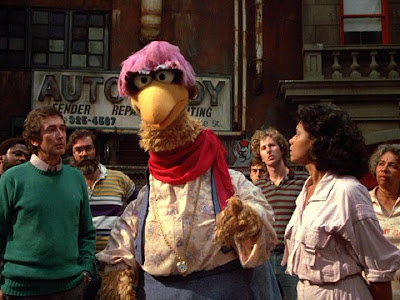 The new family has a swimming pool, but if you want to stay in your trash heap, fine by me.

After Miss Finch leaves, Big Bird goes to reunite with Snuffy who kept his nest warm this whole time. Aww, how nice! 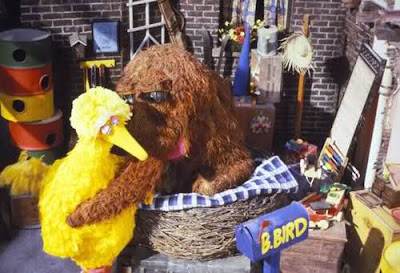 Everything is back to the status quo.

And finally, Gordon and his posse arrives with a lot of 'splainin' to do to his wife. 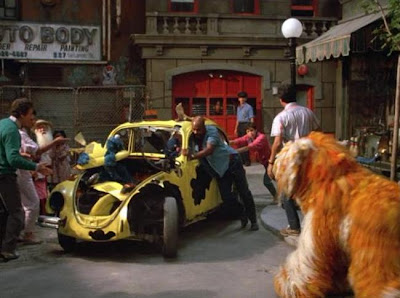 Why did we even bring Cookie Monster in the first place?

The Count counts the credits for us and Follow That Bird draws to a close. 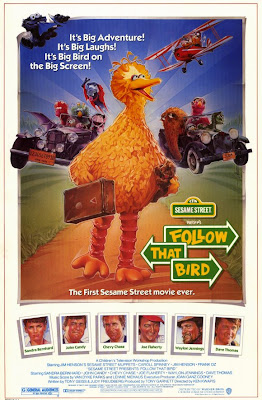 Follow That Bird is a movie that should and should not exist.  With so many episodes in the Sesame Street library, one grows used to a certain rhythm and flow.  The movie mostly abandons that and aims just to be it's own thing.  We spend very little time on Sesame Street itself, despite the effort that went into recreating the set so it looked nice for the camera.  It's still a good movie for kids, as it has a great message, catchy songs, and familiar characters.

But the movie is really divided into "Big Bird" and "everybody else," which creates a lopsided feeling. Big Bird spends a majority of the film in new locations and meeting new characters.  Like many of the "Big Bird travels" episodes of the show, it's fun to see this character under going new experiences.  Like Peewee's Big Adventure, we get to through this colorful character into the real world and see how he adapts.  Unfortunately, the people he meets are either too nice or cartoonishly evil.  It's as if Sesame Street has spilled out into the real world, rather than being a little haven unto itself.  As such, there is never a real sense of drama.

Big Bird longs to get home, yet the America he journeys through is quite pleasant.  Had there been more danger or unusual situations, then we as an audience would have felt Big Bird's pain.  The only negative moment he finds himself in is the "Bluebird" scene, and that's why the scene resonates so strongly with kids and adults alike.  Big Bird is finally in actual peril.

The rest of the cast as very little to do, both humans and puppets alike.  Each puppet does their main schtick, but none of it fits into the overall story.  Part of my issue is that I am confused about Big Bird's relationship with the people coming to rescue him.  On the show, Big Bird is closest with the humans, Snuffy, and, ironically, Oscar the Grouch.  Yet, the humans all behave a single unit of normalcy, and Snuffy stays home.  The reason I enjoy Oscar's scenes so much is because he's actually making the most of a bad situation and having fun.  I mean, it would have been nice if he showed he cared at least once (and he kind of does at the very end, when he takes a stroll around the block), but he still provides the funniest scenes and commentary on the whole situation. 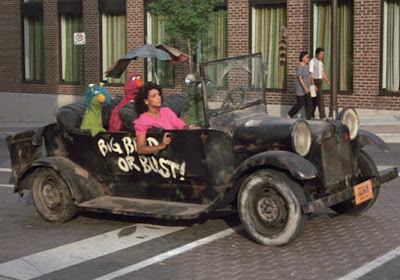 On it's own the movie is very solid and it is a great addition to the Henson film canon.  Director Ken Kwapis (The Office, Freaks and Geeks, The Sisterhood of the Traveling Pants) does a great job with the comedic aspects as well as the more tense moments towards the end of the film.  If I were to rank it with the original three Muppet movies, I would place it at #3, above The Muppets Take Manhattan.  I wish the movie had done a lot more with the premise and explored the drama a little more, but what we have is just fine.  It feels like a Sesame Street movie, even if it doesn't necessarily feel like a Sesame Street episode.
Posted by John H. at 4:17 PM