Love in the Fix-It Shop, Part 4: Alone Together

The term "honeymoon" is based on the phrase hony moone, meaning "good or sweet month."  It referred to the idea that the first month of marriage is the sweetest, the love is the strongest, and everything that followed would never live up to those initial feelings of marital ecstasy.  The word eventually became attached to the traditional holiday taken directly after a wedding, in which the couple could escape their responsibilities of life and enjoy their new marriage.  Originally, this vacation would last a whole year, with the intent of using this time to start a family.  But, as the average vacations grew shorter, the term "honeymoon," became more appropriate.  No matter the length, the time is to be spent alone, together with your new partner.

The first week of the 20th season of Sesame Street focused on Maria and Luis's honeymoon. The two planned on taking a camping trip to the Adirondack Mountains. After a slow start, involving missing pigs, broken down cars, and excessive packing, Luis and Maria were finally ready to leave the street. All the neighbors turn out to bid them farewell and add more camping supplies to their already heavy load. 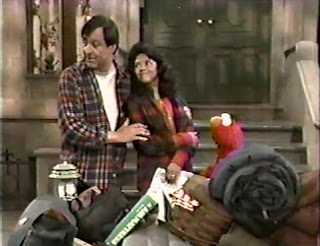 Think we got enough stuff? 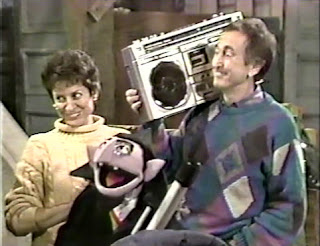 Let's not forget the boombox and telescope... 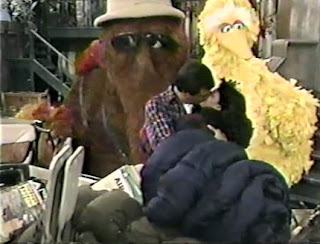 ...and our Snuffleupagus and Big Bird.  Wait a minute...

Yes, of course, Big Bird wants to tag along as well, and the newlyweds must tell him that a honeymoon is their chance to be "alone together." Rejected, but accepting of the whole situation, Big Bird lets them leave. With all annoyances taken care of, Luis and Maria hit the road. 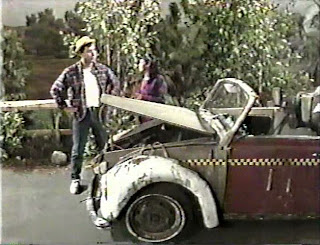 And then, tragedy strikes!

Apparently, Oscar's car isn't the most reliable vehicle to use on a road trip. Once again, in the middle of nowhere this time, the car breaks down, leaving the couple stranded. Fortunately, another pair of newlyweds happen to be driving by, and they are doing to the exact same campsite! Unfortunately, they are Muppets, and that means they are not going to leave you alone no matter what. 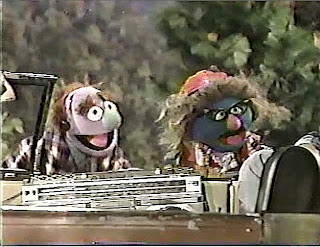 Maybe you should just wait for a tow truck.

The new couple is named Ingrid and Duane, and they are extremely excited to share their honeymoon with some new friends. They give the two a lift to the campsite and help them set up their tent. They insist on remaining together the entire time, but finally, Maria convinces them to leave them alone. The Muppet couple heads into town for dinner, leaving Luis and Maria to themselves...and a swarm of wild animals. 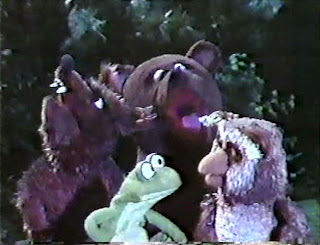 Needless to say, Luis and Maria aren't going to be getting any relaxation any time soon. 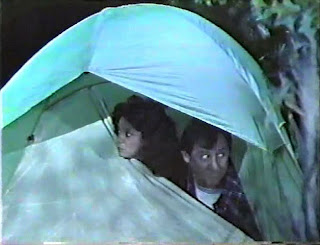 Is this love or is it terror?

Back at home, Big Bird impatiently waits for any letters from Maria and Luis, signifying a return home. He resorts to making up his own pretend honeymoon and spends it with Susan, just so he can see what all the fuss is about. When he tires of that, he decides to write Maria and Luis a letter instead, regaling all the mundane activities did while they were gone. 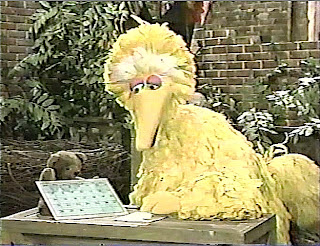 Dear Luis and Maria, still on this bloody island.  Today, I swallowed a bug.

Meanwhile, the honeymoon from hell continues. Ingrid and Duane have appeared to take the hint, giving Maria and Luis their space, although their portable television presents a nuisance. As if that weren't bad enough, television begins to invade their real life as game show host Sonny Friendly intrudes and forces the two couples into an impromptu game show. 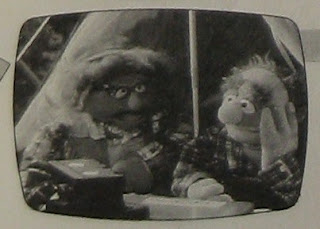 Why watch TV when you could be ON TV?!

Ingrid and Duane of course have a blast, but Luis and Maria just want to escape.

Back at home, everyone is clamoring for the return of Maria and Luis. Taking a cue from Big Bird, everyone writes about their week without the couple and they even prepare a large "Welcome Back" banner, with a nice succinct message:


WELCOME HOME, MARIA AND LUIS
We missed you.  We hope you had a
great trip. And didn't get an earache
or a sore throat.  We hope you met new
people that you liked a lot... But that
you still like us a lot.  Don't worry,
Gina fed your cat.  Love from everyone
on Sesame Street.
THE END 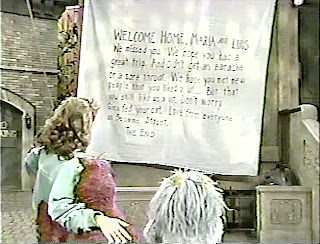 Short and to the point.

But Maria and Luis are returning later than expected. Their car is still broken, remember? For you see, when you drive a Grouch car, you get a Grouch mechanic. And Grouches love things that are broken. (So why are there even Grouch mechanics in the first place?) 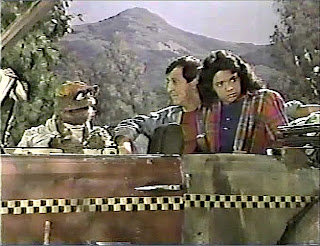 I'm not gonna fix your car.  But I'll still take your money.

Finally, Luis and Maria push the car back home, and they are just ready to be done with the whole thing. This wasn't how they wanted to start their marriage. This was the honeymoon. The sweetest, best moment of their lives. The times that they were able to be alone without any troubles. With a honeymoon this awful, that has to be a bad sign for the marriage, right?


But when they finally return home, late at night after everyone has fallen asleep waiting for them, they see a sign that suggests that everything is going to be okay. 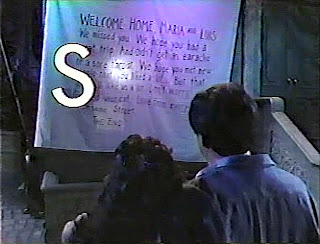 Newlyweds are so focused on "getting away from it all" they sometimes forget what exactly that entails. Yes, they are about to spend of the rest of their life with someone they love, but what about the people who continue to love them? They don't cease to exist. Luis and Maria belong on Sesame Street. The neighbors can be crazy and omnipresent, but they care deeply about each other. If you need something, even space, they'll provide it . So why avoid them so hastily? It's good to be alone, sometimes, but it's better to be alone together.
Posted by John H. at 9:09 PM