That was the ending of yesterday's episode, where Luis and Maria fell in love and already we have a theme of Luis and Maria being bombarded with questions about marriage, whether they like it or not.  This continues for the next 51 episodes!  Not every episode is directly about Maria and Luis, but the buzz about their impending marriage is ever present.  But for the new couple, all they want to do is love in peace. 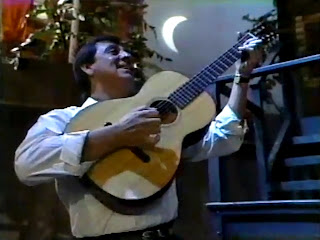 Luis serenades Maria with a cover of the Sesame Street theme.  Seriously.  What else would you expect?

At the forefront of "Operation Fix Up the Fix Its" is Big Bird the Subtle. When the two don't move fast enough for his liking, he takes matters into his own hands and starts mailing out fake wedding invitations to his friends. Bob receives one and becomes dead set on performing a song at their wedding called "Love in the Fix-It Shop." I thought the song was pretty good, but Luis and Maria are less than pleased.

Big Bird's influence has spread like wildfire and soon everyone takes this Luis-Maria relationship personally.  With Luis's resistance to accept the inevitable, Sesame Street's local lothario Placido Flamingo swoops in and tries to croon his way into Maria's heart. 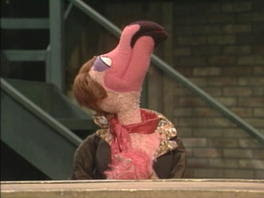 He has the voice (and feathers) of an angel!

Despite the fact that Maria could have made a different sort of Sesame Street history by accepting Placido's advances, she tells him off.  Like Pepe le Pew, he insists in his pursuit because Luis isn't around to stop his love.  Even when a Maria-voiced duck is brought in to appeal to the Flamingo's avian persuasion, Placido blows her off, stating that he'll only love the one true Maria.

But Muppet-on-human lechery can only go so far, and eventually, Placido must resign to the truth that he and Maria are of two different worlds.  If only Luis had been more forward in his love and not taken it for granted, none of these issues with their neighbors would keep popping up.

Finally, the tension on Sesame Street builds to a boil as everybody else takes over Big Bird's duties of asking an unrelenting series of marriage questions.  Even Oscar gets swept up in the gossip, and he hates love!  With so much pressure from all their friends, it seems kind of wrong to force these two into marriage.  They have not had one day to themselves when they can just enjoy each other's company.

Taking a break from all the noise and bothersome puppets, Luis and Maria sit down to a quiet dinner with Big Bird.  Big Bird remains on his best behavior, knowing that he should no longer push and pry.  But, it is in this moment of peace that Luis has a Freudian slip, implying that this dinner would be good at a wedding.  Well, you can't really expect Big Bird to just ignore a statement like that!

He starts asking a whole slew of questions, trying to discover the meaning of Luis's choice of words, until eventually, Luis and Maria just accept it that, yes, they are going to have to get married because there isn't any good reason why they shouldn't.  And isn't that truly the best reason of all? 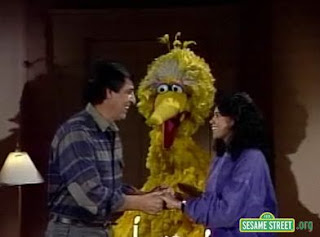 So, like all good marriages, Luis and Maria began the next step of their journey after another one of Cowboy-Detective Big Bird's famous interrogations.  I wonder how many children who watched this episode grew up to be lawyers or politicians.  Or cowboy-detectives.

When relationships are made public among a tight group of peers, the inevitable questions of marriage will rear their ugly head.  As we learned from Sesame Street, it's best to just go with the flow and say yes to the dress.  Otherwise, the two of you will have to endure days/months/years of never-ending annoyances and your love will grow from your mutual disdain of your friends.  You can't argue with results!
Posted by John H. at 9:18 PM