In the week leading up to the premiere of Manhattan Melodies, the gang continues their search for Kermit, Kermit continues to find success with the advertising frogs, and publicity for the show has skyrocketed, resulting in a sold-out opening night.  Because, if there is one thing the New York elite loves, it's musicals that have a simple title, an unknown cast, and a storyline of "young people living in New York." 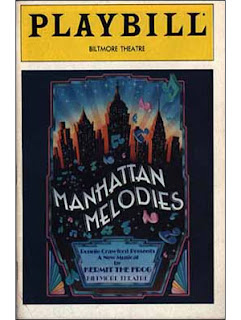 Did Jonathan Larson write this?

Finally, opening night arrives and Kermit still hasn't been found.  The group convenes at Pete's wallowing in pity as they decide the must perform the show without Kermit.  Just then, the frog firm decides to stop in the restaurant for lunch after a hard day of being boring. 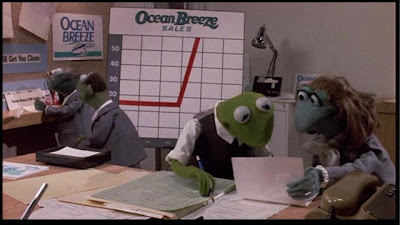 Although, Kermit did quadruple their profits in a week.  That's impressive.

As he sits in the booth next to the Muppets, Kermit begins to get a familiar vibe from the restaurant and starts playing a little tune using his spoon and some water glasses.  The Muppets recognize the tune as "Together Again," and soon they reconnect with Kermit, whisking him away to the show, despite his continued memory problems. 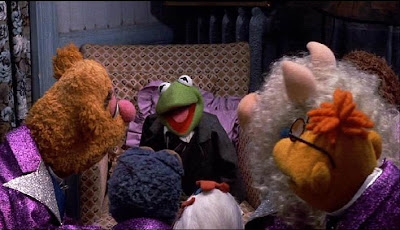 Kermit/Phil remains surprisingly calm for someone who has been kidnapped and forced to be the lead in a musical.


With his memory restored, Kermit prepares to start the show.  All the other puppets that have accumulated during the movie gather backstage to watch and Kermit decides that all the extra bears and frogs and dogs and whatever should be IN the show!  That's what the show had been missing all along!  Uh, maybe they shouldn't be taking advice from the guy just recovering from a serious head injury because that plan is absurd!  But, it's the Muppets so we have to embrace the nonsensical. 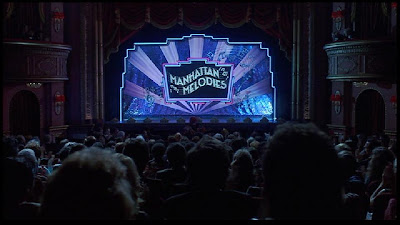 And so it begins.

What follows is sheer ridiculousness.  Like the "Magic Store" finale for The Muppet Movie we get a sped up version of the musical.  The musical starts with the opening number "Right Where I Belong," then segues immediately into the finale with "Somebody's Getting Married."  I assume it's the finale because, even though it seems to be setting up the story, it moves right into the wedding which is at the end.  It has nothing to do with Manhattan.  And somehow, all the characters who were added at the last minute know exactly what to do in the musical.  In fact, it doesn't look like the musical would have logically worked without everyone there to fill in the vacant roles.  Song's still catchy though.


As I said, this immediately precedes the wedding of Kermit and Piggy which is when things become truly bizarre, but also perfect.  As soon as we enter the chapel, the Broadway theater disappears.  The chapel has four complete walls, so the audience could no longer possibly exist at this point (and we never see them again for the rest of the movie).  This is a real chapel with a real wedding, even though the characters are still singing as if it's part of the musical.  And despite the alternate history this film has set up, the rest of the Muppets are in attendance, suggesting that this is the only "real" part of the movie that connects to The Muppet Show. 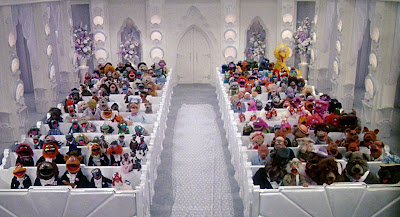 Like the end of The Muppet Movie, everyone has reunited for this special moment.  Kermit and Miss Piggy are actually getting married!  As Piggy sings "He'll Make Me Happy," the two walk down the aisle, passing all of their friends. 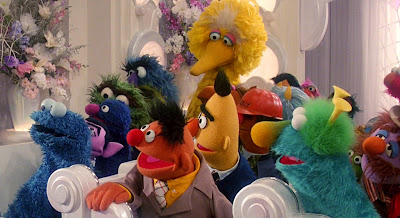 Although should the cast of Sesame Street be sitting on the groom's side?

Kermit still thinks this is all part of the show, until they reach the altar and the minister is an actual minister, not just Gonzo. 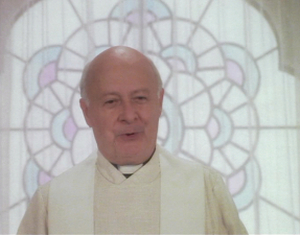 And he's not an actor.  Dr. Cyril Jenkins was an authentic minister hired for the movie.  This marriage is legitimate.

Being put on the spot, Kermit realizes that in order for the movie/musical to end properly, he is going to have to actually marry Piggy.  So, after a moment's hesitation, he says, "I do." 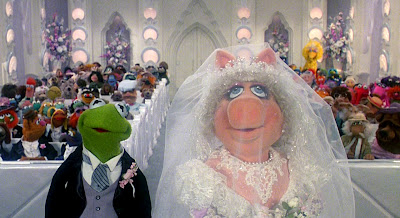 And all is right in the world. 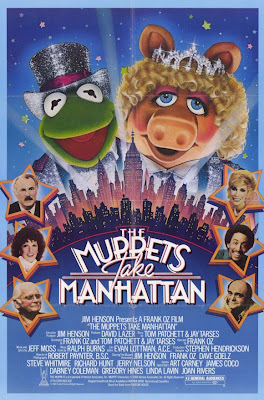 Why?  What did you expect to happen?

Of the original three Muppet movies, I find this one to be the weakest.  All three are very different films, and the stories aren't supposed to connect, but The Muppet Movie and The Great Muppet Caper are at least focused in what they want to accomplish.  The Muppet Movie is a road movie, which allows for disconnected, episodic scenes.  But it has a continuous goal and Kermit goes through a definite arc from beginning to end.  The Great Muppet Caper is looser with the comedy, but it sticks to it's basic plot and everything else is just over the top parody.  And even though the Muppets' appearances are more random, they don't slow down the film.  And once again, we have a definite character arc, this time for Piggy.

The Muppets Take Manhattan seems to have taken a few steps back.  Both Kermit and Piggy have had their personalities reset.  Kermit once again is chasing the impossible dream and Piggy is once again a controlling, egotistical diva.  In The Muppet Movie, we watched Kermit's struggle to get to Hollywood, so his meeting with Lord Lew feels earned.  Here, his script is produced through blind luck, through no effort of his own.

Yes, Kermit tried various ways to get his script noticed, but you know what he didn't do?  REWRITE THE SCRIPT!  During the entire film, he says that the script is "missing something," yet he doesn't make any changes until the very, VERY last second.  We barely get any sense of what the script is about.  Maybe that was intentional and part of the humor, but it seems weird for us to blindly follow in Kermit's dream when we don't really know what his dream is.  He wants to be big on Broadway with a script that has no substance? 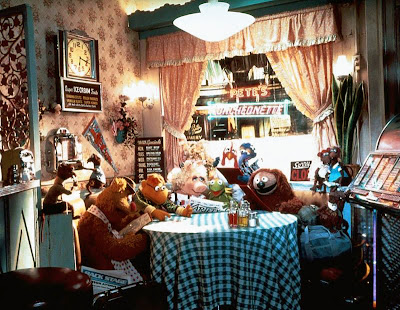 This image is not featured in the film, but it hints at a movie that had more depth to it.

The film was written in order to be a parody of "putting-on-a-show" musicals of previous eras, which were notorious for having simplistic plots and pointless musical numbers.  These musicals are still considered classics because the songs were memorable and great, but they weren't known for their amazing plotlines.  This movie definitely gives off the vibe of such a musical, but I do not get a sense of parody or satire at all.  If it's there, then it's subtle.

Like those musicals, The Muppets Take Manhattan has plenty of great moments that are perfect additions to the world of the Muppets, so I have picked out the top 5 parts you should watch if you don't want to see the whole movie.

The opening song is just fun and catchy and a great way to reintroduce the Muppets.

Jim Henson was absent for most of this movie's behind-the-scenes production, save for performing Kermit, Rowlf and Dr. Teeth.  He left directorial duties in the hands of Frank Oz, who would go on to direct some of my favorite movies.  But the one scene that had Henson's total influence was the cooking scene with the rats.  It reminds you how Henson was always looking for new ways to use puppetry and this funny scene works because of him.

The rest of the movie's silliness overshadows this early song, which, when taken on its own, is very meaningful and sad.  If we hadn't had seen all the crazy adventures the Muppets got up to after leaving New York, their absence would have been strongly felt and we could sympathize with Kermit during the film.

Even if you weren't a fan of the show, the introduction of the Muppet Babies is wonderful.

When the wedding starts, the entire movie up until this point has pretty much been abandoned.  This tonal shift is probably the best part about the movie.  The entire film walked a weird line in how we were supposed to interpret the Muppets.  The looked and behaved just like the ones we were familiar with but they had none of the history that we knew them for, making them completely unknown in the eyes of the rest of the movie's universe.  So, what history did they have?  The Great Muppet Caper set up the new backgrounds and continually broke the fourth wall to suggest that the Muppets still did everything we remember them for, just not in this story.  But this movie has no fourth wall breaks (unless I missed one).  So, when the wedding occurs, it's like we can breathe a huge sigh of relief.  Finally, all our old friends are back.  And it's special. 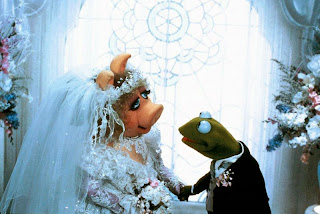 This is the movie I came to see.

The Muppets Take Manhattan is an assortment of ideas that attempt to resemble a story, but ultimately, it feels lacking.  Had the movie been more about Kermit's creative process in trying to write a Broadway musical, then the elements of parody would have been stronger and more evident.  As it stands, the movie is just an alternate-universe event where "a bunch of stuff happens" with familiar characters.  It never quite reaches the classic status that the first two movies did, but it provides enough entertainment for fans of the Muppets and Broadway musicals alike.  For me, the lack of Henson's presence is evident throughout and the failure to find a focus results in a muddled mess.

But, as Pete would say, "Movies is movies." 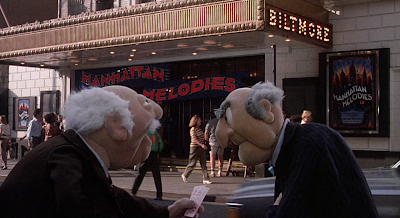