Tonight at the University of Maryland, College Park, there is an event celebrating one of the campus's most famous alumni, Jim Henson.  Periodically, the campus has hosted exhibitions featuring the work of their former student and his name drew many people to seek the university as a place to further our educational careers (myself included). 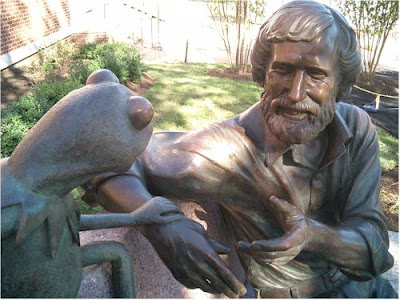 The commemorative statue in front of the Adele H. Stamp Student Union

One of the famous urban legends is that Jim Henson "created his own puppetry major" while at the school.  While this is technically false, he did major in Home Economics, using the sewing and craft techniques to enhance his puppet building skills.  It was during his time here that he met his future wife Jane and, together, they created the Sam and Friends television show at local television studios.  He graduated in 1960 and the Muppets took off. 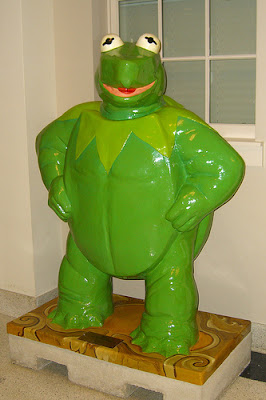 Today, we are celebrating that love of art and creation that the school helped Henson nurture.  Joining the event are a group of alumni who have followed in Henson's footsteps, becoming his spiritual successors in the art of puppetry and spectacle.  DC theater company Pointless Theatre has taken an approach to performance that echoes Henson's own mantra, building a talented family and community of performers who simply love puppetry and exploring new forms of storytelling.

Come join us as we watch some Muppet movies, share some stories, and celebrate the man who unintentionally brought us all together in the first place.

For those of you reading this blog for the first time, allow me to direct you to some previous articles to give you a sense of Henson's legacy:

The Definition of "Manha Manha"

What's a Muppet? - Part 3: The Jedi Link Between Muppets and Creatures