Kermit the Frog is the world's first three-dimensional puppet.

Before Henson paved the way for adult-oriented puppet shows, puppets were widely regarded as kid's stuff.  Puppets were comic props, designed to look funny and behave in a humorous manner.  If a human and a puppet interacted, it would likely fall into the traditional vaudeville routine of a straight man dealing with the antics of a simple-minded caricature.  And the human would always play the straight man.  While the human would occasionally comment on the behavior of the puppet with sarcastic asides, it was the puppets job to dispense most of the jokes.

Kermit began as one of these humorous puppets.  He often played the hapless victim, getting devoured by larger creatures.  His innocent nature allowed him to evolve into the casual observer of his odd surroundings.  As the Muppet empire began to take shape, Kermit would become the recognizable face used to host or narrate specials.  Being the most famous Muppet at the time, Kermit was included as a character on Sesame Street to attract new viewers.

Unfortunately, due to the conceit of the show, all of the new puppets were to be portrayed as young and uniformed so that the adult humans could teach them lessons about letters, numbers, sharing, etc.  Kermit was not like these puppets.  He was as intelligent as the adults.  He did not really belong on Sesame Street.  He would eventually become the host of The Muppet Show, using his smarts and logic to become the de facto leader of a crazy cast of characters.

Fortunately, Kermit gained some experience in handling unpredictable moments during the "Muppet & Kid Moments" on Sesame Street.  These were segments unrelated to the rest of the show in which a child would be invited onto the set and their natural conversations with the puppets would be recorded.  The Muppet characters would usually try to engage the children in counting or reciting the alphabet, but ultimately, it was up to the children to decide what will happen. 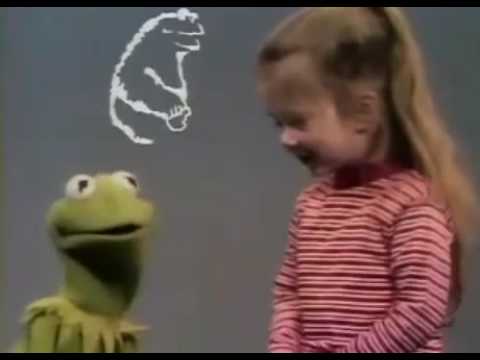 "D...E...F...G-Cookie Monster!"
Take this interaction between Kermit and a little girl named Joey.  Joey had spent a little while getting acquainted with Kermit already, but it's evident she had hoped to meet a different star of Sesame Street.


During a routine recital of the alphabet, Joey insists on replacing letters with "Cookie Monster!"  She takes great joy in frustrating Kermit as he tries to plow through and continue the song.  She continues her random joke throughout the entire segment, prompting Kermit to leave in a huff.

There is something very important going on during this segment.  If you watch Joey, you'll notice that she makes eye contact with Kermit whenever she interrupts the pattern.  In reality, she is just sitting in a bare room, on a stool, with Jim Henson crouching just below her.  Yet she never looks down at the man operating the puppet.  She is not playing this trick on him.  She is genuinely trying to elicit an emotional response from Kermit.  She understands that Kermit likes things to go according to plan, and she definitely understands that he does not find her antics amusing.  But she continues with her joke.  When Kermit finally leaves, Joey realizes that she has hurt his feelings and calls him back with "I love you."  She did not mean to cause him pain.  She just wanted him to lighten up.

It is strange that out of all the puppets Henson has performed, Kermit is his most famous, for the two are very dissimilar.  Henson loved the wacky and the absurd.  He never got angry.  He understood that everything was playtime.  Despite giving him life, Jim was completely separate from Kermit.  This has allowed Kermit to become layered and immortal.

When Kermit appears "in real life" on a talk show or news program or game show, he is still Kermit.  We treat him like a human being because he behaves as one.  Even if his lower half is obscured, we never question the validity of his existence.  Grown adults who interact with the Muppets naturally look into their plastic and felt eyes, honestly assuming that these creatures possess intelligence and personality.

So, although some may see Kermit as a bland, humorless spoil sport, it is because he has adopted the stereotypical straight man role.  He is now the everyman.  Not the everyfrog.  Not the everypuppet.  He can laugh, he can love, and he can feel pain and frustration.  All of these emotions are expressed through his unique, froggish eyes.