By 1968, Henson had already established the Muppet brand through his various variety show appearances. It now came time to show the world a little bit of what goes on behind the scenes with the Muppet folks.  Henson and his crew created an hour-long special called The Muppets on Puppets for a public broadcasting channel.  This special explored the history of puppetry, provided some examples of puppet types, showed how to make your own puppets, and explained what sets the Muppets apart from the rest. 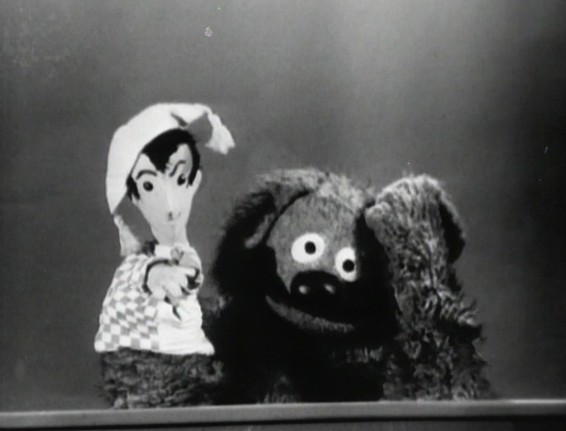 Right from the beginning, we see Rowlf interacting with the audience with his own puppet.  As is the case with the Muppets, it's easy to lose yourself in the fantasy.  You forget that Rowlf is a puppet, and that is exactly Henson's intention.  By emphasizing how lifeless Rowlf's puppet is, the audience begins to assume that "puppets" are just a primitive parlor trick.


Eventually, after showing off the different styles of puppets (hand, string and rod), Henson explains to Rowlf that he too is a puppet, which he doesn't take too well.  But even while this explicit line is drawn between reality and fiction, Rowlf is still alive.  When he exits the stage, we assume he is still going about his day, living his life.

This stands in contrast to the Punch and Judy puppets, whose voices and personalities are so exaggerated that you can "see" right through to the puppeteer beneath.  There is no interconnection between the two.  Anyone can put on a Punch puppet and do the Punch routine.  It is a pale imitation of life.  (Not to say that this portion is not informative.  I like how the crocodile puppet is used to explain the tendency for carnivorous Muppets, and the origin of the term "slapstick" is enlightening.)

Henson then introduces Frank Oz and has him perform his signature piece "The Sunday Painter."  Unlike the previous examples, this one feels more like a Muppet piece.  It's not completely there, as it lacks humor.  But the puppet's movements have that natural flow that doesn't feel hindered by strings and rods. 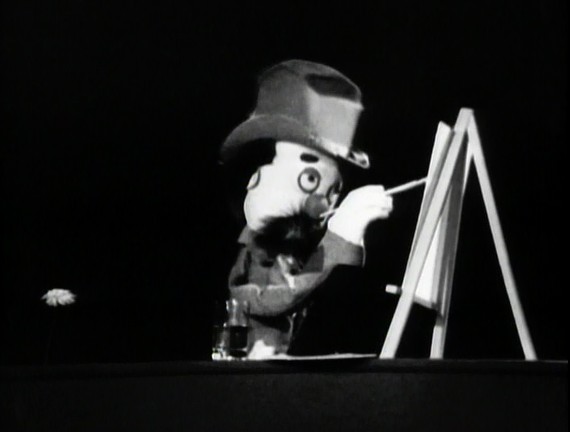 The face is a puppet, but the hand is all Muppet.


Afterwards, Rowlf having come to terms with his puppet nature introduces us to the other Muppets.  These include a turtlenecked Kermit (whose flimsy arm rods may not be anything special, but his jaws are powerful), Wontkins, the witch Taminella Grinderfall, King Goshposh (here named Louie), some monsters, and Splurge.  A few of these would become the main cast of Muppet fairy tale specials such as Hey, Cinderella! and The Frog Prince, but, as we all know, only Rowlf and Kermit remain core Muppets to this day.

Speaking of fairy tales, Henson found that his Muppets were often best suited for providing their own spins on these classic stories.  Predating elements from Tales from Muppetland, Sesame Street's News Flashes, and The Storyteller, the Muppets come together to show why they are unique as they present a fractured version of "Cinderella."


As you can see, all the humor we've come to expect from the group is there.  In a rare turn of events, Henson then shows us what the skit looked like from the back.  It's always disconcerting seeing our beloved Muppets out of action, and having Rowlf hung upside down on his hook is particularly jarring after his performance mere seconds ago.  Still, this is a great look into the Henson process, one that has stayed the same in the company for years.

Finally, we get to see how Muppets are actually made.  Don Sahlin, Muppet designer, walks us through a new character, from Henson sketch to foam to fabric.  For anyone who has tried making their own puppets, this is a must-watch.  The Muppet style is so simple in concept, yet Sahlin has perfected it so that amateurs who attempt the signature appearance of a Henson puppet will find that theirs fails by comparison.  He points out how Henson specifically created a style of craft which he calls "the Henson Stitch" because he had never see it done before.


One aspect that was not mentioned in this piece was the importance of the Muppet's eyes.  To me, this is what makes or breaks a "Muppet."  If you look at almost all of a Henson character's eyes, you'll notice there is something similar about them that you can't quite put your finger on.

They are white with black pupils?

If you haven't spotted it yet, try looking at this random assortment of "plain" "Muppet eyes." 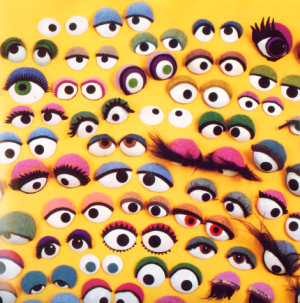 Is it the colored eyelids?

Despite the simple appearance of these basic cartoon eyes, there is a purposefully crafted decision that changes them from regular to Muppet.  The pupils of Muppet eyes are almost always placed slightly inwards, creating a subtle "cross-eyed" effect.  This creates the illusion of focus and it's the reason why adults and children alike fall into the habit of forgetting there is a puppeteer attached to the Muppet.  We are naturally drawn to a Muppet's face because they look as if they are actually looking at something.  When they look us, we feel as if they are capable of sight.  They look us in the eyes.

The rest of the special is worth watching and I've posted it here.  In the remaining clips, you'll see Henson and company mix-and-match attributes to create a variety of characters out of a Whatnot puppet, find new inventive ways of creating complex puppets, and perform a new fairy tale performed with puppets made from simple arts and crafts.  This latter skit is great because the "Muppet" feeling comes across solely through the voices and dialogue rather than the appearance.

If there is one thing to take away from this special, it's that Muppets are improved puppets.  Henson took all of the knowledge he learned about puppetry, borrowed the best elements, and invented new construction methods in order to develop characters that move beyond basic puppetry.  These characters are plush toys come to life.  This style, created back in the '60s, has continued through Sesame Street, The Muppet Show, and Fraggle Rock with each show's cast comprised of cartoonishly abstract characters that were unquestionably Muppets.

However, not every Jim Henson puppet can be considered a Muppet.  Where is that line drawn?  Find out tomorrow when we look at the "Creatures."
Posted by John H. at 11:00 PM