The Muppets Take Manhattan, Part 1: Welcome to the Real World

1981 saw the premiere of The Great Muppet Caper and the final season of The Muppet Show.  After that, the Muppets practically disappeared for a while.  With Sesame Street, The Dark Crystal, and a new show called Fraggle Rock taking up most of Henson's time, the Muppets found themselves with very little to do.  Finally, in 1984, after an absence of two years, the Muppets returned for one more feature film.  And this time, they were headed to the Big Apple! 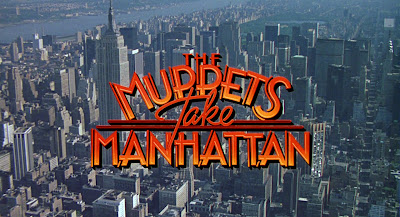 Ever since 1970, Henson knew that he wanted to bring the Muppets to Broadway.  The idea of doing a giant, musical, live performance with the Muppets had great appeal to Henson and in 1972 he proposed a show called The Muppets at Lincoln Center.  Since this was pre-Muppet Show, it would have manly consisted of a series of skits with a variety of original puppets.  Although it was approved, television became too demanding.  But, as Jerry Juhl noted, "Every couple of years, when Jim would take a week off, he would come in and say, 'We gotta do that Broadway show.'"  Based on that dream, The Muppets Take Manhattan was born. 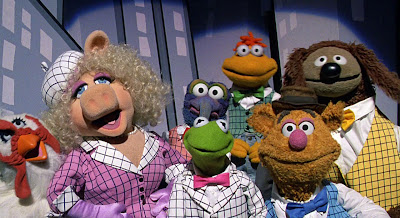 The gang is back!

The film opens similar to The Muppet Movie, featuring Kermit singing the opening song, "Together Again."  For audiences at the time, a two-year break from the Muppets was too long, so this song was a way of reuniting the gang and welcoming the audience back into the world of the Muppets.

Each Muppet movie has it's own sort of canon, so here, we soon discover that while the Muppets are as we remember them, The Muppet Show and previous Muppet movies never happened.  Kermit and his friends (Piggy, Gonzo, Scooter, Fozzie, Rowlf, Camilla, and the Electric Mayhem) are graduating college students from the fictional Danhurst College.  They are all into theater and have been performing a show penned by Kermit known as "Manhattan Melodies."  For some reason, this musical revue just drives the entire campus wild and this prompts the gang to consider taking the show to Broadway after they graduate.  Kermit his hesitant at first but decides it's worth it to follow his dream.

The gang immediately travels to New York and shack up in the cheapest living space available, since Kermit naively assures them they will be living large on Broadway the very next day. 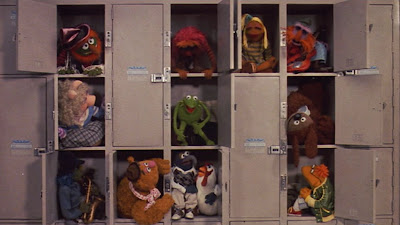 The group meets with a producer named Martin Price.  This is scene is a great moment of fantastical Muppet optimism clashing with the harsh realities of life and showbiz.  Kermit describes his show as being about true life in New York City, which he thinks will be full of songs, dancing, and laughter, but the producer assumes he means gritty crimes and murders.  Nonetheless, he bewilderingly finds their show to be a great idea, despite a virtually unknown cast and a lack of shootings.  He agrees to produce their show as long as they fund him $300 each.  That's when it's revealed that Price is actually a con artist who takes money from naive dreamers such as the Muppets.  The police arrest him, with the assistance of a wild Animal. 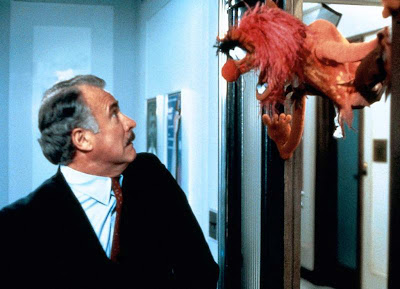 That's when the Muppets realize that their success isn't going to happen overnight.  The spend their entire summer traveling from producer to producer, with no hits.  But, they've got to keep their chin up, since they can't take no for an answer. 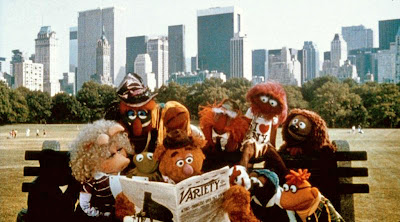 After a few months, Scooter notes that their resources have dwindled and they can only afford to spend two more nights in the city.  The group asks Kermit what they should do next and he cracks, tired of always having to be the leader.  It was foolish of them to go to New York in the first place.  Overwhelmed, the group stops to rest at the nearby Pete's Luncheonette.  As Kermit waits by the counter, Rizzo the Rat appears to take the groups order.  Since Steve Whitmire joined the Muppeteer gang towards the end of The Muppet Show, his then-current signature character Rizzo was given an oddly large role in the film. 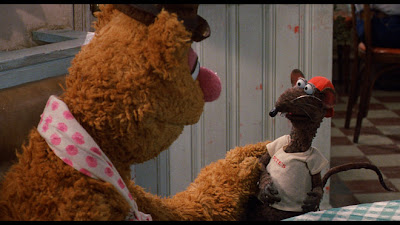 Fozzie should probably wash his hands before he eats.

At the counter, Kermit express his woes to the owner Pete, who gives him the sagely advice, "Peoples is peoples."


Since that doesn't help, Kermit then turns to Pete's daughter Jenny, who agrees help Kermit out, since she too has dreams of making it big in New York. 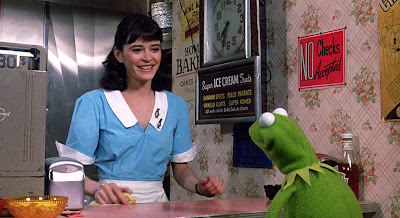 And Kermit would look adorable in that waitress outfit.

Meanwhile, the other Muppets discuss calling it quits on the whole thing, especially since they've been relying on Kermit too much.  They tell Kermit that they have had other job offers and that it's best they part ways.

It's only the beginning and already the Muppets have given up on their dreams!  We are in for a new kind of Muppet movie.

Tomorrow, everyone goes on their own journeys, and Kermit takes on the Big Apple alone.
Posted by John H. at 3:25 PM