It's Mail Time again!  Now we finally get to see what Rowlf and Gonzo have been up to all this time.  I don't know why these segments weren't included in the first round of letters.  I guess they didn't want to mess with the flow of randomness.

Gonzo is doing crazy stunts at some carnival, of course.  His routine involves him water-skiing up a ramp, through a hoop of fire, and into an imitation-leather reclining chair while his chickens squawk the William Tell Overture, of course. 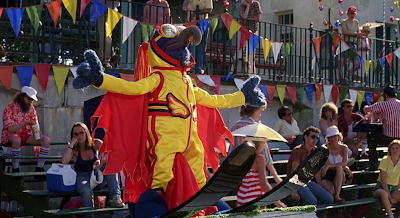 I'll give you one guess how this turns out. 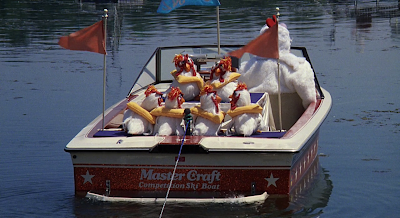 At least the chickens are wearing life jackets.

Rowlf has found a job at a kennel, and we observe an obnoxious customer check-in his prim and pampered pooch Snookums.  He treats Rowlf like a dog and is just generally disagreeable and annoying.  And this scene goes on forever because it's "funny." 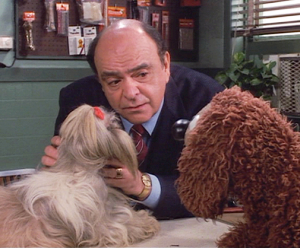 Kermit has one more letter and, lo and behold, it's actually something that moves the plot along!  We are finally back to the story!  It only took us 45 min!  A big shot producer named Bernard Crawford has somehow come across Kermit's script and has taken an interest producing it (for some reason).  So Kermit heads on down to his office and meets Mr. Crawford, who seems to be a little young to be a big-shot producer. 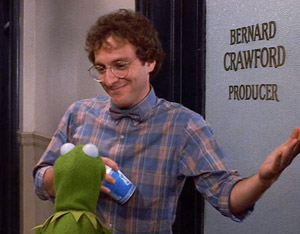 But he's got a bow-tie, so he must be legit.

It turns out that this man is actually Bernard's son Ronnie, who currently works as the errand-boy for the production company.  Apparently, his father has told him that he would give him the support to fund one show since he also wants to be a producer.  So, after what must have been an intense process, Ronnie has settled on Kermit's show.  Ronnie tells the good news to his father (played by Art Carney) and Mr. Crawford reluctantly agrees to fund the show, despite his reservations that dancing and singing animals are out of style.  The condition is that they must complete the show in two weeks, since that is the only time he has to add another project to his plate. 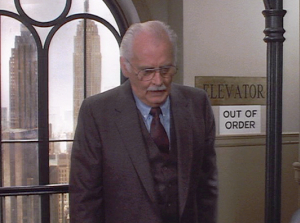 He was going to originally use those two weeks to fix the elevator, but that'll have to wait.

Kermit excitedly calls the restaurant, putting Jenny in charge of costumes and Piggy in charge of rounding up the rest of the gang.  And then he steps out into oncoming traffic and gets hit by a taxi!  That night, Piggy awaits Kermit's return, but he never shows up.  Pete tries to reassure Piggy, telling her Kermit will show up because "Peoples is peoples," but it doesn't help.  Ronnie shows up to explain the details and the two-week time limit.  While the group goes out to search for Kermit, Pete pens the message to all of the other Muppets, telling them "Peoples is peoples."

And what about Kermit.  Well, he has amnesia.  Really, movie?  Now you decide to give us a plot?! 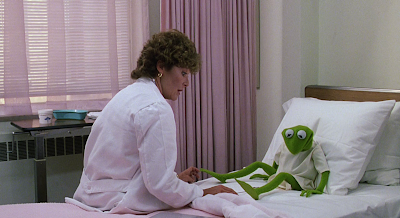 You have amnesia, so for the next 5 min, I'm going to squish your limbs and face like a plush toy.  Seriously.

*Sigh* Okay, so now, Kermit has amnesia.  The doctor suggests he go out and start a new life because THAT'S TOTALLY WHAT YOU DO WITH YOUR AMNESIA PATIENTS.  So Ragtime Kermit heads to Madison Ave to get a job. 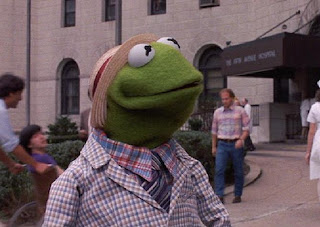 This would have been a good plan before he got amnesia.

He stumbles into a frog-based advertising agency filled with Muppeteers doing their best Kermit voices.  The frogs, Gil, Bill, and Jill hope that Kermit (or Phil, as he now calls himself) can help them determine a good slogan for their brand of Ocean Breeze soap. 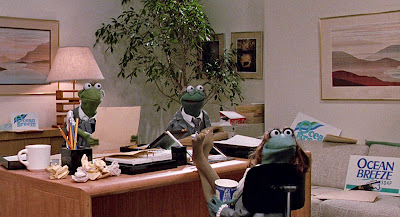 After they tell him what they have so far, ("For People Who Don't Want to Stink" and "It's Just Like Taking an Ocean Cruise, Except There's No Boat and You Don't Go Anywhere" which I think are fantastic slogans) Kermit/Phil suggests the straightforward "Ocean Breeze Will Get You Clean."  The frogs love it and soon, Kermit/Phil is hired! 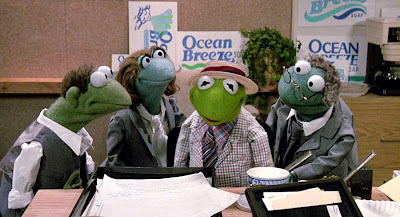 Then they all got matching versions of Kermit's outfit and started a barbershop quartet.

Oh no!  The musical is finally going to be produced and it goes up in two weeks!  And instead of being fun and artistic, Kermit is stuck in a bland, boring, non-creative ad firm!  How is he going to get out of this one?

Tune in tomorrow, for the epic musical finale that the movie has been building towards(?) all this time.
Posted by John H. at 6:15 PM