It is time for the Muppets to split up with "Saying Goodbye."  "Together Again" was a delightful romp, but this is the first song of the movie that captures a feeling in that Muppety way, making for an emotional number.

Piggy leaves by train, others by bus, and pretty soon, the gang has scattered to the wind, unsure of whether they will ever see each other again.  Many graduates have gone through this scenario, spending years of their lives bonding with an inseparable group and then finding that there comes a day where life steps in and rips them apart. 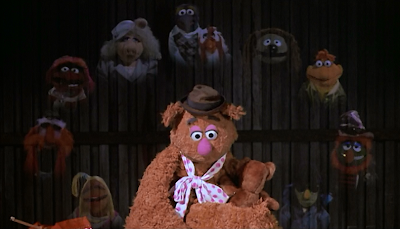 And they just become faint memories.

Kermit, always the dreamer, stays behind and wanders around the overwhelming city.  During a powerful, introspective moment, he travels to the top of the Empire State Building at night and yells at the monstrous city, resolving that he will not be beaten.  It's genuine and riveting. 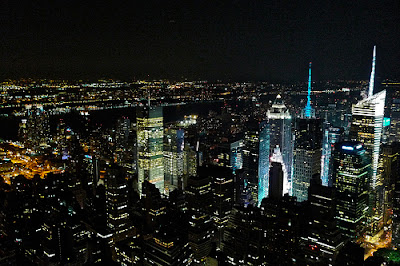 This is just a regular picture of New York at night, but this it's still breathtaking.

Then we cut to the street below where we see Piggy hearing Kermit's oath and this is where the movie begins to fall apart for a while.

Kermit returns to Pete's Luncheonette to get a job, just as Rizzo is demanding a bigger staff since he is overworked.  You would think that Kermit would be hired as simple as that, but no, Rizzo has to round up a bunch of one-dimensional rat friends to work at the restaurant first.  Pete is not pleased about the idea but he eventually relents and lets that rats work there. 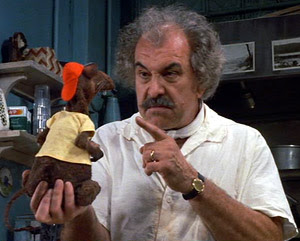 Now you may be thinking, "Oh no, Kermit will have to find a job elsewhere!" But Jenny convinces Pete to hire Kermit as a dishwasher anyway.  So, what was the point of all the rats?  We'll get to that later.  Right now, Kermit has to plan how to get his show produced and his first step is to use Jenny's costuming talents to disguise him as a fast-talking agent so he can sneak his way into a production company and get his script to the higher ups.  And the scene is just ridiculous. 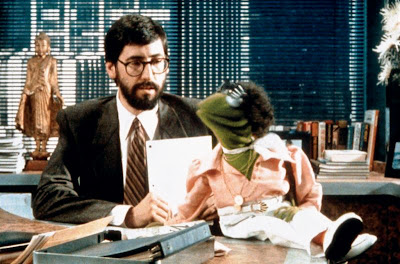 Kermit + An Afro = All Sorts of Wrong.

After saying "Boffo" a million times, Kermit leaves and the producer tosses the script right in the trash. So, all of that work for nothing, which is true to life but it's still kind of weird for the movie to focus so much on this scene for it to have absolutely no payoff.

Kermit meets with Jenny in a park to discuss the next step of his plan, and a disguised Piggy watches them grow close from afar, getting insanely jealous.  Her subplot doesn't make much sense either since she has no reason to hide and stalk Kermit.  If she was going to stay in New York, she should have just told Kermit.  If she is not communicating with him at all, then why get upset when another girl swoops in on the single frog?  You're just making things worse for yourself Piggy!

And speaking of Piggy making things worse for herself, her stalking has made her late for her new job with Joan Rivers at a perfume counter.  While angry Piggy does get some funny lines, yelling about how the perfume isn't going to change stupid men at all, the scene is another "things just happen with no effect on the plot" moment.  Joan Rivers, in order to cheer Piggy up starts playfully giving her a makeover with all of the makeup.  They have fun, and the scene as a very improvisational vibe as the two make a mess and laugh themselves silly.  Then Piggy gets fired and another scene is over. 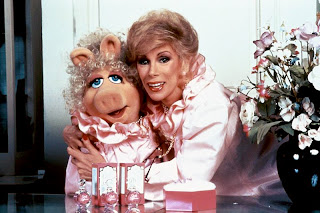 One more cameo down.

Back at Pete's Luncheonette, the customers have been complaining about the rodent waitstaff, so Pete has redistributed them all to the kitchen.  What follows next is a condensed version of Pixar's 2007 classic Ratatouille.

Technologically speaking, this scene is a marvel, seeing all of the rats preparing food in unique ways without the aid of strings.  Jim Henson was very proud of this scene, and he helped stage a lot of it.  What's most amazing was that real butter and pancake batter was used since it provided the best consistency (even when the rat was using butter pads for skating). 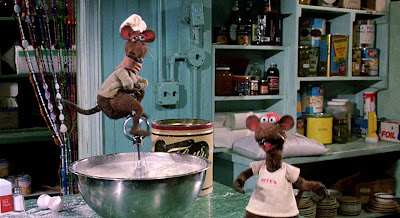 I could tell you how they got that one rat to ride an eggbeater like a unicycle, but the magic is better.

It's been 15 minutes and barely nothing has happened to continue the story and that's when Kermit receives a bunch of postcards so we can see what the other Muppet have been doing with their time.  So, we will be taking a break in the action during this extended break in the action.  Okay.  I understand that sometimes in life, nothing happens for long stretches of time, but it seems like they are just stalling at this point.

Tomorrow, more Muppety vignettes and then finally, we'll get back to the story.
Posted by John H. at 2:11 PM