On May 4th, 1990, Jim Henson made an appearance on The Arsenio Hall Show to promote The Muppets at Walt Disney World.  After the taping, he began to feel a little unwell.

On May 16th, 1990, Jim Henson died after having checked himself into the hospital the previous day.  The news came as a shock to everyone.  This man, so full of life, had provided the world with so much and he was not yet finished.  The world of the Muppets was shaken, yet Henson, in an odd way, seemed prepared for this untimely end.  He had already drawn up messages to his children and instructions for his memorial a few years prior.  So, on May 21st, Henson's family and friends were able to give him the send-off he desired and deserved.

Henson loved a lot in this world, but most of all, he loved the music.  Fittingly, the memorial played out like a soundtrack to Henson's life, playing all of his requests.  He did not want the occasion to be somber and he stated that he did not want everyone to be dressed in black.  In New York's St. John's Cathedral, it felt more like a concert than a funeral.  People shared their words, but the music took center stage.

To open the event, an organ played the Sesame Street theme and "The Rainbow Connection." Later, Harry Belafonte appeared to sing "Turn the World Around" on more time for Henson.


And there may be no moment quite like when Big Bird sang "Bein' Green." 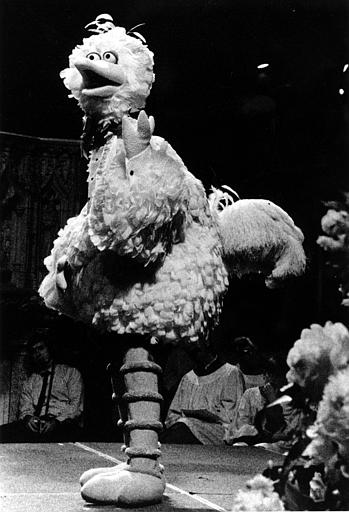 Only in the context of Henson's life would a man in a giant bird costume be apt for a memorial.

But the show-stopping moment was when Richard Hunt introduced a medley of Henson's favorite Muppet related songs.  Each of the main puppeteers came to the stage and sang in the voices of their most iconic characters.  And it all led up to the most heart-warming song of them all.


"Just One Person" originated as a Muppet classic back when little Robin the Frog needed to be uplifted.  With each puppeteer pulling out their signature puppets, the song becomes so much more.  Starting with Scooter, the song begins simply and suddenly we see Fraggles and Sesame Street Monsters join in until Fozzie and Gonzo and all of our old friends swarm the stage.  Other than Big Bird's solo, this is the only time we see Henson's puppets take the stage and it's indescribable.

By seeing the puppets with their puppeteers, we are left with the feeling that Henson didn't just touch the lives of those he interacted with, he created these lives.  Without Henson, none of these characters would be a part of our collective conscience. 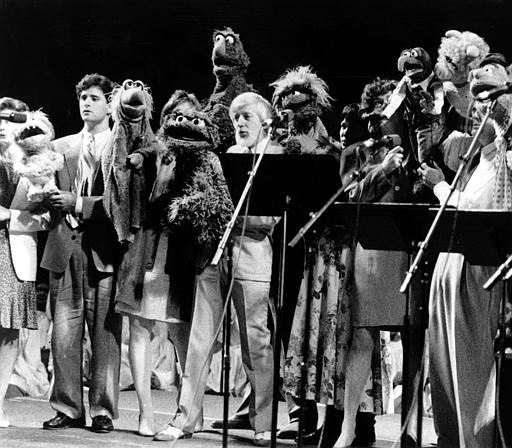 Everyone, together, for Jim.

That year, no new Muppet productions were created until November.  This new special was called The Muppets Celebrate Jim Henson and it was a way for Henson's characters to officially react to his passing.  The special finds Fozzie and the gang backstage of the Muppet Theater with instructions left by Kermit to put together a tribute to Jim Henson.  None of the Muppets know who he is, but, as they learn through anecdotes from celebrities and biographical material, they know that he is a man who touches many lives.

Some Muppets gather to rehearse the script.

They do not, however realize his relation to them (for the fact that they are puppets is something they'd rather not think about.  Throughout the special Fozzie enlists completely inappropriate acts for the show that are more in line with the Muppet brand of humor.  As an audience member watching this at home, you get a feeling of dread as this tribute becomes tackier and tackier.  Fozzie only wants to impress Kermit with his good job, but he is completely lost at how to run this whole Muppet operation without him.  Yes, it is very symbolic of what the actual Muppeteers were feeling at the time.

Finally, as the wacky celebration is about to start, Fozzie finds a folder from Kermit filled with something that should be able to help him.  At this point, it's best that you just watch what happens.

"But...we were just starting to get to know him."

The news that Jim had died places a terrible burden on the entire group.  Reality has come crashing into their fantastical world.  So of course, Fozzie does the sensible thing for once and shuts down the planned tribute.  Robin once again steps in as the voice of maturity and leads the group in another performance of "Just One Person."  Henson's memorial is virtually replicated, but this time, it's for the benefit of the Muppets and their fans.

Henson died 22 years ago today and his presence is still felt strongly.  His creations remain with us, giving us joy and comfort.  Even though a lot has happened since then, one can't help but wonder what else he could have shared with us.

It just goes to show the positive impact that just one person can have on the entire world.
Posted by John H. at 11:47 PM