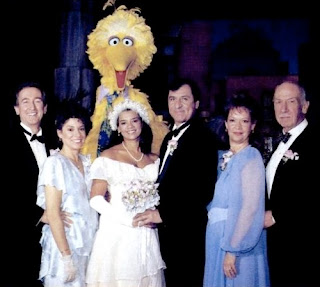 The big day has arrived!

After four long months of being in love with each other, Luis and Maria's wedding day is finally here!  But first, a brief recap of the wedding day preparations.  All the only relatives who could be bothered to show up have arrived, including Maria's mother and Luis's Tio José and that's it! 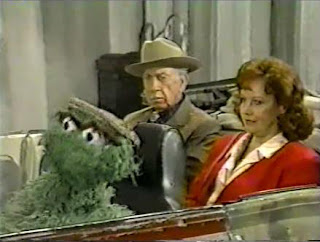 Oscar, seen here driving the representatives of the Rodriguez and Figueroa families to Sesame Street.

The dress has been bought and the tux has been rented!

Luis's wedding will be the greatest show on Earth!

And the Honkers have perfected their all-Honker cover of "Here Comes the Bride." 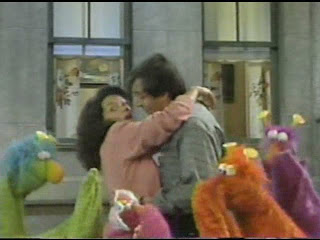 This is what you should expect when you have a wedding on Sesame Street.

Finally, the wedding day arrives, and Maria drags her maid of honor Linda to the roof of 123 Sesame Street at the crack of dawn.  Because this is her day and everyone else will just have to deal with it. 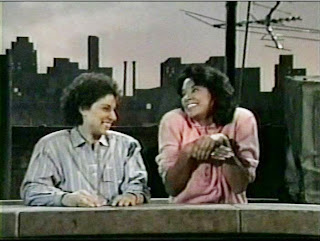 The rest of the neighborhood starts getting ready for the wedding.  The ceremony will be held on the roof while the reception will be held down in the concrete courtyard.  How romantic!  The gang starts singing about the "Wedding Day," signifying that this episode is going to be a musical.


Because preparing for a wedding isn't nearly as exciting as the wedding itself, lets quickly get through the rest of the day:

- Elmo, Herry, and Telly argue about which of them has the most important role at the wedding.

The answer is Maria.

- Big Bird worries about not being able to sit next to both Gina and Snuffy at the party. 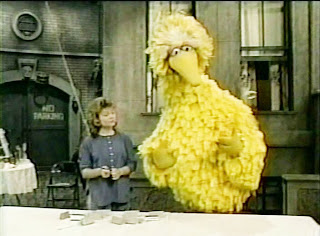 Don't worry.  They sing about it. 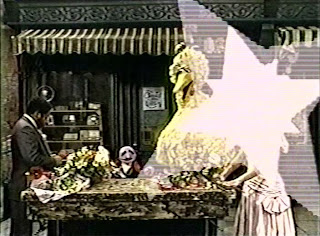 - And Maria and Luis sing to their mirrors while getting dressed. 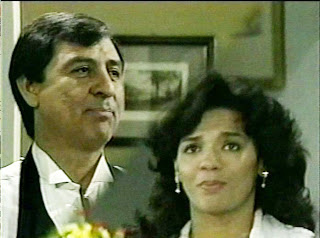 It is now time for the wedding and it is truly something to behold.  As you watch, remember that this is all occurring on a children's show.

First, the minister explains, in the simplest of terms, what a wedding and marriage is.  This is for the benefit of the children watching at home, but it is actually a very good speech.  Sometimes, when we look at things plainly, we can see how important they really are.  He explains why everyone has been brought to celebrate the joining of these two people, and what promises they are making to one another.  And then, in the middle of his beautiful speech, everyone enters a thought explosion!

This is the moment I did not expect when I heard the words "Sesame Street wedding."  I pictured a very nice, quiet ceremony, with perhaps a few jokes here and there.  But, no, we aren't getting let off that easy.  We are going to now hear the internal fears of everybody.  And I mean everybody! 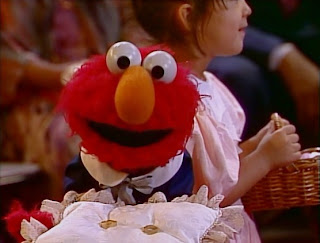 - Maria is suffering from an extreme case of cold feet.  She is prepared to leap off the building, if it weren't five stories high.  All day long, we have watched her excitement build, but we had seen moments where it seemed as if she would crack.

- Elmo is terrified of dropping the rings and ruining the wedding, feeling as if it was a lot of pressure to put a 3-year-old monster in charge of a huge task.

- Linda and Bob each wonder if the other wants to get married, but neither of them have the nerve to take that chance.

- Gina (still in high school at this point) just wants to fall in love someday.

- Maria's mother realizes her daughter is growing up and wishes her father could have been alive to see her wedding.

- Tio José is reminded of his long-gone youth when looking at Luis.

- David is coming to terms with the fact that Maria, the woman he used to date, is marrying someone else and will be another man's wife.

- Just when Maria gathers her strength, Luis starts getting the same concerns and thinks the whole marriage is a mistake.

- And Oscar wishes the obnoxious organ music would come back. 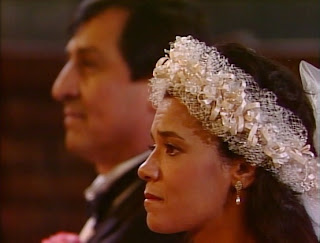 Is this love or is this terror?

Those...are very complicated emotions to be dealing with in a kids show.  But that's what weddings do.  For an extended period of time, people are left to their own thoughts.  The grand display of a commitment to love cause everyone to question their own role, their own past or future, and their own resolve.  Weddings are supposed to be wonderful, but during that brief moment, everyone is at their most nervous and the tension is unbearable.

Surprisingly, we don't check in with Big Bird, but I believe he's probably in a state similar to this:

Fortunately, that building is five stories high and no one will be running away today.  Luis and Maria exchange rings and the rest of the episode just observes their festivities.  No more jokes.  No more songs.  Just wedding cake and bouquet-tossing and dancing. 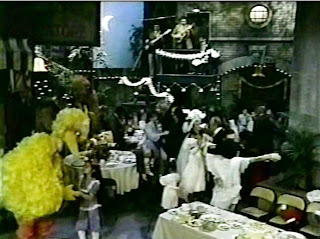 And the wedding band doesn't play "YMCA."  Things are good.

As everyone would expect, a wedding on Sesame Street runs smoothly and without issue.  Nearly every other television show wedding has some conflict, some drama, some calamity to keep things interesting.  But this being the first presentation of a wedding that most kids were going to see, Luis and Maria's wedding set the bar that all weddings should hope to live up to.  All the drama remains internal, allowing reality to enter for a brief moment.   It shows that these are all adults who understand their choices in life.  This was a nice wedding that would lead to a perfect marriage.  All things considered, sometimes it's better when a wedding can just be a good thing. 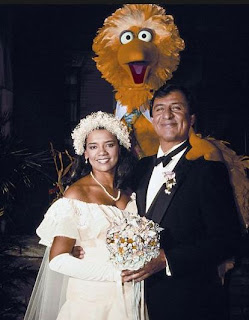