Annie Sue: The Other Boleyn Gilt

When we think of the original Muppeteers, we think of five men.  Jim Henson, Frank Oz, Dave Golez, Richard Hunt, and Jerry Nelson.  These are the men who played the most well-known Muppets from The Muppet Show and related media.  But the Muppet cast is widely diverse and I wanted to take some time to focus on the unsung ladies.  These women were just as important to the cast as the men, and I have selected five to look at this week, each with their signature Muppet character.  These female characters proved to be strong role models and have earned their place in Muppet history among the guys.

First up is a young, female pig who had dreams of being a star and was romantically drawn towards Kermit the Frog.  I speak, of course, of Annie Sue. 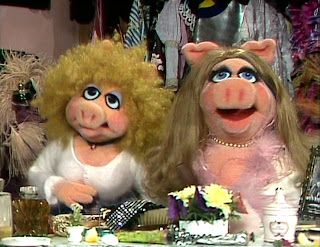 Why? Who were you thinking of?

Annie Sue was created as a foil to the loud, obnoxious Miss Piggy.  Taking one of the female pig puppets that was used in background scenes, newcomer Louise Gold was allowed her very own character who was to join the main Muppet gang.  Like her performer, Annie Sue was new to show business and had a lot to learn, but she was eager and willing and her spirit shined through.  Louise believes she got the part because she was tall enough to perform with the other puppeteers, but her long career with the Muppet crew proves she also had what it took to be a Muppet. 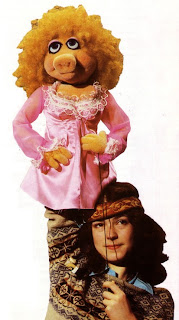 Louise was actually left-handed, making Annie Sue the first right-handed Muppet (the above image is flipped, so don't let that fool you).  She used her left hand to control the body and the right to control the rod to the right arm.  This is one of those tidbits that you don't really notice until someone mentions it and then all you can do from that point on is watch the arms of the Muppets. 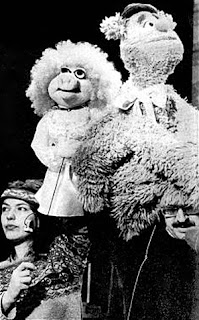 It's even more noticeable when you look beneath the bottom of the screen.

Annie Sue was formally introduced early in the third season, where Piggy instantly grew jealous of her youth and uniqueness.  In fact, watch Annie Sue's first number, and you'll notice something out of the ordinary. 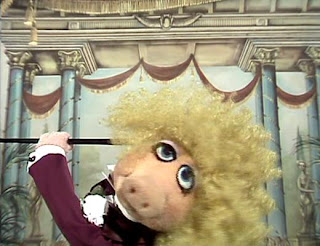 Case in point, Miss Piggy's recitation of "The Daffodils" is up next and she cannot get through the piece without the whole show caving in on itself.  She sneezes, Rowlf sneezes, and the whole audience sneezes her off the stage. 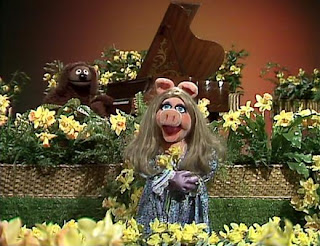 Allergies are the worst.

Annie Sue is so skilled that she even saves one of Fozzie Bear's disastrous talent acts, in which he attempts (and fails) to prove he has a photographic memory, and she twists the situation into a funny joke, making it seem as if the whole thing was planned. 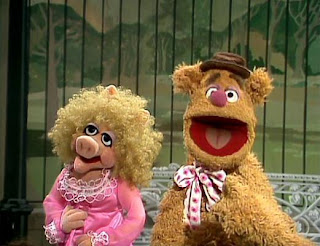 Wow, that is some pig.

So she can sing, dance, and tell jokes.  It isn't any wonder that Kermit finds himself preferring her over some other hotheaded hog. 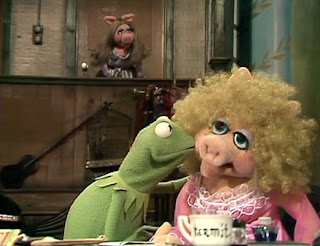 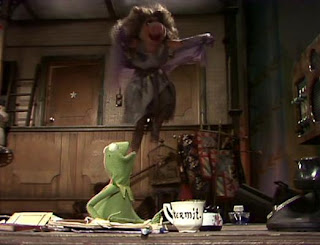 Annie Sue is the complete opposite of Miss Piggy.  So, you'd think that she would view Piggy as some sort of antagonist, right?  Nope!  Annie Sue's best quality is that she is completely humble and kind.  In fact, she idolizes Miss Piggy and the whole reason she entered showbiz was to emulate her hero.  You know, the hero she had ever since she was a baby? 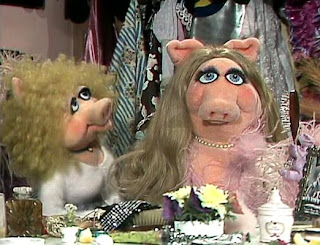 Annie Sue would appear throughout the third season, usually to provide an opportunity for Miss Piggy to make a fool of herself, but also to appear in her own musical numbers.  However, Annie Sue had a problem of being too perfect.  She would rarely be the focus of her own acts as a result.  For example, during a duet of "Daddy Won't You Buy Me a Bow-Wow" with Rowlf, Annie sings normally and Rowlf complains about the songs lyrics.  But he continues to play lest he get savagely beaten by Annie's guardian/boyfriend/bodygaurd. 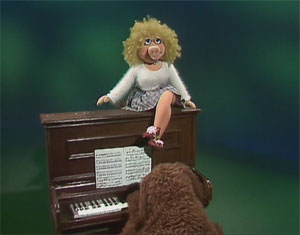 He's hiding behind the piano.

Annie Sue's role lessened from episode to episode.  She still remained in group numbers and sketches, but we never got to see more of her personality.  She never replaced Piggy, and Piggy seemed to have gotten over her jealousy of her.  The last big moment in Annie Sue's career was a sudden reappearance after a long hiatus in which guest star Roger Moore refuses Piggy's advances and instead chooses to date someone else. 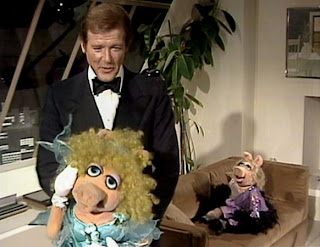 Louise Gold remained with the Muppets through Muppet Treasure Island and continued to voice assorted characters in various projects, including the title role in The Ghost of Faffner Hall.  But to her, Annie Sue will always have a strong place in her heart.  The two were exactly alike in personality and spirit.  They were sweet, charming, and exactly the kind of Muppet every other Muppet aspired to be. 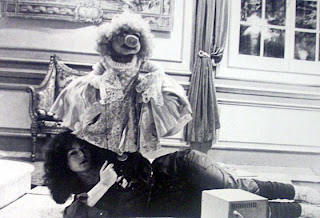 Dainty and witty.  A deadly combination.

Unfortunately, the Muppets are obsessed with the failures, the weirdos, and the screw-ups.  They needed us to feel sorry for them and to laugh at them.  If any Muppet had talent, they would no longer be on The Muppet Show.

Annie Sue was too perfect for this world. 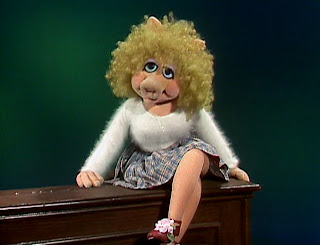 ...Plus, having two blond, female, porcine main characters would have been way too confusing.
Posted by John H. at 9:44 PM