Prairie Dawn: Why the Best Man for the Job is a Little Girl

A recent online article caused a big stir when it proposed the theory that each Muppet can be classified as either "Chaos" or "Order."  While I have a few issues with the simplistic view of these nuanced and complex characters, the most glaring flaw was the omission of the most "Orderly" Muppet in existence. You cannot talk about Order in the Muppet universe without mentioning Prairie Dawn. 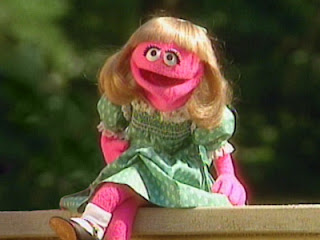 So innocent and sweet.  And she can crush you like a bug.

Prairie Dawn (not to be confused with that other small pink Sesame Street Muppet) is a force to be reckoned with.  Kermit is often the go to example of an "Order Muppet," but even he lets loose, has fun, and, most alarmingly, employs a cast of characters who cause destruction as soon as they step on stage.  The loose, anything-can happen atmosphere of The Muppet Show would not fly under Prairie Dawn's watch.  If things are out of Order, she sees to it that they are fixed immediately. 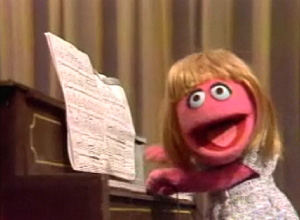 Hell hath no fury like a little girl scorned.

The seeds of desire for power were planted very early on when Prairie Dawn was placed in charge of the "Sesame Street Pageants."  These 5 minute educational skits were directed by Prairie and performed by her fellow castmates.  While she stayed on stage playing the piano and narrating, her friends would appear to portray the necessary items in the play.  However, Prairie often found herself reprimanding the cast for missed cues, forgotten lines, and breaking character.  She would trudge ahead, but her fellow performers could never stick to the scripts.


For years, Prairie suffered through these pageants, and she found herself always being the responsible one.  Being 7, she was older than most of the "child" Muppets, and her maturity allowed her to take charge in many situations.  Eventually, she worked her way up to directing movies, and it's clear she had picked up some techniques for handling morons, namely "assertive force."


Her quest for order became her driving passion, so, for comedy's sake, she was often paired with Cookie Monster, the most "Chaotic" Muppet on Sesame Street.  They began with simple tasks in which  cookies were often used as props, and she would try her best to keep Cookie from rushing ahead and spoiling the lesson.


Eventually, the two would cohost the "Letter of the Day" segments, and the lack of cookies caused Cookie's behavior to become even more erratic, constantly keeping Prairie on the verge of a mental breakdown.


Fran Brill (Prairie's puppeteer) said she most enjoyed the segments in which Prairie would get frustrated.  She began her stint at Sesame Street playing background roles and right arms to two-person puppets, and one day she was handed the tiniest puppet in the shop.  She began playing Prairie as a sweet, innocent girl, but soon realized she had dreams of grandeur.  But, unlike the other Muppet dreamers, Prairie wanted control.  She wanted to direct and manage.  According to her, if Prairie were given enough time, she would run the television network. 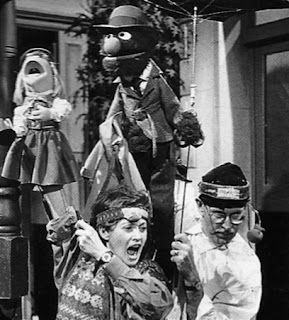 And she would rule it with an iron fist!

When given the choice between Scooter and Prairie Dawn as a stage manager, Brill picked Prairie without hesitation, because she knew Prairie would get the job done.  There is a reason that Prairie has lasted as long as she had, becoming one of Brill's two signature characters.  Prairie has the gall and determination that all people long to have.  She knows what she wants, and she gets it, even if she has to deal with all of the other regular folk in the world.  She is a natural born leader. 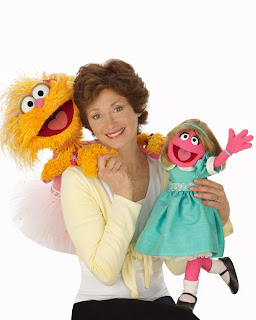 Don't let her looks deceive you.  She can be scarier than the monsters.

One last thing: Prairie Dawn has "Days of the Week" underwear.

There is no more argument.  Compared to Prairie, everyone is a Chaos Muppet.
Posted by John H. at 5:48 PM