We're almost at the best part of the movie, so I hope you don't mind if I fast-forward a bit.  Because, in all of Sesame Street history, there is nothing quite like the "Bluebird of Happiness" scene. 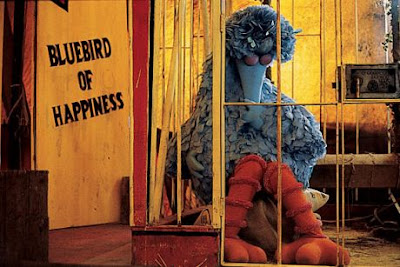 The rest of the movie can't compete with this image right here.

How does Big Bird get in this position?  Well...*takes a deep breath*...

Super Grover flies/crashes into Gordon's car thinking that it's Big Bird because it's big and yellow... 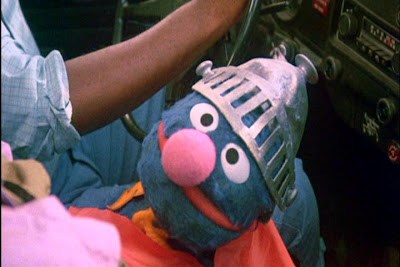 ...everyone ends up in the town of Toadstool where, since Bob, being the expert tracker he is, figured that's where Big Bird would end up and intersect with the paths of the cars (Don't ask me why they had to take separate cars if they were all going to the same place anyway, because I don't know.)... 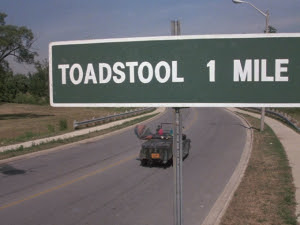 All roads lead to Toadstool.


...Big Bird ends up in the middle of the Toadstool annual parade and everyone sees him but the parade prevents anyone from getting close enough to catch him (And even if they did, only Miss Finch brought a car that could fit Big Bird. Everyone else's car is full of tag-along puppets that should have stayed home.)... 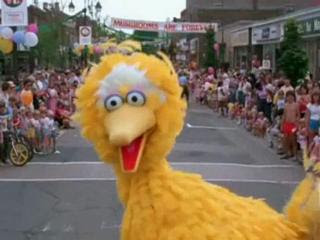 Why is there always a parade in these kind of movies?

...and to escape Miss Finch, Big Bird hides in the "hiding cage" of a pair of helpful strangers. 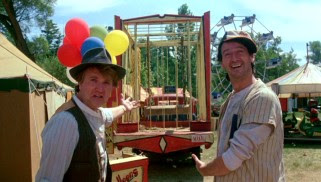 Now that the Sleaze Brothers have finally caught Big Bird, they realize that everyone will become suspicious when they showcase the giant yellow bird that everyone is looking for.  So, they do the only sensible thing and paint him blue. 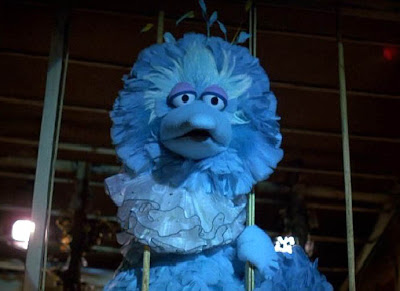 This is heartbreaking to watch.

They dub him the "Bluebird of Happiness" and present him to the giant crowd of children waiting to see the rare creature.  For the "show," he is supposed to sing for the kids.  So he sings "I'm So Blue," and it is the saddest song ever featured in a Muppet movie.


In every journey story, the hero has his "I want to go back" moment.  Big Bird sings his melancholy tune as he tries to remain optimistic.  But he knows that he is trapped and escape is utterly hopeless.  He  remains on the verge of tears with each line he sings, as the audience of kids stare in bewilderment.  And these aren't just actors.  These are all extra kids called in to see Big Bird in his brand new movie and he has hit rock bottom.  I have no idea what could possibly be going through their mind or how many had to be reassured after filming that everything is alright and make-believe.

Seriously, the song's ironic take on chasing your dreams is the last thing anyone would expect to see in a Muppet film.  The lyrics are basically the antithesis of "The Rainbow Connection."  Take a look:

In a different context, this could be uplifting.  It could be just what Big Bird needs to pull himself up and get ready to take on the world.  But the world has finally beaten him down.  He has given up.  He has been changed for good.

Tomorrow, we finish the movie on a lighter note as a rescue mission is under way!  So, cheer up!
Posted by John H. at 11:00 PM