Every generation has their own canonical version of the events on Sesame Street.  Big Bird has been 6 years old for over 40 years, so clearly continuity is not an issue for the series.  He re-learns the alphabet repeatedly without ever getting tired of it.  The inserts placed between "street scenes" are also continuously repeated, so at least sketches from the early days can outlive their era.  But the "street scene" stories are products of their time, and almost never repeated.  Although the puppets can remain the same age, the human co-stars must grow up around them.  It would confuse the child audience if the human's ages changed radically from episode to episode.  So we end up with a situation like kids who don't know who Mr. Hooper is, even though Hooper's Store remains.

Because little children accept everything in their world as fact, they don't stop to consider the history behind what they see everyday.  To them, the internet always existed, music was always downloadable, and Luis and Maria were always a happily, married couple on Sesame Street.  But the story of Maria and Luis's initial romance spanned a couple of seasons and, since they'll never be repeated on television, I felt it was worth looking at the origin of one of the most stable, loving families on television.

Despite both joining the cast in 1971, a romance between the two wasn't even considered as a possibility until 1987, 16 years later.  The idea came from Sonia Manzano (Maria) who became pregnant with her first child and realized that she wanted her character on the show to undergo the same life development, since it would be a great way to explain new babies and pregnancy to kids.  Pregnancy had been dealt with as a topic before, but never with a major character like this.  Gordon and Susan had adopted their child the year before, so there weren't any pregnancy related storylines.  Maria's new baby would be the next major development.  However, the show wasn't prepared for Maria to just become a mother out of wedlock.  The show broke boundaries, but they weren't that bold.

Maria would have to be married.  During the '70s, Maria dated the character David (Northern Calloway). But when it came time to discuss a possible father for Maria's child, Calloway's offstage behavior and mental illness eliminated his character as an option.  His character eventually left the following year, and Calloway died in 1990 (which is a tragic story for another day).  Luis, however, was single.  The two had already established a bond by working in the Fix-It Shop together, and the writers felt it would be great to have a well-represented Latino family on their show to serve as a role model.

The next two seasons were devoted to getting that baby.  And of course, before we get to marriage and a baby carriage, we must start with love. 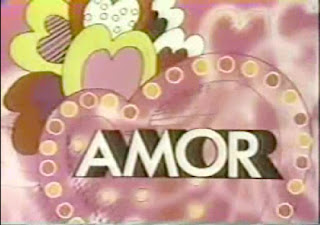 The episode starts off with an innocent game of "Cowboys," as Big Bird and Snuffy chase each other around, shouting "Yee-haw!" And, like all cowboys, they get into an argument about how many times one is supposed to say "Yee-haw!"  Big Bird says two, Snuffy says three, but it doesn't matter because we are going to hear it a million times anyway. 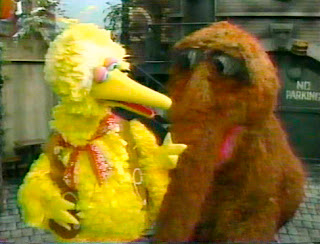 There is more to being a cowboy than just being annoying, you know.

This conflict serves to introduce us to the idea that people can still love one another, even if they don't share the same views or do the same things.  As Big Bird relates his problem to Gordon and Susan, they tell him that it's fine for Snuffy to say it three times, even if it is obnoxious.  Also, little Miles refuses to repeat his one line of dialogue when it gets interrupted, insisting that he already said it, making this a unbearably awkward/great moment. 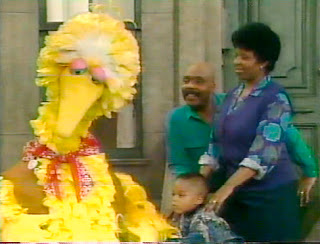 This represents how love can be unbearably awkward/great at times. 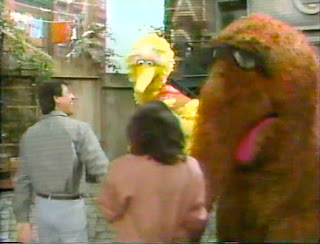 "That's the weirdest thing I've seen all day!" said the giant bird to the droopy mammoth.

Before they can explain themselves, Luis and Maria get all giggly and tongue-tied when making lunch plans.  This would make sense if they were in middle school, but they are middle-aged adults who have known each other for 16 years.  Do people this age still get twitterpated? 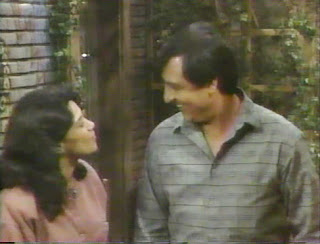 Awwwwwww!  They might be suffering from simultaneous head trauma!

Without dropping character, Big Bird decides that like the good cowboy detective he is, he should solve this hand-holding mystery before the bandits get a hold of his livestock or something.  He and Snuffy split up, to try the old "detectives split up" approach, made famous in that detective movie, Detectives Split Up. 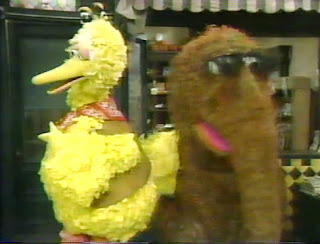 With BB and AS on the case, no hand will have to fear being held ever again!

Big Bird and Snuffy lay down their Spanish Inquisition and grill Maria and Luis about the rules of hand holding, until they both realize that it must be true, they are in love with each other.  And whoever made the screencaps of their "moments of realization" have perfectly captured the awkwardness that is admitting you are in love with someone. 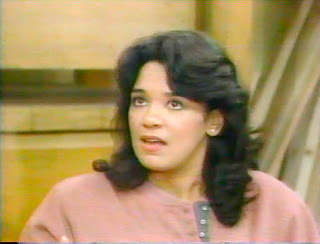 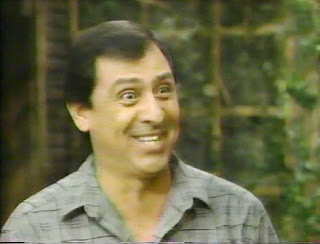 Haha, I could look at those all day.  Anyway, both Fix-Iters rush into each others arms to tell the other what they have been waiting 45 minutes to say.  They allow themselves some privacy in the Fix-It Shop, which sets off Sesame Street's Silent Alarm of Romance, apparently. 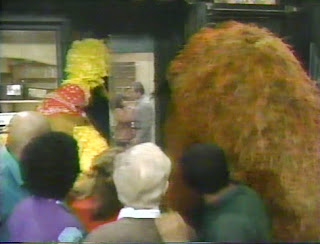 You were right, Bob.  This alarm really pays for itself.

And, after they admit their everlasting love to one another, the two share the steamiest kiss ever seen in daytime children's programming, officially cementing the fact that Sesame Street is the world's best soap opera. 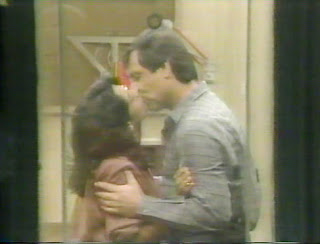 Mister Rogers, eat your heart out!

To celebrate the new love, jazzy Hoots the Owl and the Oinker Sisters treat us to the song "The Like Changed Into Love," which is exactly as amazing as that sentence entails.

That night, as Luis and Maria put Big Bird to bed, he asks them if they'll get married.  While they obviously haven't thought that far ahead yet, Big Bird bets that they will.  I think that's a pretty safe bet. 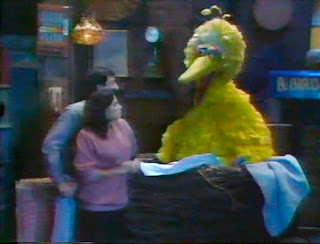 Cowboy-Detective Big Bird is the master of intuition.

And thus ends the first chapter of the Street's greatest love story.  In the following days, this couple's relationship will become everybody's business.  A romance will unfold with a Sesame Street twist, ensuring that intrusive birds and uncaring grouches will be there every step of the way.  The relationship will have its ups and downs, and it will all be out in the open for the whole neighborhood to see.  Because when you fall in love on Sesame Street, you know it's going to be unforgettable. 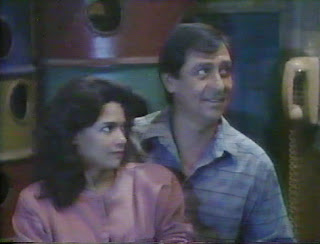