After reading Big Bird's depressing letter, Snuffy decides now is the time to visit his friend and lift hist spirits.  He sends a massive postcard detailing his plans and Big Bird is overjoyed.  He shares the news with his family, but hits a roadblock when they inquire about the type of bird Snuffy is.  When Big Bird tells them the truth, they forbid Snuffy from visiting, because birds are only supposed to be friends with birds.

So, Big Bird does what anyone would do in this situation and runs away in the middle of the night. 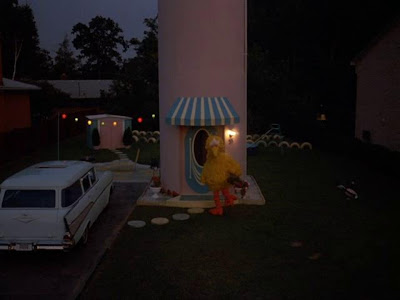 I'm sure he'll be just fine.


Soon, the news of Big Bird's disappearance hits the airwaves and that means it's time for our first celebrity cameo! Chevy Chase appears as the anchorman and, like Steve Martin and John Cleese before him, he makes the most of his one scene. 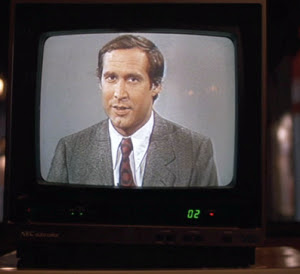 Never before has saying the name "Sesame Street" been so funny.

As the Sesame Street inhabitants watch, the report is turned over to our favorite reporter Kermit the Frog who explains that Big Bird has run away and intends to head back home. 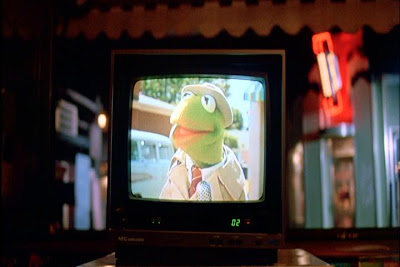 I'm not sure if this counts as a cameo or not.

He interviews the Dodo family who are completely distraught over the loss of their new child. Wait, I meant they are completely excited to be on television and they leave the interview in order to watch themselves on TV. Yeah, we aren't supposed to care for these characters one bit. 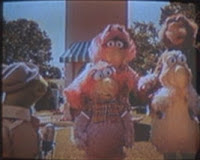 The hatred of birds among children ages 3-7 increased 500% after this movie premiered.

Kermit then interviews Miss Finch who swears to hunt down Big Bird and kill him, I mean, return him to his "proper" family if it's the last thing she does. Big Bird watches her threat on a store's television set and psychs himself up for his "three-hour" journey (because it took two hours to fly there, and he knows walking will take longer, obviously). 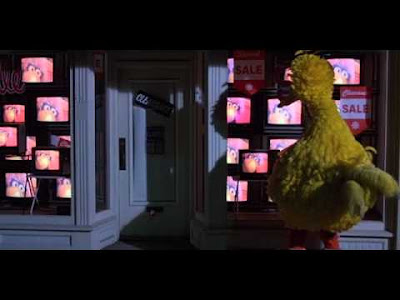 I miss the days when all store windows had multiple TV sets showing plot-relevant news stories.

The gang on Sesame Street decide that the best course of action will be to split up and drive across the country in order to intercept Big Bird's path. Akin to It's a Mad, Mad, Mad, Mad World, we get five wacky modes of transportation to follow:

1) Gordon, Olivia, Linda, and Cookie Monster are taking Gordon's VW, because it's smart to bring a monster that devours everything in sight on a rescue mission.

2) The Count heads off in his Countmobile alone, probably because no one wants to be stuck on a 24-hour car ride with the Count. 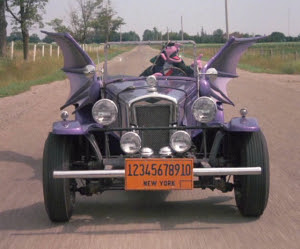 That's one! One person counting out loud the entire time! Ah-ah-ah!


3) Super Grover is going to fly by himself. Um, we don't want to end up with two missing Muppets, Mr. Movie!

4) Bert and Ernie take their biplane that they always have that Ernie knows how to fly like always.

5) And Maria and Telly Monster join Oscar in his Sloppy Jalopy, which comes with Homer the Honker, since the car's horn doesn't work. Oscar's only agreeing to help because he's sure they will end up coming home empty handed. Does that mean he thinks Big Bird is going to get killed? Probably. 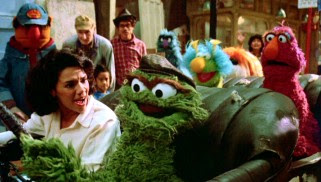 This is the cool car, by the way.  Shotgun!

As the gang fans out, Big Bird continues teaching all sorts of great lessons to the viewing audience, like it's a good idea to hitchhike with random turkey farmers because they'll probably turn out to be kindly country music sensation Waylon Jennings. And he'll sing you a nice tune encouraging you to stick to your decision to run away from your home. 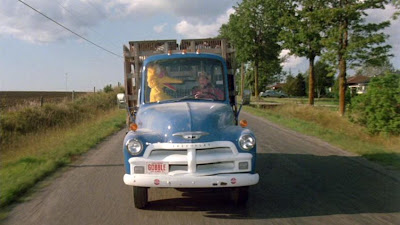 "Ain't No Road Too Long" is this film's "Movin' Right Along."


But lurking on the sidelines is a pair of ne'er-do-well brothers named Sam and Sid Sleaze who run a shoddy carnival that swindles kids out of their well earned nickels.  Played by Joe Flaherty and Dave Thomas of SCTV, the Sleazes get an idea as to how to increase revenue at their crappy park.  They need to get their hands on that missing bird and make him their main attraction! 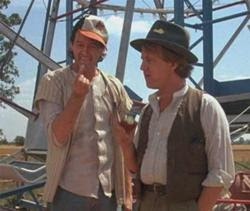 Now these guys are just what Sesame Street villains would be like: pure evil without any sense of realism.

Uh-oh!  Hopefully Big Bird will manage to stay far away from these two.  Tune in tomorrow to see if he does!  (Spoiler alert: he doesn't.)
Posted by John H. at 11:40 PM