Love in the Fix-It Shop, Part 5: A Baby Makes Everyone Happy

At some point during the 20th season, Maria became pregnant.  It's unclear when she discovered this, though, because the earliest known episode to feature a reference to her pregnancy occurs 2 months before the baby is born (which seems a little late, until you consider every episode of I Didn't Know I Was Pregnant). 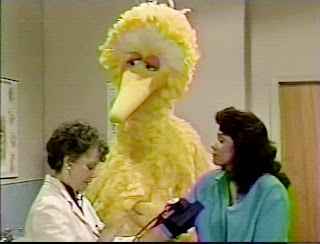 While the birth of a child is a significant event in anyone's life, the story of Maria and Luis's new baby doesn't really focus on them.  Obviously they are important to the story, as they go into full-on panic mode when the baby starts to come.  But, being a children's show means that there is only so much that can be shown and discussed before getting too...medical.  What follows is an exercise in shielding the painful realities of childbirth from a viewing audience under the age of 6. 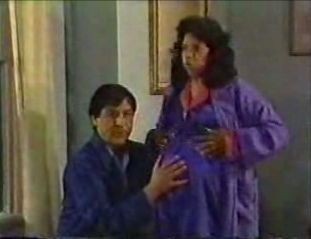 The baby is ready to come out now.  Don't ask us how it works.

By using vague language, the episode only conveys the idea that a birth requires a trip to the hospital as soon as possible.  Maria, despite her state, remains very calm compared to the other adults running around like goons.  But since we aren't going to be able to follow her into the delivery room, the story actually becomes about Oscar the Grouch. 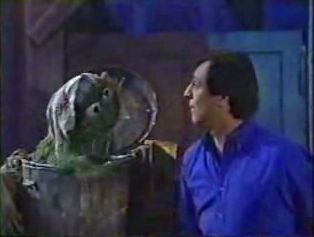 A baby is going to be born soon.  Let's get the rude monster who lives in the filthy trash can!

You see, Susan and Gordon's car has been parked illegally and was towed away during the night.  Of all the nights to park illegally, this has got to be the worst.  Because it is so late at night/early in the morning, no cabs are running either.  Attempts are made to call the cab company.  No one thinks to call 911.  But everyone remains panicky and loud, right outside of Oscar's trash can.  He doesn't care about their problems!  He just wants to sleep!

Big Bird overhears the commotion and helps Maria with her Lamaze breathing, teaching a valuable lesson to children at home who ever find themselves in charge of delivering a child. 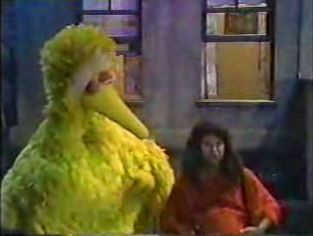 Leave it to Big Bird to keep everybody calm.

With no cars coming and the contractions getting closer together, Oscar finally steps in to drive Maria and Luis to the hospital, just to get everybody to shut up. 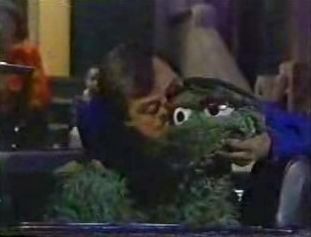 Our hero, ladies and gentlemen!

The trio drives off to the hospital as the sun rises, while everyone else stays behind, too excited to go back to sleep.  During the next day, Big Bird tells all of the other neighbors that Maria went to the hospital and that they should wait for Luis's phone call at Hooper's Store to hear about the status of the baby.  At the hospital, Luis runs in and out of the delivery room, and tells Oscar to call home.  We are then treated to a lengthy game of phone tag as the neighbors keep missing the phone calls. 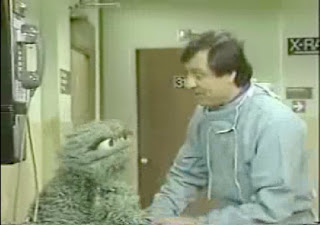 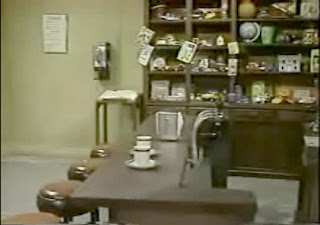 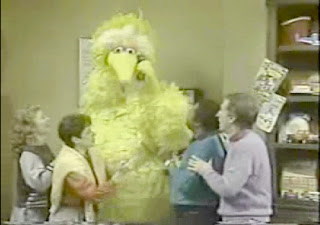 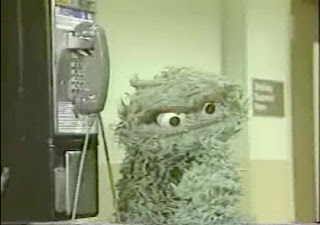 If only cell phones could be invented soon.

Oscar gets so caught up in the excitement that he agrees to stay by the phone, until he realizes that he's a Grouch and he should be acting so happy and anxious.  The birth of this baby is messing with his head, and he doesn't know what to believe any more.  Luis tells him that the feeling is normal and it "happens to the best of us," but Oscar continues to freak out. 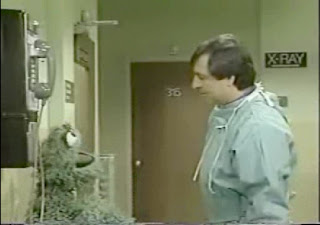 Finally, Oscar feels that he has had enough and he abandons Luis at the hospital, in the hopes of retaining his Grouchhood.  He returns home, and everyone swarms him, expecting him to have news about the baby.  When he refuses to interact with them, everyone gets very upset with him, calling his behavior the "grouchiest thing [he] has ever done."  Oscar is known for being a Grouch and we all love him for it, but this behavior was truly despicable, and the men nearly beat him up for it. 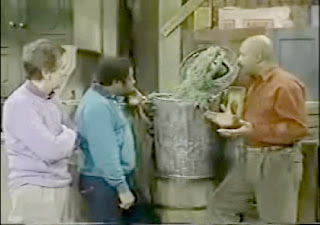 Before Oscar could be turned into a pile of shredded felt, the gang suggests that they just go to the hospital themselves, rather than wait by the phone.  How they all got there is never really explained, considering the transportation fiasco from earlier in the morning, but, it doesn't matter, they all arrive to see the new baby. 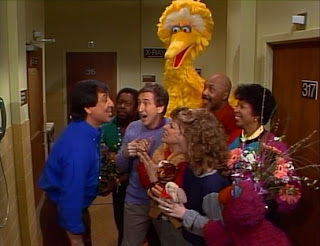 Luis greets them and welcomes them into the maternity ward to see a very happy Maria.  The baby isn't present yet, and Big Bird starts poking around, sticking his head under the sheets to see where the baby is.  But finally, the newborn Gabriella is brought into the room and all is good. 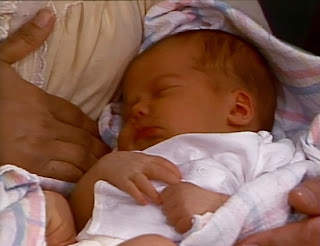 Big Bird welcomes the baby to Sesame Street and Maria and Luis began the next chapter of their lives. 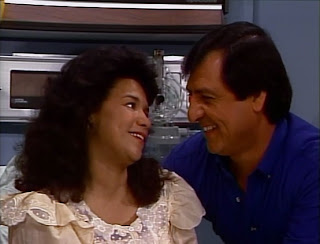 That night, everyone goes back home as does Luis, who stops by Oscar's trash can to tell him the good news.  Oscar shoos him aways, but then calls Maria at the hospital, just to hear how the baby is doing and he talks long into the night. 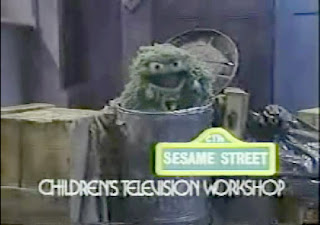 See? The baby has changed him for the better.

Thus ends the Maria/Luis 2-year romance storyline, but their story is not over.  They would grow to become the most caring and stable family on daytime television and they inspired a nation of children to seek love in their lives and care about their families.  Their mutual adoration changed the attitudes of everyone on the street and brought much joy to the neighborhood.