Red Fraggle: I Want to Be the Very Best

It takes a special kind of person to work with the Muppets.  They must not only be one with their puppets, but one with their own emotions as well.  When actors portray characters, they are often tapping into an element of themselves that is true.  The puppeteers must pass this internalization of a character onto an inanimate object and make it just as believable as if they were performing the part by themselves.  Rarely does the audience decide who someone's signature Muppet is.  The connection between the special Muppet and the puppeteer is born from within, and once the connection is made, it is impossible to see anyone else in that role.

Karen Prell's signature Muppet is Red Fraggle and this pairing was not a coincidence. 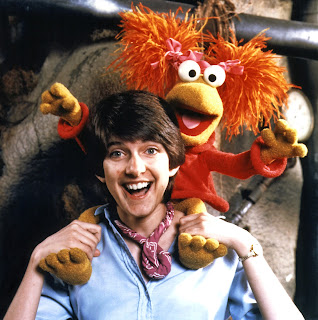 In 1979, Karen was a huge fan of the Muppets, and she had begun crafting her own puppets in a similar vein.  She boldly reached out to Jim Henson directly, vying for a spot on his team, and showcasing the puppets she created which were clearly based on his own, one even being a modified Grover puppet. 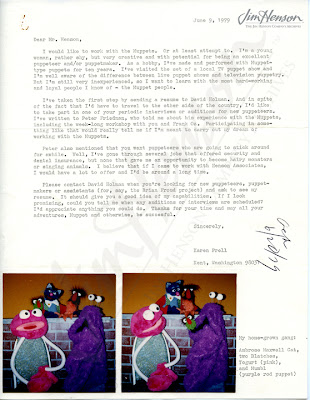 Henson liked her style and soon she was doing bit parts on The Muppet Show and Sesame Street, and she assisted in his Creature Shop movies as well.  When Fraggle Rock was being developed, Karen knew that she wanted to be the artsy, thoughtful Mokey Fraggle, but after her audition, Henson cast her as Red Fraggle instead.  The athletic, competitive, energetic Fraggle was not who Karen had in mind as her best character, and was disappointed, struggling to connect.  But she was later quoted as saying that Henson could see through to the real her, and knew she would be perfect for the role. 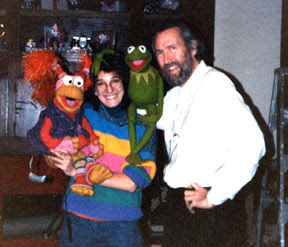 On the set of "A Muppet Family Christmas."   Karen and Red are part of the family.

Karen herself didn't make the connection until the episode "I Want to Be You."  During this episode, Red grows jealous of Mokey when Gobo implies that he'd rather hang out with her, since she is quiet and not always asking him to do dangerous stunts like Red does.  Red laments that she wishes she could just be Mokey, instead of herself.  So, she decides to give herself a complete makeover, let her hair down, and act just like Mokey. 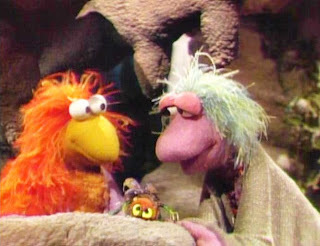 This was Karen's chance to basically perform Mokey for a day, changing her voice and performing style.  Unfortunately, Red fails at performing Mokey's talents and just ends up confusing her friends.  Ultimately, she finds herself in a situation in which her friends are about to be captured by the Gorg, and, using her assertive, boldness, she manages to distract the Gorg long enough for her friends to escape.  Mokey's meekness would have failed in this situation, and it was then that both Red and Karen understood who they were.

Red evolved to be the Fraggliest Fraggle of them all.  Her boundless energy made her a force to be reckoned with, and her competitive spirit became her signature quality.  This often put her at direct odds with Gobo, the genial leader of the group.  Gobo always remained level-headed, Wembley always followed along with whatever anyone said, Mokey was too introspective, and Boober was too worried all the time to be in control.  Red, however, always wanted to be in charge, and she gets her wish (sort of) in "Red's Club." 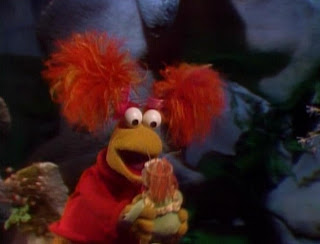 Pictured: All the members of Red's Club.

In her attempt to be the leader for once, she forms a club that has many rules for exclusion from the group.  Basically, anything Gobo wants to do is forbidden (especially reading postcards from Uncle Traveling Matt, which Red found to be the most boring part of each episode).  Since Gobo was nicer and less demanding, all the Fraggles end up staying in his club, leaving Red all alone (save for a Doozer, who eventually quits).  Red learns a lesson innot always having to be the center of attention, and that cooperating with others is beneficial to all involved.

There is one more episode that is important to understanding Red's character: "Playing Till It Hurts."  This episode was based on a story idea pitched by Karen Prell herself, when a Wembley episode fell through at the last minute.  By now, Karen understood her character so well that she knew the perfect conflict for Red to encounter: her own determination.

As mentioned before, Red was the athlete of the group.  Her favorite sport was the game "Rock Hockey," which seemed like a cross-between hockey, rocks, and Quidditch. 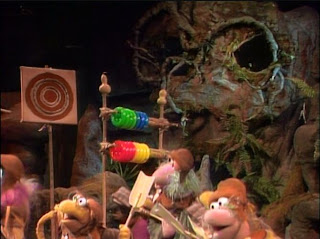 Her idol Rock Hockey Hannah had heard of Red's prowess on the field and was planning a visit to watch her play.  Red, unfortunately, injures her leg during practice and is placed on bed rest during the big game.  Despite doctor's orders, she sneaks into the game posing as the goalie (which isn't even her position) and, combined with her crippling injury, performs very badly.  Eventually, Red reveals herself, claiming that she just wanted to impress Rock Hockey Hannah, and her idol informs her that a true athlete knows when to quit. 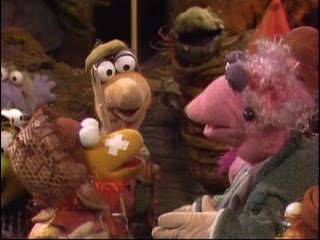 This is just a terrible day.

When we look at these three episodes side by side, we can see a pattern of staying true to yourself, but not going overboard.  Red is an independent spirit, which defines her.  But in each case, she takes her good qualities to such an extreme that it ends up working against her favor.  Red's sole purpose in these series seems to be to inform children to be comfortable with who they are. 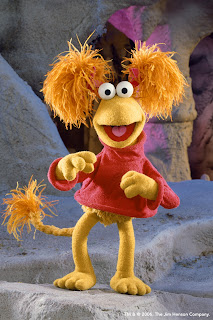 Even if they are loud and rambunctious.

Karen eventually left the Muppets to work with Pixar where she continued to do great work.  However, in recent years, she has returned to the Muppets, appearing at many events in character as Red. 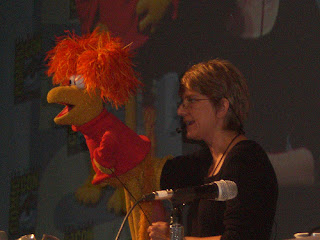 Usually she appears alone, which indicates that this is truly a labor of love.  These aren't just big Muppet gatherings.  She is looking for any chance to keep Red alive.  And that is exactly the kind of Fraggle Red is.  She won't stay down.  She will remain the center of attention as long as she has to, because she is full of self-worth.  This all coming from the woman who thought Red wasn't a right fit for her. 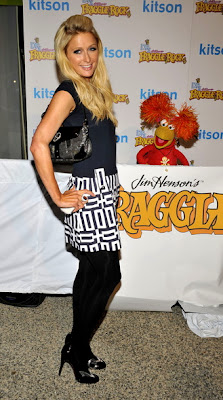 Paris Hilton and Red Fraggle.  This sight made possible by Ms. Prell.

With upcoming Fraggle Rock projects in the works, you can be certain that Karen Prell is the most excited out of all of us.  Red will have the chance to reach a new generation of kids, and we will all be the better for it.