If Music Be the Love of Food, Play On

In the film Who Framed Roger Rabbit, we are treated to a world where the world of cartoons and reality are intertwined.  The laws of physics do not apply in Toontown and the impossible becomes possible.  While the Disney theme parks try their best to recreate the world of cartoons, they will always be limited by the rules of logic.  The Muppets, however, are able to exist peacefully in that in-between state between fiction and non-fiction.  When we encounter them, we treat them as living creatures, willingly suspending all rationale.  But, like cartoons, they can endure great physical stresses that no human could survive.  Objects that were once inanimate can start talking.  And, yes, the food can sing. 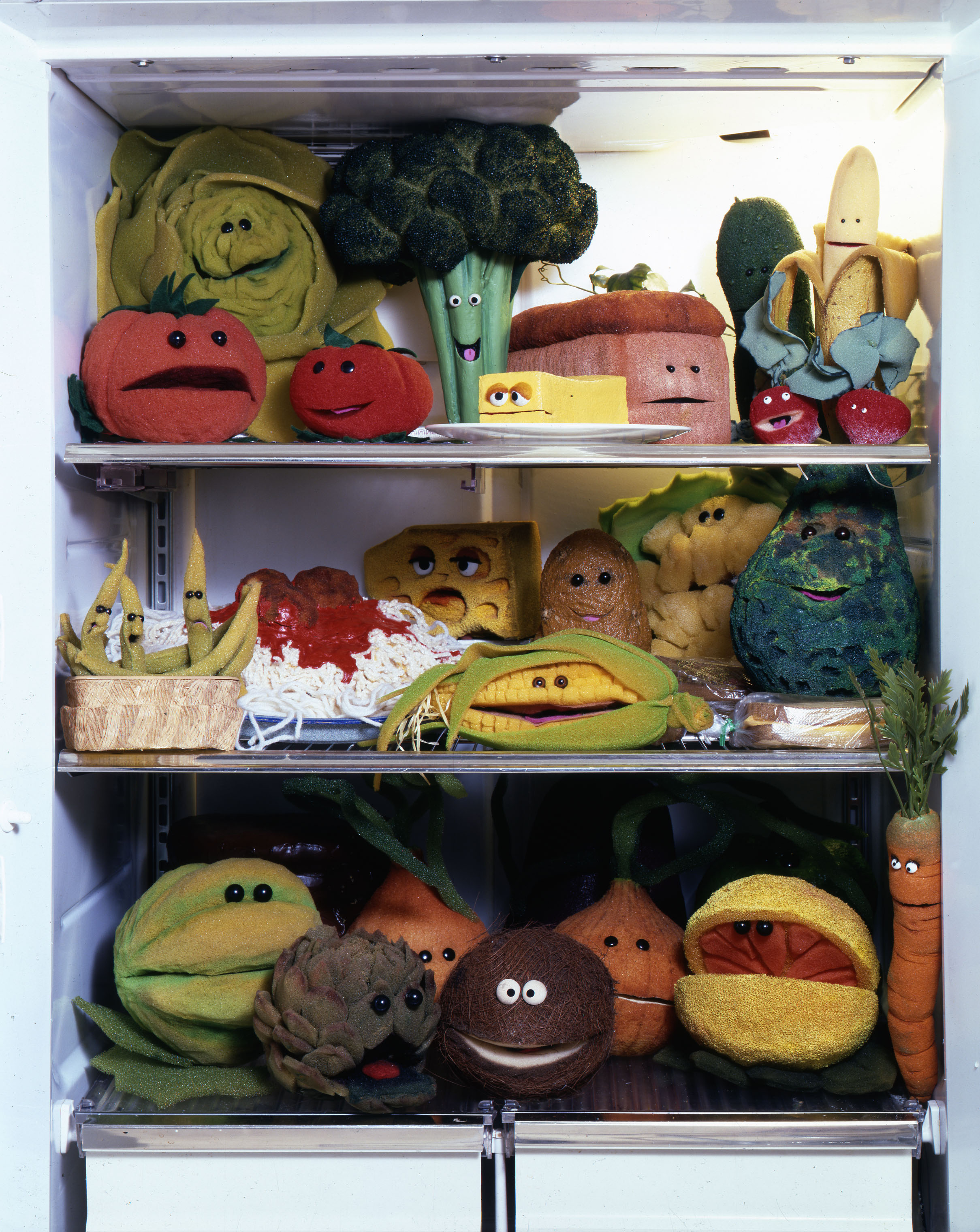 And you thought being a vegan was tough before...
The Singing Food is another one of those omnipresent aspects that let you know you have entered Muppet territory.  Unlike other Muppet species, the food comes in dozens of varieties and voices, yet they seem rather simple minded.  Perhaps because they are lower on the food chain (literally), they haven't quite developed as much as their puppet brethren.  While they lack intelligence, they can be trained to perform complex musical numbers, such as "Yes, We Have No Bananas."
And it is not only the abusive Muppet-tamer Marvin Suggs who is able to get these fruits and vegetables to sing.  Even the Swedish Chef could train them to sing their signature hit in his native tongue, Fake Swedish.  Considering the battles the Chef often has with his meals, this is quite the accomplishment!
What causes these plants to mimic the behavior of other sentient beings?  They all seem to exhibit the exact same personality.  But even though they are simple minded, does that make it right to eat them?  I mean, Muppet Monsters eat living creatures whole every day.  Sure, these Muppets are enslaved to perform show tunes before becoming someone's dinner, but this is a cartoonish world!  We don't have to worry about the food, right?!  It's just harmless fun!

Did I mention that the Singing Food have offspring that hatch from eggs?
That's right.  That is a picture of newborn baby asparagus.  How adorably tragic.
But don't worry.  The Singing Food is rarely seen on somebody's plate.  Perhaps their abilities have allowed them to escape a grim demise.  They always seem to pop up in large chorus numbers, without anyone threatening their lives. 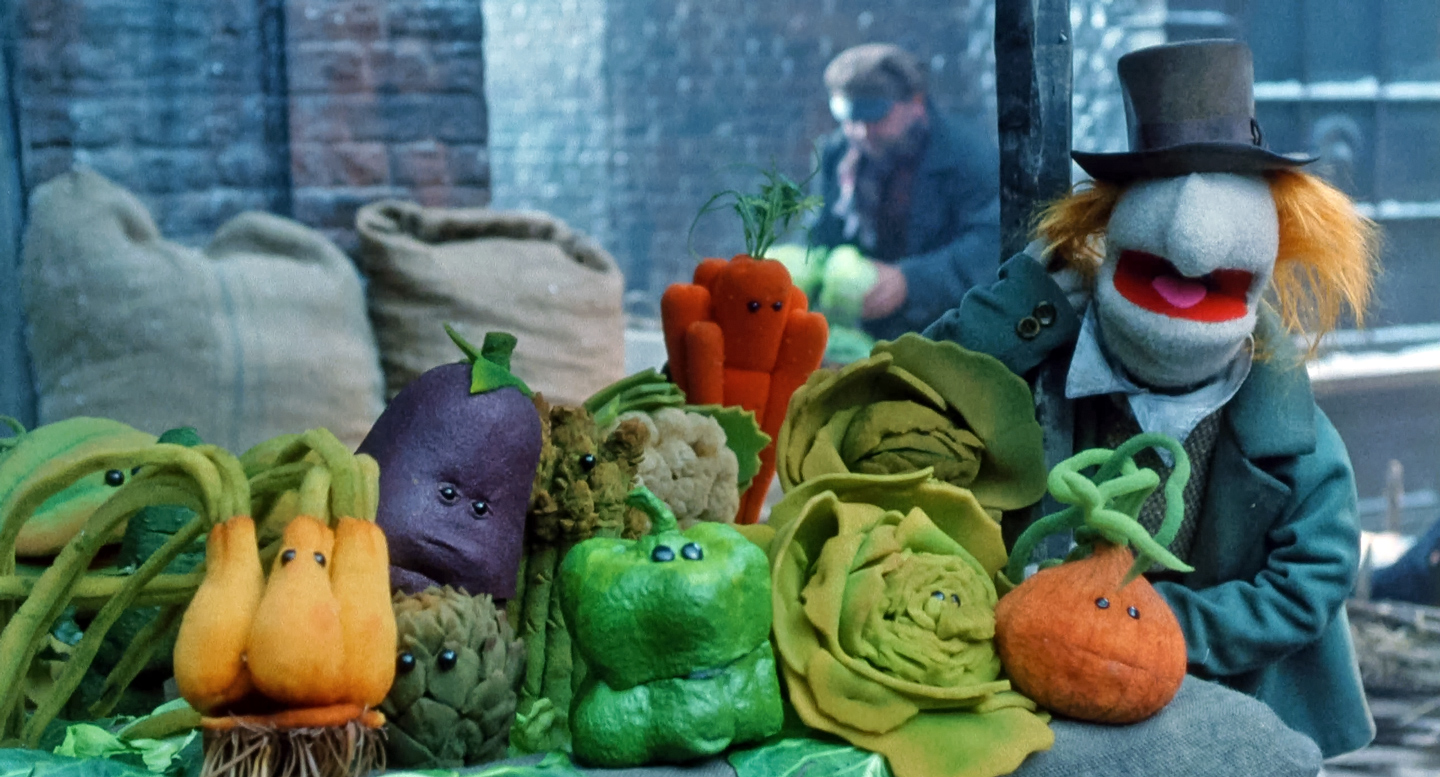 Vegetables are more likely to survive in groups.
The Singing Food have been spared from the fates of their non-verbal siblings.  At least, that was the case until the most recent film The Muppets in which !!!SPOILERS!!! their abandoned refrigerator is discovered and all the Food is revealed to have gone rotten.  So they are disposed of in a manner befitting to a Muppet, a fiery explosion. !!!END OF SPOILERS!!!
So, while a cartoon world may seem like a fun place to visit, be glad you live in a world where food cannot talk or sing or exhibit any signs of life once in your kitchen.  And should you happen to discover a musical fruit, please, let him toot his melody and continue on his merry way. 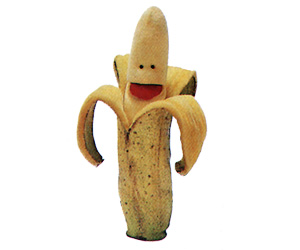 And be thankful we have bananas today.
Posted by John H. at 11:21 PM