Scientific Classification:
Animalia Mollusca Cephalopoda Teuthida Martianae Yippus Yippus﻿
Anatomy and Physiology:
﻿Similar to squids and octopuses, the Yip Yip Martians possess many tentacle-like appendages attached to heir bodies.  Unlike their genetic cousins, their mouths and eyes are located on the top of their bodies, along with antennae for additional sensory intake.
Their bottom jaw constitutes most of their phyiscal communication, using it to help them bob up and down (when pleased) or hide their faces (when scared).

The dominant colors of the species are pink and blue, although orange Martians have also been recorded.
Their movement is akin to a jellyfish floating in water, except they are able to replicate thes motions in the air, barely touching the ground.  They also are capable of transporting themselves through teleportation, but it has not yet been determined whether this is an evolutionary trait or a techonologically-assisted form of transport.
The Martians communicate in a tonuge similar to human speech, although grammar and syntax are not observed in their language.  Singular words and repetitions of the phrases "yip yip" and "uh huh" are the most common speech patterns used by these creatures.  They can mimic a variety of noises and are not just limited to a human vocabulary, much like a parrot.
The Martians interacting with a telephone.
Habitat:
While they are dubbed "Martians" by the general public, their true planet of origin remains a mystery.  Rare archival footage has been discovered in the wreckage of one of their spacecrafts which documents their arrival to Earth, confirming that they are not from this planet (although they were aware of it's existence before setting off on their journey).
Since coming to Earth, the Martians have remained nomadic, rarely staying in a single location long enough for researchers to gather much evidence from them.  Their ability to teleport at will has made anaylzing their lifestyles quite difficult.  Their diet, vital statistics and life-cycles still remain a mystery in the scientific community.

Yip Yip Martians tend to travel in pairs, as if constant validation of their ideas is necessary for their survival.  They approach the world with a limitless curiosity, not leaving a a new discovery behind until they have fully determined what they are encountering.  Even if it frightens them, they do not let fear of the unknown halt them in their quest for knowledge.


The first being the Martians encountered was a clock, which they mistook for a human.
The Yip Yips apprach every object and living being with the same level of scrutiny, using their powers of deduction to learn more about the planet Earth.  Humans have provided the most valuable material for the Martians, showcasing emotions that the Martians had never experienced before.  One of those powerful breakthroughs in the Martian community was the introduction of the concept of love.
﻿
Much as they compied sounds and speech, the Martians were able to incorporate emotions into their mental vocabulary.  They soon learned that emotions come with in a variety of flavors, and not all of them were pleasant to experience. 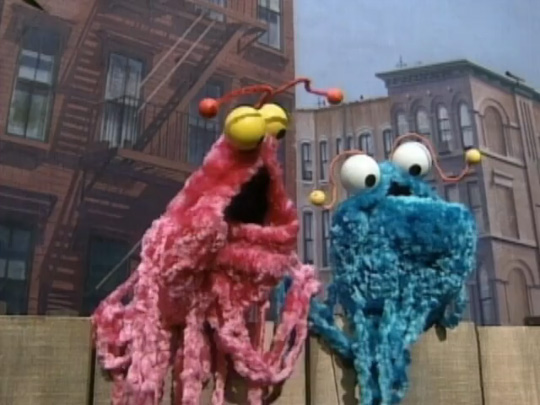 The Martians soon discovered the physical and mental pain that accompanies sadness.
The Martians have fortunately shown no hostility towards any of Earth's inhabitants.  They instead choose to remain hidden and out of the way, reveling in the wonders around them.  The presence of their alien guide book suggests that previous generations of Yip Yip Martians have visited our planet before and the ones we see today are merely tourists.  These space invaders pose no threat to us and should be welcomed, rather than feared.  They have learned so much about us, about our values and society, that it is clear they respect us and want to be included in our culture.  If you discover one, take the time to learn about them, before dismissing them as weird and strange individuals.
Perhaps one day we will discover a reliable way to communicate with them without alienating them.
Posted by John H. at 8:31 PM