The Host With the Least

After a couple of failed starts to create a Muppet television series, Henson finally decided to show what he was capable of with The Muppet Show: Sex and Violence.  If that title seems strange to you, then it's doing its job right.  Henson wanted to put his foot down and convince the networks that puppets are no longer kids' stuff.  This was no Sesame Street.  This was Muppets After Dark.

The title, however, was just a draw to get the audience hooked, as all excitement and potential was squandered after a promising opening bit thanks to the introduction of the host Nigel. Kermit, he is not.

There are quite a few similarities between this pilot and the eventual show, including the first appearances of many key players (such as Sam the Eagle, the Electric Mayhem, the Swedish Chef, Statler and Waldorf).  A couple of segments would later find a home on the regular show, including a sketch that would inspire "Pigs in Space."  But the feel of the show was very different from what was to come and Nigel is to blame.

The show is modeled after the fast-paced variety show Laugh-In where skits and one-liners come a mile-a-minute, never pausing to rest.  The scenes in this episode are very short, usually cutting away once the punchline is delivered, with longer sketches being broken up into multiple parts.  Yet, even with the speedy editing, the show seems to move at a snail's pace, thanks to Nigel.  Like Kermit, he is here to put on a show, but he lacks Kermit's enthusiasm and excitement.  He speaks with a monotone voice and seems bored at the prospect of hosting the show.  Whenever the camera cuts to the backstage shenanigans, he is in the middle of playing various board games with Sam and Floyd.

Unlike the show it would spawn, Sex and Violence does not feature a celebrity guest.  Instead, the plot revolves around the arrival of the Seven Deadly Sins for the finale.  Perhaps Nigel's blandness was supposed to stand in contrast to the Seven Sins' behavior, poking fun at the notion that the audience only wants to see sex and violence.  Whatever the case, the Sins are brilliantly designed characters and it is a shame we never saw these puppets again.

There are a couple of other great moments in the show that are not bogged down by Nigel's dry presence.  Cameos from Kermit, Rowlf the Dog, and Bert during the "At the Dance" segments are very welcome.  The "Theater of Things" spot using only pencils and a ruler had some great puns and would have been a great recurring segment on the series (using other items of course).  But the best moment would have to be the "For the Birds" sketch.

Music is noticeably absent from this show (save for some background music and the Electric Mayhem's number) so many of the typical Muppet skits fall flat.  But "For the Birds" makes the use of its lack of songs by allowing the entire cast to show how clever and lyrical the use of simple dialogue can be.  Each bird has a different "cry" that sounds like a common phrase which is then repeated throughout the scene.  The story is played out through the use of varying inflections, creating a brilliant moment amidst the slow chaos of the surrounding show.  Surprisingly, this segment was never repeated, although the birds would reappear from time to time when birds were needed.  It wasn't until the recent Muppet Show comic book's adaptation of Peter Pan where the birds could once again reference this lost sketch in its full glory.

It was moments like this that allowed the producer Lord Lew Grade to make the decision to put The Muppet Show on the air, which allowed for many improvements in quality.  The old hecklers were no longer confined to their living room, creativity was allowed to flow, and Nigel was replaced with the far more charismatic Kermit.  But don't worry about Nigel, he got a new job as the conductor of the Muppet Orchestra for the entire series.  He may not have become a star, but at least he was able to bring music to the show.  Not every Muppet is memorable, but each one is essential. 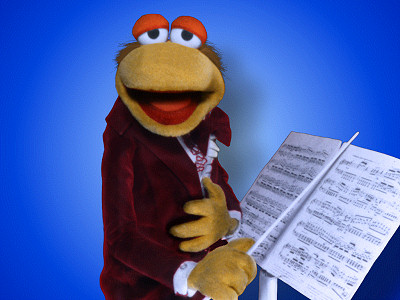 For without him, there would be no one to conduct the Muppet Show Theme Song!
Posted by John H. at 11:16 PM

Email ThisBlogThis!Share to TwitterShare to FacebookShare to Pinterest
Labels: for the birds, jim henson, nigel, pilot, the muppet show