A variety show is, by definition, supposed to contain a variety of acts.  Nowadays, the only "variety" show on network television is Saturday Night Live, which is really a comedy sketch show with one or two musical moments thrown in for balance.  Even late-night talk shows tend to be mostly comedic.  We have come to accept comedy as being a necessary staple of variety.

But the variety shows of the past could also be serious.  Variety could easily include a thoughtful artistic performance, without the need for humor.  The Muppet Show always tried to incorporate moments like this during their episodes.  Sometimes it would be a solemn song by Robin the Frog, or the one-on-one chat between a Muppet and the guest.  Comedy was there, but not always utilized.  Mostly, it came down to the guest star of the day.

The Muppet crew had built a familiar routine when working with guests on the show.  The writers would usually write many Muppet-only sketches that could fit into any episode.  The rest were specific segments written to showcase the celebrity's talents (whether they be comedic, musical, or acrobatic).  The guests were also asked which Muppets they would like to perform with, which was usually the extent of their input.  The best episodes, however, were usually those where the guest would get really involved in the creative process.  Mostly, this meant that professional comedians could punch up a script with a lot more humor.  But with third season guest Harry Belafonte, Henson and his team were able to tap into a spiritual place, previously untouched by The Muppet Show. 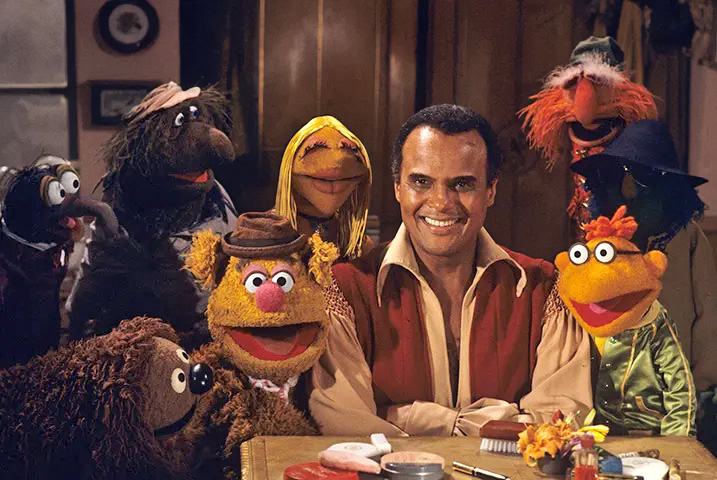 Humanity and puppetry.
Belafonte, known for popularizing calypso music with such hits as "Day O (The Banana Boat Song)," did not make very many television appearances.  It wasn't that he was a private person, it's just that this well-travelled individual saw that he could do more good in the world with his celebrity status than selfishly keeping the attention on himself.  So when he did appear on television, it was because he saw something in the show that spoke to his humanitarian ways.  To him, Henson's family-friendly artistry was one of the most noble aspects about television.  Being able to bring laughter and education through his puppets on The Muppet Show and Sesame Street, he saw that Henson was dong good work.  He was honored to be a guest, as long as he could oversee the script.
After various edits (including the removal of a scene where Belafonte and a Muppet get into a heated argument), Belafonte was satisfied with the material he would perform.  First, for comedy's sake (and as a way to "entice" the audience), he would sing "Day O" with the Muppets struggling to sing along.
Next, to present his musical side and for the chance to perform with his favorite Muppet, Belafonte and Animal had dueling drum solos.
And finally, Belafonte was able to present a song that was dear to his heart, "Turn the World Around."  Based on the lifestyles, mythologies and attitudes of impoverished tribes he saw while in Africa, this song was meant to uplift and encourage viewers to make the world a better place.  Henson and his designers would create new puppets specifically for this number, based on tribal African masks, representing fire, water, earth, and spirit.  Henson took great care in overseeing the masks' production, ensuring that they remained authentic, yet not offensive or religiously inaccurate. 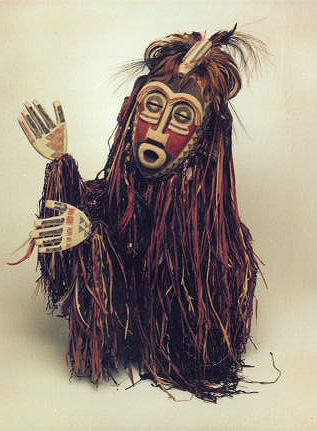 The Spirit Mask
The song became the closing number for the show, replacing the end theme music, as all the Muppets joined Belafonte in his song of peace and positivity.  Even Statler and Waldorf (who usually end the show with one final stinger) got into the spirit of the music and sang along.  This was one episode where negativity was not allowed, and it created one of the most memorable Muppet moments ever.
Belafonte recognized that the Muppets have the power to change the world through love and inspiration.  While most celebrities used their appearances on the show to have some fun or get some exposure, Belafonte used the opportunity to spread his message and to speak for those who lack a voice. 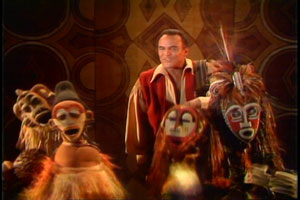