You'll Never Get Out

Jim Henson's second experimental film The Cube can be viewed as a companion piece to Time Piece.  While Time Piece focused on a man trapped by the limitations of time, The Cube focuses on a man confined by space. 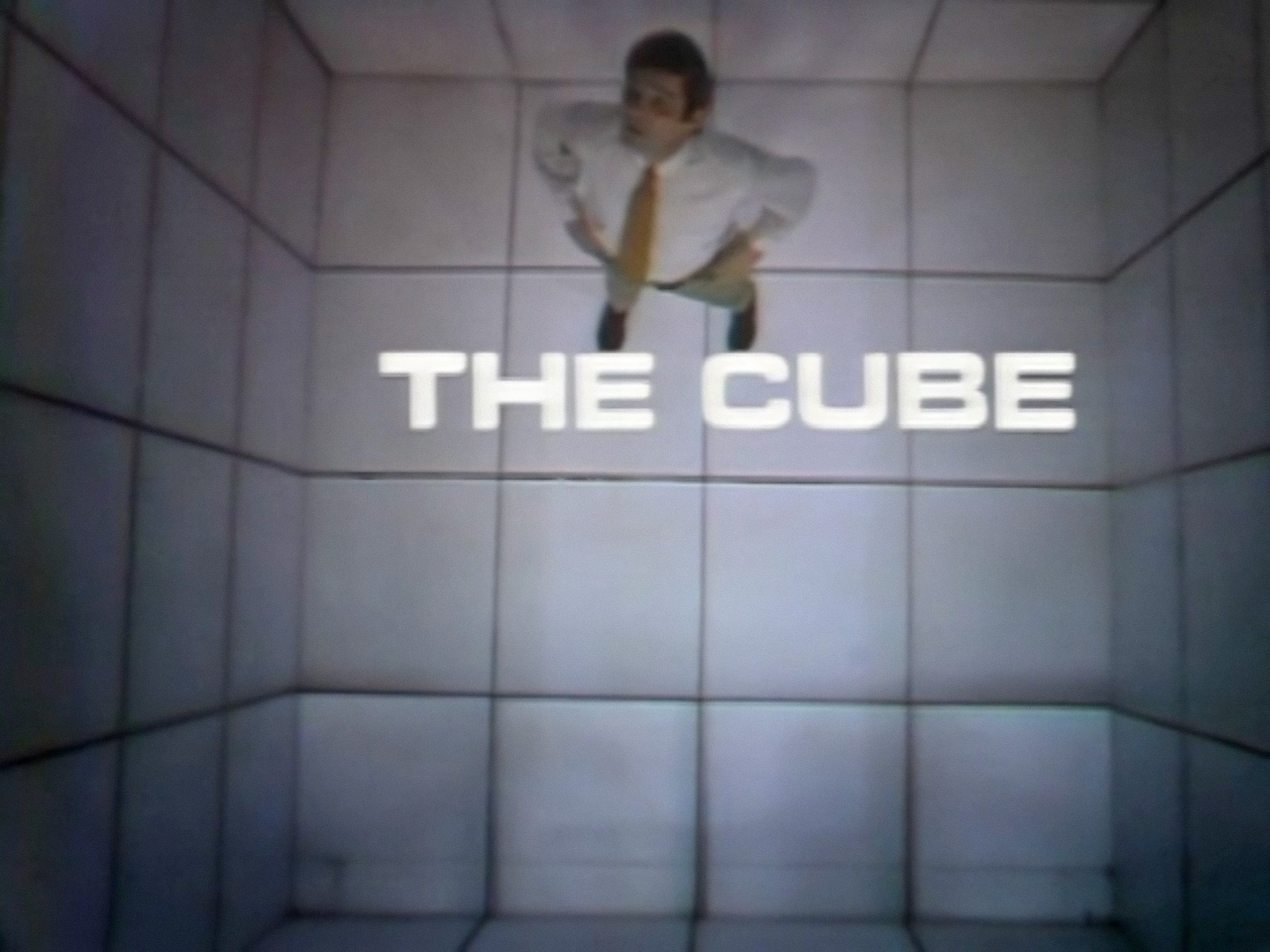 Get used to these walls.
Richard Schaal plays the man who suddenly finds himself in this tiny, windowless white room.  Each side is identical, with a grid of squares that can be manipulated to serve as doors and other passageways for those from outside the Cube.  Without warning, a parade of characters stop by in the room to engage with the man, each as mysterious as the last.  Various clues are dropped, hinting at what lies outside, although most are contradictory (and every single person is untrustworthy, so their helpful words could very well be lies).  Almost every character exists to keep the Man confined to the room and play mind games with him to keep him on edge. 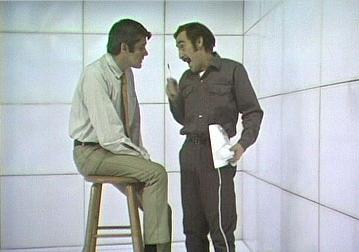 The handyman Arnie is pleasant during his visits, but he has no useful information.
What is clear about the room is that the events that unfold in it are some form of psychological torture (either intentional or unintentional).   Many characters trick the Man into getting his hopes up, while others threaten him or demean him.  As soon as he finds a character to feel comfortable around, he is made a fool by them at the end.  Eventually, he resigns to the fact that he should just expect chaos with every new guest.  But what really makes the owners of the Cube sadistic is not letting the Man take a break.  Watch what entails during the Man's "rest" period.
Yes, the song is a little on the nose, suggesting that the only escape is death.  But it's good to get that notion out of the way early, before the Man feels the need to follow through with it.  At this point, he still assumes he can find some way to not only get out, but also get some answers.
There are many visitors throughout the hour, each presenting a different facet of life to consider (much like the random moments in Time Piece).  The moments that deal with the perception of reality are the most resonant, though.  One man comes in to assuage all fears by informing the Man that it'll all work out in the end.  It is just a television play after all.  To prove it to him, he decides to show him the ending of the film that they are currently in (which shows him still trapped in the Cube). 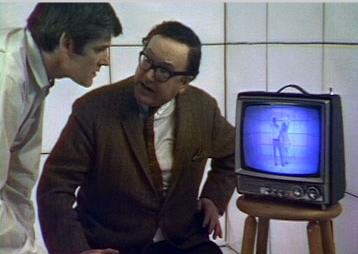 Yes, Spaceballs would later use this as a plot point.
Another moment that blurs the lines of reality comes when another man escapes from his own nearby Cube.  This suggests that the Man is not alone and dozens or hundreds more are undergoing the same torture.  The escaped man rattles off all of the horrible moments he'd suffered and how they were always finding new ways to punish him.  His only solace were the brief times when he was left alone. But, now that he is free, he finds that he misses the familiarity of his own cube.  He decides to go back, even though he knows he'll be punished if the management learned of his escape.  The Cube is all he knows.
Immediately afterwards, the management arrives to ask if the Man saw the escaped man.  The Man keeps quiet about the affair, willing to protect his neighbor.  He has found one person who has suffered like him, one friend.  This kinship is small, but it's enough to make the Man willing to protect him.
Then we learn that the escaped man was just an actor.  Ain't that a kick in the head?
(Another great moment occurs with the management when they offer the Man a chance to escape, no strings attached.  This is storytelling at it's finest.  Despite our lack of details and answers, the audience joins the protagonist in his one goal: escaping the room.  So when he gets his chance halfway through the story, viewers are on the edge of their seat wondering what the catch is or how the Man will miss his opportunity.  It is gut-wrenchingly tense, and all accomplished with just a single set and simple characters.  I won't ruin what happens in this part, but it is perfect.) 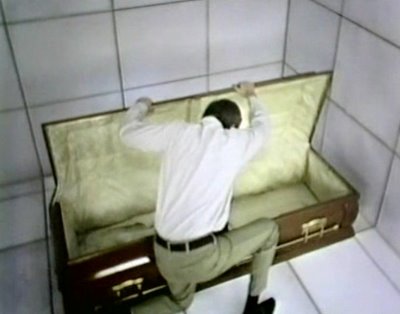 Hmm, a small white enclosure?  What are you suggesting, Mr. Director?
Eventually, the Cube provides the man with one final chance at escape: death.  An hour in hell feels just like an eternity, so there really is no other option for him to take at this point. 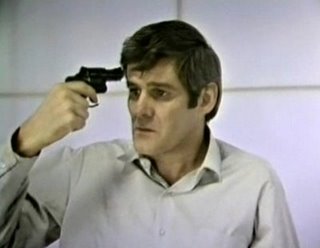 Yes, 1408 would later use this as an entire plot.
AND NOW FOR THE SPOILERS!!!!
The gun fires strawberry jelly and every character joins the Man in the Cube to celebrate his accomplishment (?).  The Man, fed up with the experiment tells them all off, punches a few of them out, and exits the Cube with his dignity intact.  He later tells the director of the experiment that the one thing that kept him sane was the fact that he could rely on his own mind.  Even as all this strange behavior was occurring and he was being fed nothing but false images and beliefs, he could still trust that he was himself.  And to prove it, he cuts his hand to show that he is alive, for he can bleed...strawberry jelly.
Looks like he didn't get very far out of the Cube after all...
THOSE SPOILERS WERE WONDERFUL!!!! 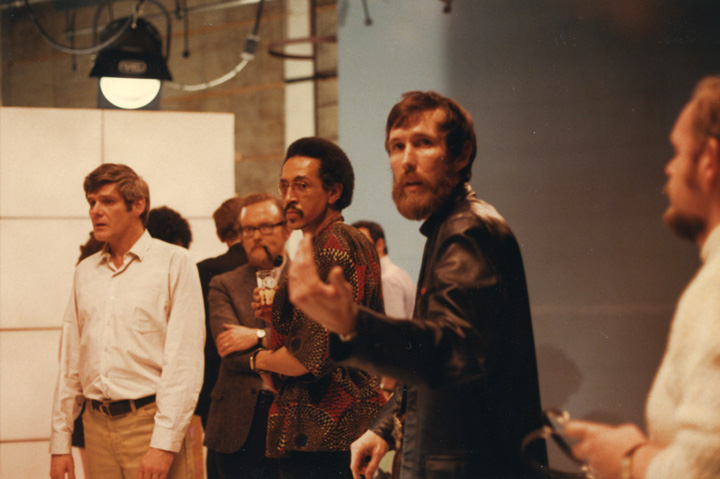 Once more, from the top!
The Cube is a simple exercise in psychology.  While Time Piece invited the viewer to make sense of the visual metaphors placed before them, The Cube brings the whole notion of existence into perspective.  The way we interpret our surroundings defines our own universes.  We are each living in our own Cube.  When the only escape is death, it is better to just enjoy your life sentence on Earth.  It may be filled with confusing and discomforting moments, but we're stuck with them all, for better or for worse.

The entire special can be viewed here in glorious black and white, which adds to the surrealism.
Posted by John H. at 11:28 PM