Labyrinth, Part 1: Be Careful What You Wish For

The experiment that was The Dark Crystal did not live up to the expectations that Henson had set.  Despite being a critical success, audiences failed to agree, resulting in a commercial failure.  Of course, there is something to be learned when the documentary about the making of your movie is far more interesting than the movie itself.  But Henson was not one to give up.  He learned from his mistakes and tackled the main issues head on when setting out to make his next fantasy epic.
First, the protagonist would have to be human, not just humanoid.  The Gelflings unfortunately fell smack dab in the middle of the Uncanny Valley, meaning that audiences found it quite difficult to sympathize with them.  The next film would need an endearing hero that was instantly likable. 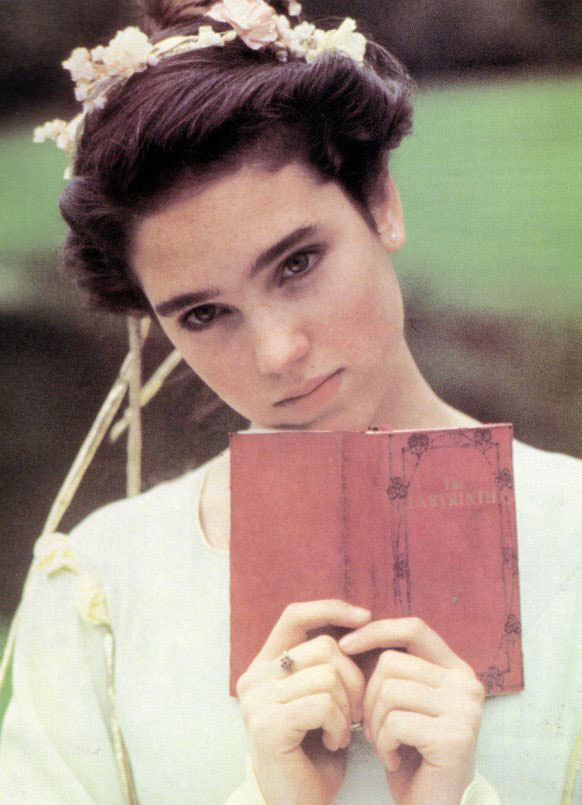 A 15-year-old Jennifer Connelly is a lot more relatable than a petrified monkey puppet.
Second, the setting would not only have to be visually impressive, but it would also have to be a place the audience would want to visit.  The desolate wasteland of Thra was no vacation.  There was nothing intriguing about the landscape.  The new setting should be just as captivating as the characters.  And what could be more mysterious than a complex maze that defies the laws of physics?  The mythical labyrinth was the inspiration and it sets the tone that this movie will be a journey like no other. 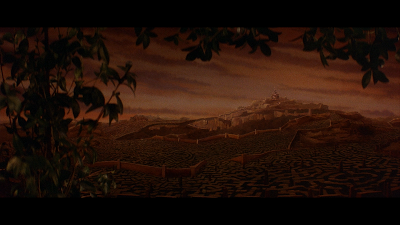 Now this is a story I could really get lost in.
Third, there needed to be humor.  While Henson was trying to break away from his Muppety past and explore new territory, audiences were just confused as to how the man who made puppets explode on a regular basis could produce something so dry and serious.  Henson understood that a fantasy must be fun as well as exhilarating, so he enlisted Monty Python member Terry Jones to write the screenplay, working with conceptual artist Brian Froud from his previous film. 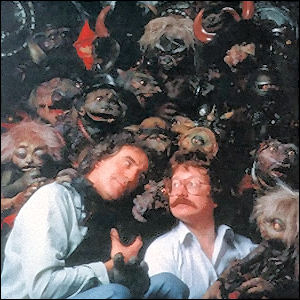 Nobody wants to see a movie with serious goblins.
Finally, the movie needed music.  Not just a score, it needed upbeat songs and enough charm to truly represent the quirkiness of the location and plot of the film.  Henson decided quickly that he should have a well-known musician provide the songs.  Not only that, this person would also serve as the antagonist.  While it is not known how many people Jim considered for the role, he fortunately settled on the best man who would play his villain.  It is impossible to imagine anyone who could bring the fierce presence this role demanded except for David Bowie. 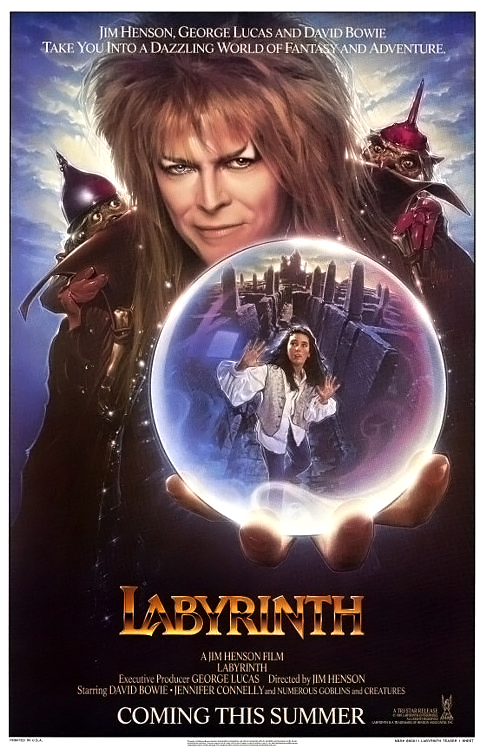 How could you say no to that poster?
With all of these great artists on his team (including fresh-off-the-Star-Wars-trilogy George Lucas), Henson would surely make his dream film once more, and this time, it will be amazing. 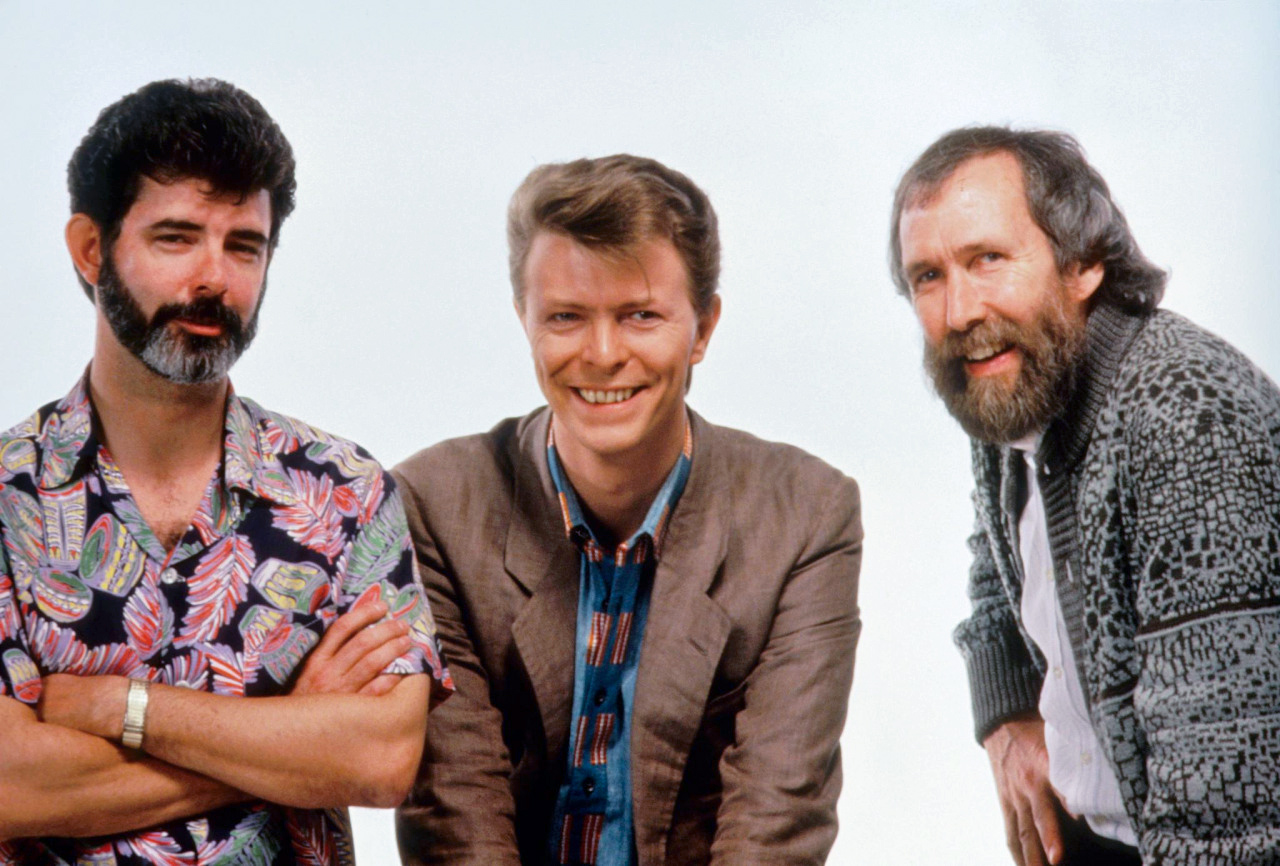 This is going to be great!
The movie begins with the opening credits accompanied by a synthesizer arrangement and a spastic owl that is clearly computer animated flying amongst the words.  Okay, so we're off to a rough start.  But surely it'll pick up soon.
We come across young Sarah (Connelly) who, like most average teenage girls, role-plays by herself in the local park, acting out a scene from her favorite book of the moment Labyrinth.  Her behavior is quite awkward and her ADRed voice doesn't help her situation. 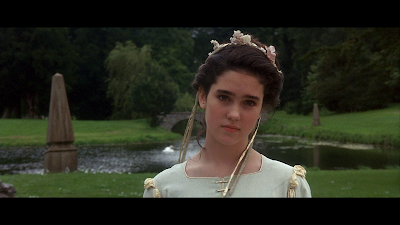 I'm acting!
After forgetting the words to her princess monologue, she notes that it is suddenly 7 o'clock and she must  rush home to babysit her baby stepbrother.  Time certainly flies when you play pretend by yourself.  After receiving rational complaints from her stepmother about her lateness, Sarah storms into her bedroom to lock herself away from her horrible life.  Surrounded by her cherished fantasy books and toys, Sarah slips back into pretty princess mode.  It is at this point we begin realize that maybe Sarah isn't the best choice for watching an infant.

Mirror mirror, on the wall, one day I shall kill them all.
As she applies heaps of lipstick to her imperfect lips, baby Toby screams his head off, realizing that he's going to have to listen to Sarah's out-of-sync voice all night long. 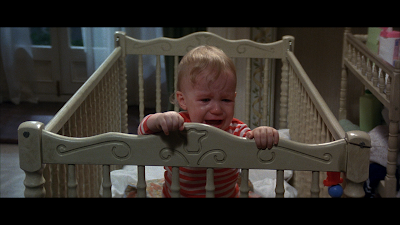 Please stop!  I'm just a child!
The wails of the babe drive Sarah to do the unthinkable.  She summons up a host of goblins to kidnap her brother by saying the appropriate magic words.  I told you it was unthinkable. 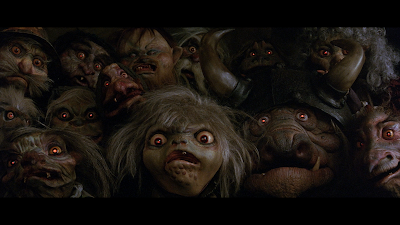 Even the goblins were surprised that she was crazy enough to actually do it.
Fortunately, with the disappearance of her brother comes in the introduction of the best character to ever grace the silver screen: Jareth the Goblin King. 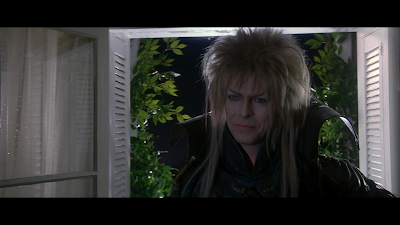 Let's all just take a moment to enjoy the awesomeness.
At this point, the film gets exponentially better.  Every line from Bowie's mouth his just dripping with sensual pleasure.  He teases Sarah with his magical crystal balls, promising her she can have them as long as he's allowed to keep the baby brother.  I will discuss this scene later but the symbolism is so heavy that we just cannot ignore it.  For now, just remember that this exchange actually happened.

Sarah refuses, so he whisks them both away to the outside of the Labyrinth.  He states that if she can reach the center of the maze by the time the clock strikes 13, she can have her brother back.

Lousy Smarch weather.
Sarah sets off, but just because the movie is getting good, doesn't mean she can't let out one last terrible line of dialogue.  "Well, come on, feet," she tells her feet, because she is an average teenage girl.

Her first magical encounter is with a literal garden gnome, who tends to the garden outside the maze walls.  His name is Hoggle and he is in charge of killing the pesky fairies that plague the land. 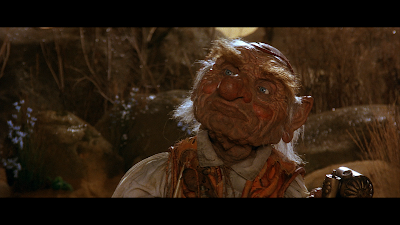 He is also referred to as "Hogwart."  J.K. Rowling presumedly settled out of court.
Hoggle, despite being an ugly sort, is instantly more approachable and animated than an Gelfling ever was.  At the moment, he is just a grumpy dwarf who reluctantly shows Sarah into the labyrinth with a quite confusing misuse of logic.  It seems as if he will only respond to Sarah literally, ignoring her inquiries as to the location of the door to the maze until she says "How do I get in?"  The way this is set up, one would imagine that there is not a door, but rather some other passage.  Except, he just takes her to a huge door.  I had to rewatch that scene multiple times to understand it and what I've found is that it makes absolutely no sense.  Fortunately, that display of nonsense is a perfect introduction to the Labyrinth.
Sarah's feet take her inside the walls where she discovers that there do not seem to be any turns or alternate paths.  Just one unending stretch of corridor.  Right away our concept of reality is shattered.  One would think that, going into a maze, at least it would look like a maze.  But all familiarity is stripped away with the first step, making Sarah's journey seem impossible from the get-go.

The architect must have skipped the first day of Maze-Making 101.
Recalling a conversation with Hoggle in which he claims she takes too much for granted, Sarah surmises that she is taking the infinite pathway for granted as well.  Eventually it is bound to turn.  And so we have our first theme that Sarah must overcome.  Before coming to this world, she had taken her step-brother from granted, thinking she would be happy with out him.  She now realizes that she must be smarter in her actions.  But even her efforts to continue walking straight eventually come to a dead-end (that is to say, it never ends).  Fortunately, there is a Muppet-esque character ready to help Sarah complete her quest.

A little cockney caterpillar instructs Sarah to see things differently.  She was only assuming that she had to go along the path because it looked like a straight path.  She was so focused on the obvious that she didn't think to examine the walls.  The phallic creature points out a space in the wall that Sarah can traverse through and then encourages her to follow the path he suggests.  However, Sarah's naivete causes her to forget the lesson she just learned and she plods on ahead, assuming everything is dandy. 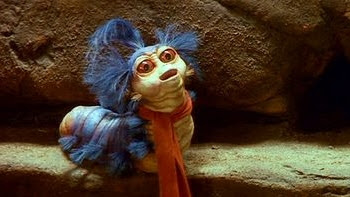 Never trust a worm.
Tomorrow, find out what happens as Sarah goes deeper and deeper into the Labyrinth.
Posted by John H. at 2:00 PM