The Dark Crystal, Part 1: Journey to a New World

In 1977, Jim Henson set forth on a new film project.  He did not have a story or characters in mind, but he knew that he wanted to create a world unlike that of the Muppets.  He wanted to be like Tolkien, who built a fantastical realm from the ground up, paying close attention to the physical laws and scenery and species that inhabit it.  As he planned this project, he came across a book called The Land of Froud. One of the original Froud drawings, "The Boy Asking the Way."
The book was just a series of fantastical paintings made by artist Brian Froud.  There was no story, but each picture was a window into a world filled with fairy-folk and mystical forests.  Henson was mesmerized by the images and he wanted to bring these pictures to life on the big screen.  He contacted Froud and asked him to be the conceptual designer for his upcoming film.  Froud agreed, and together they mapped out the magical world of Thra, the setting for what would become The Dark Crystal. 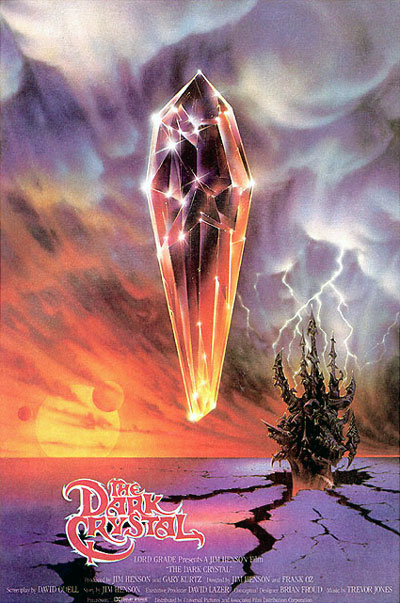 For five years, Henson and Froud, along with co-director Frank Oz, worked on making a movie unlike any that had come before it.  Henson's team of puppet designers worked tirelessly on creating new creatures that were more life-like than the Muppets they were used to making.  Henson wanted to give his audience a feeling of being transported to a new planet, one that looks realistic enough to be plausible but also unfamiliar enough to be admired.  Star Wars had just been released to huge acclaim, so the world was ready to enjoy fantasy movies once again.  George Lucas even lent Henson some of his crew to create the special effects and sets necessary to bring Thra to life.
Finally, on December 17, 1982, The Dark Crystal was released in theaters. 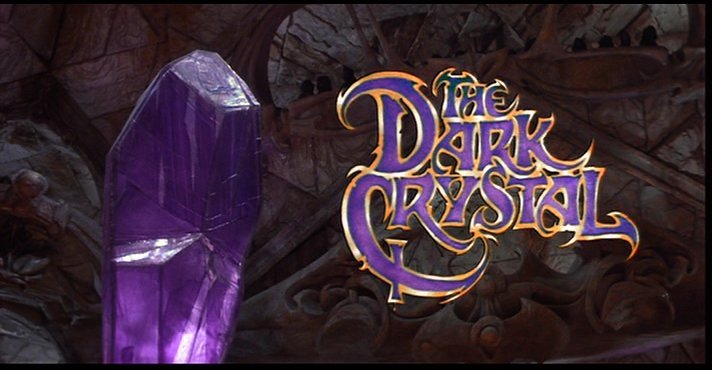 The story begins "in the Age of Wonder."  A thousand years ago, the land was good and peaceful and ruled over by wise, powerful creatures known as UrSkeks, who guarded over the Pure Crystal.  Suddenly, the crystal cracked, and the UrSkeks split into two species: the good, peaceful Mystics (or urRu) and the evil, cutthroat Skeksis.  The world was thrown into chaos and the broken crystal became known as the Dark Crystal.  A prophecy told that one from the Gelfling clan would restore the crystal and bring balance and peace back to the world.  Over the next millennium, the Skeksis killed as many Gelflings they could find, so that they could remain in power forever.

The Castle of the Dark Crystal, where the Skeksis reside.
While the Skeksis and Mystics were once plentiful, only ten of each remain.  Because they were split from the same original creatures, their lives are linked.  So if one Mystic dies, a Skeksis dies, and vice versa.  As each side grows weaker, the Skeksis can only gain strength when one of the three suns of Thra provides light into the Dark Crystal. 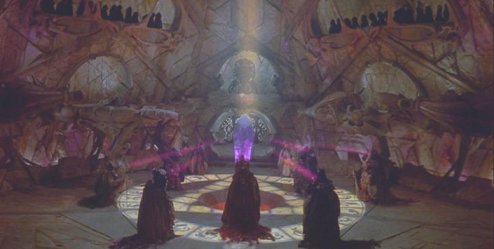 The Ceremony of the Sun
When all three suns align, the Skeksis will become unstoppable and unfortunately, that date is fast approaching.  Even worse, the eldest Mystic who has been training the last Gelfling is on his deathbed, and so the boy must venture out on his quest prematurely.
Even worse than that, the hero of our film looks like this:

He's like a mix between a horse and Pinocchio.
A majority of those five years of film production were spent on the design of the last Gelfling.  The future Mrs. Froud, Wendy Midener designed over 50 varieties of humanoid elves to be the sympathetic hero.  Every time she presented one to Henson, he'd make her try again.  It seems as though they finally just picked one design and ran with it to get it over with, because he is a sorry looking creature indeed.

It's hard to tell from a picture, but his face barely moves.  It's like Thunderbirds meets Planet of the Apes.
Anyway, this creepy monkey dude is named Jen (Jim Henson is his puppeteer, Stephen Garlick is his voice) and he is told by his dying master to find the missing crystal shard so that he can restore the crystal.  He gives him his instructions by way of magical split pea soup. 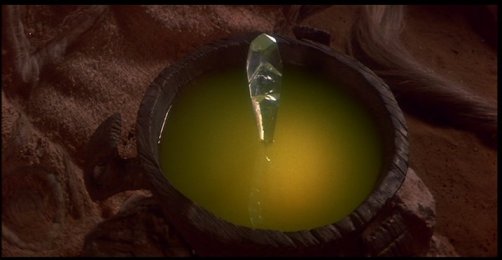 The Chamberpot of Secrets
Since the old master Mystic is dying, that means one of the Skeksis is dying as well.  The Emperor Skeksis is on his deathbed and uses his dying breath to assert his authority one last time.  Of course, the remaining Skeksis want to be in charge and they are just a bunch of vultures waiting for him to die.  Literally.

You look like death.  Well, we all do.
That leering fellow in the above screenshot is the Chamberlain of the Skeksis (a.k.a. skekSil) and he is by far my favorite character in the film.  All of the Skeksis are designed to be grotesque and fearsome, but the Chamberlain is also cunning and crafty.  The designers gave him a permanent smirk that none of the others have.  On top of that, he always seems pleased about something.  Even in the gravest of situations, he mostly communicates by emitting a high-pitched hum as if he just ate a surprisingly good piece of chocolate cake.

"I didn't even know you could bake!  MmmmmMMMMMmmmm!"
(On a quick side note, the Skeksis were supposed to represent the Seven Deadly Sins.  There are ten of them.  Whoops!)
And so, the Emperor turns to dust and the Master fades away.  Jen the Gelfling must now set out on an epic voyage to retrieve the crystal shard and make his way into the Castle of the Dark Crystal!

So it begins....
Tomorrow is Part 2, where we see who becomes the next Skeksis emperor and we meet the film's "comic relief."
Posted by John H. at 5:15 PM