This is it.  The final showdown.  Good vs. evil.  Who will prevail?

Enjoy your last moments of existence, boys!
As everyone gets into position, Kira spots Jen from across the room and tosses him the crystal shard.  They attract the attention of the Skeksis who alert the Garthim.  Backed into a corner by the bugs, Jen jumps from a conveniently placed platform onto the Dark Crystal, but he drops the shard in the process!
He couldn't hold on to it for one freaking second!  Girl's gotta do all the work!
Kira glides down to return it to him and succeeds in doing so.  However, the Emperor stabs her in the back, killing her.

"My only regret was not being born with quicker reflexes!"
For some reason, everyone stops what they are doing, to contemplate the weight of this situation, I guess.  This gives Jen plenty of time to restore the Crystal.  It becomes Pure once again and causes the walls of the castle to crumble, revealing the bright crystal structure underneath.  This is another one of those really cool scenes that's made even better knowing how it was done.  Basically, there was only one take to set up all of the explosives just right.  It took down the whole set to reveal the prettier set underneath and fortunately, they got it right on the first try.

And He saw that it was good.
Everything starts going back to normal.  The Podling slaves get their minds back.  The...Podling slaves regain their souls.  Um...the Podlings are de-zombified....  Okay, so only one thing really happens.

And there was much rejoicing.
Jen runs over to cry over Kira's body.  Because they are in love.

Who cares that the universe is being fixed?  What about MY universe?
The Mystics all surround the Crystal, which shoots beams of light through them to attract the Skeksis. 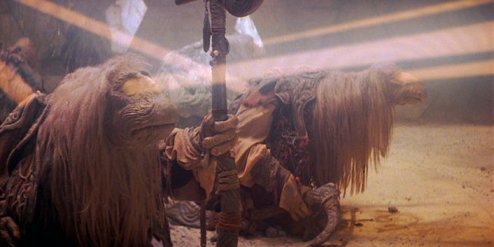 It's all starting to make sense now!
The Mystics and Skeksis bond, forming the Urskeks once more.

Just when the movie couldn't get any creepier...
The Urskeks thank the Gelflings for their courage and sacrifice and as a bonus, restore Kira to life. 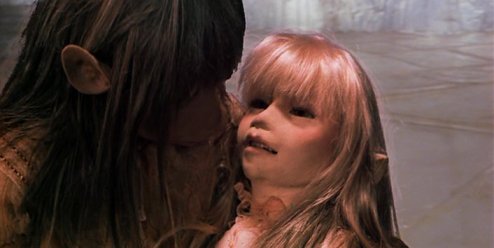 Only the good die young and are resurrected shortly thereafter.
The Urskeks then depart and leave the Gelflings to start repopulating the world, lest it become overrun with Podlings.

And they all lived happily ever after!
So ends The Dark Crystal.  An ambitious film that Henson hoped would change the face of cinema forever.  Was it successful?  Well...it depends on who you ask.
At the time, critics were fond of it, due to the visual marvels unlike any movie which had come before it. It's box office performance was a bit lackluster, due to the fact that it could not really find an audience.  It was marketed towards children, but the themes were very mature and the characters were scary and grotesque.  There is little by way of action or humor, so few children could sit through it easily.  As for the adults...they found it to be too childish.  It's a weird movie that exists for everyone and no one at the same time.  (Also, it had to compete with E.T. and apparently audiences could only handle one creepy-looking, long-fingered, rubber hero at a time.)
Because Henson set his sights so high, he was bound to fall at some point.  He flaunted the fact that he only cared about the setting and that the story and characters were secondary to him and it certainly shows.  The plot is straightforward and unoriginal and the characters lack personality and the motor-skills necessary to convey emotion properly.  This was Henson's first attempt at breaking away from his cartoonish Muppets in order to create realism, but unfortunately, he could not recapture that spark that he put into his former abstract puppets.  He had created an art form by being able to portray numerous emotions using only one hand inside of a sock.  Even though Kermit the Frog is "simple" he is moldable.
The Gelflings are not.  Kira looks okay and, at certain angles, Jen isn't too bad.  But their wide-eyed dopey gazes drive home the fact that these are not living creatures, even though they are supposed to be our human connection to the story.
The Skeksis, on the other hand, look phenomenal.  Villains are always more fun, and the Skeksis are no exception.  But while they were blessed with good-looks, they were gypped in the dialogue department. Having them speak broken English hampered their threatening influence and just made them all seem quite inept.  The only character worth following was the Chamberlain, and it was nice to see at least one of the characters have some depth and complexity.  I wish he had played more of a role towards the end of the movie (i.e. he should have been the one to kill Kira).  After he goes back to the group, he falls into the background.  There could have been more ambiguity to his morality as well.  I liked him so much because I never knew what he was going to do.  But as soon as he betrayed the Gelflings, he became no different than the other Skeksis.  Maybe that was the point, but it seemed more like a lack of attention.
I know that this movie took five years to make, but it would have greatly benefited from being much longer, like a true epic.  The story could stay as is, but more time could have been spent developing the characters, rather than have them be cogs in this storytelling machine.  In one interview, Frank Oz gushes over the character of Aughra, noting how "beautiful" she is.  Of course she's grotesque, but he is referring to the amount of detail spent in crafting her appearance.  Had they spent as much time with her personality as they did with her look, I would have agreed with him.
The movie gets by on it's appearance, and Henson at least succeeded in crafting a fully realized world.  It seems like this is his Avatar, which was so focused on the visuals that they forgot to work on the story.  Sadly, Henson missed another crucial point in world-building.  It should be a place that the audience would like to visit.  I'm not saying all movie worlds should be ideal utopias.  Many films with bleak fully-realized worlds are great because the story centers on the corruption (like Blade Runner).  But for a kids film, make it a place kids want to go to.  They can have bleak elements, like Fantasia from The Never-Ending Story or Willy Wonka's chocolate factory, but there should be some whimsy to it as well.  The world of Thra, as depicted in this movie, consists of desolate deserts, barren mountains, slimy swamps, run-down villages constantly under threat of monsters, and hellish dungeons.  Yes, the world is supposed to be in disarray due to the Skeksis' rule, but it can at least be beautiful in it's ugliness.
To end things on a positive note, I appreciate Henson's attempt at creating a new mythology.  Having the good urHu and the evil Skeksis forever linked was a good choice and it was not like any fantasy movie I had ever seen before.  Some movies imply that good cannot exist without evil, but this one was so upfront about it that it was impressive.  For example, when one Skeksis is destroyed in a boiling pit, his Mystic counterpart spontaneously combusts as his brethren look on in contempt.  That's cool!  That's interesting!  More of that please!  Fortunately, the world of The Dark Crystal does live on in manga and there is a sequel in the works! 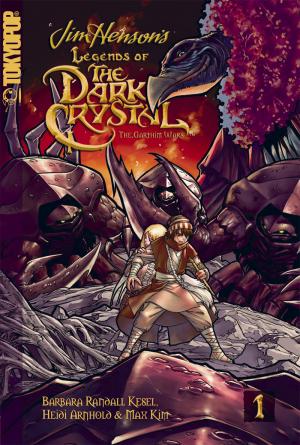 They actually make the Gelflings look normal!  And is that the Chamberlain I see?
Jim Henson had many good instincts and ideas in creating the world of Thra.  And his attention to detail paved the way for the Jim Henson Creature Shop, which went on to produce many more movies and television shows, and it continues to help out in providing puppets and animatronics for numerous other productions (Teenage Mutant Ninja Turtles, anyone?).
If his movie suffered from anything, it was that it felt incomplete.  There is more to explore and discover.  We want to return as soon as it's over.  And in that regard, the film is a success.
Posted by John H. at 11:56 PM