Since the invention of film, there has been a sense of magic and triumph associated with going to the movies.  Even today, with our megaplexes cramming and endless supply of Hollywood drivel down our throats, we still feel as if an epic night is about to unfold when we visit the theater.  No matter what kind of movie we are about to see, they are each treated with the same respect.  Hundreds of people gather in a darkened room, and fall silent in unison as the picture begins.

The dimming of the lights is not only a way to see the film better.  It is a way to block all of our other senses so that we cannot help but be immersed in the world presented to us.  Outside distractions barely register with us and we start to care deeply about the images on the screen, and nothing else.  Filmmakers take advantage of this moment to present a myriad of exciting and dramatic adventures, so that we may live in fantasy for a couple of hours.  It has the exact same effect as a dream, only you are awake.

Everything is bigger in the movies.  The visuals, the effects, the budget.  Everything is grand.  The original Muppet movies appreciated that and used the new medium to explore new territory.  The Muppet Movie chronicles the exploits of the Muppets making their way to Hollywood to make the movie, so it is very self-referential.  But things are taken to a whole new level in the sequel The Great Muppet Caper. 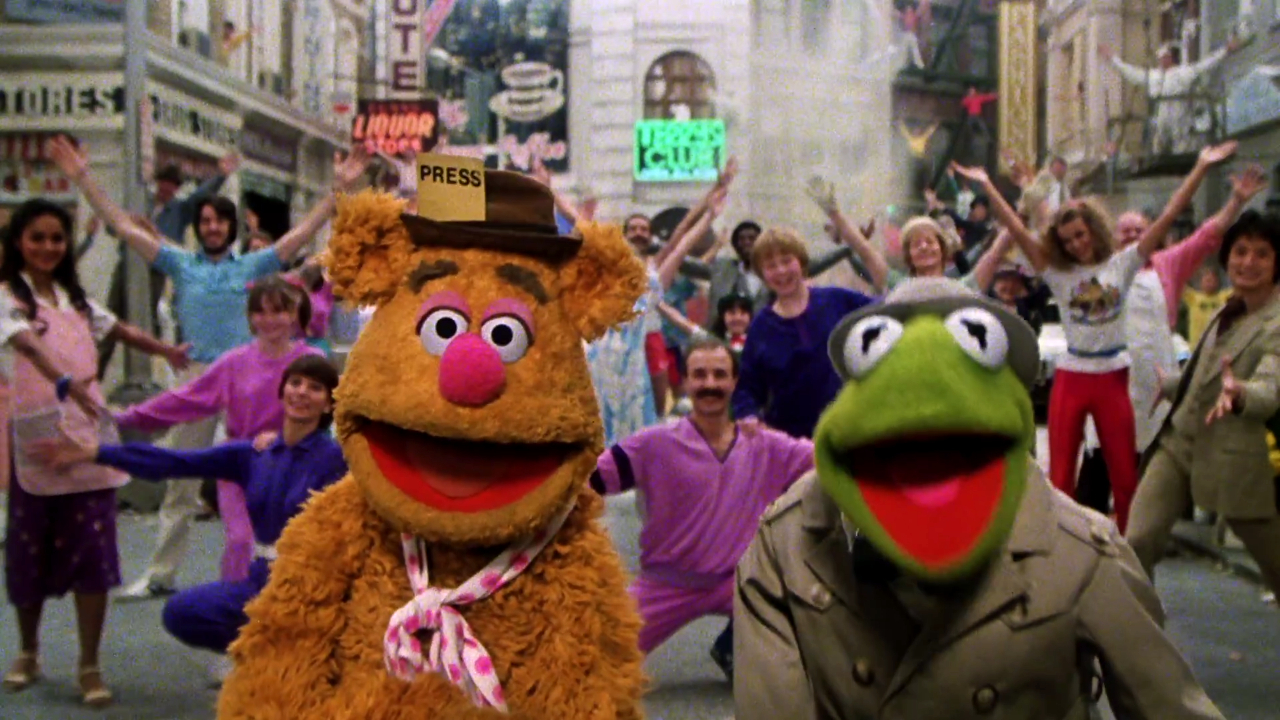 It's gonna be terrific!
﻿
This film stands apart from all other Muppet films because it is an original story, yet the Muppets aren't playing their usual selves.  They are investigative journalists in London who get caught up in solving a jewlery heist.  I plan on discussing the film in depth later, but I just want to focus on the beginning where our characters set the stage.  They prepare the audience for an event unlike any they have ever seen with the opening song, "Hey, A Movie."


(Song starts at about 2:50)﻿
Just the phrase itself gives me goosebumps.  By the time this opened, the world had experienced over half a century of the film industry.  It was no longer fresh and new.  Movies were standard.  The norm.  But this song revitalizes the exciting notion of going to the theater all over again.

The song was used agian in the television special "The Muppets Go to the Movies," where in famous scenes are recreated with the Muppets, as a tribute to how far the organization has come.  I prefer the Caper version of the song though, due to the mayhem and chaos that ensues.

The spectacle of it all is something worth revelling in.

And today, we get to experience that all over again.  The Muppets have made many movies since the original ones, but none have been treated with such aplomb and anticipation as today's new film.  This is an event worth celebrating, because we get to share the excitement together as a society.

Email ThisBlogThis!Share to TwitterShare to FacebookShare to Pinterest
Labels: hey a movie, the great muppet caper, the muppets, the muppets go to the movies