As times change, so do the morals and virtues of society.  During the '70s, it was perfectly fine to have one's child idolize a blue, furry, junk-food eating machine.  Kids love cookies!  Where is the harm in that?  But, after a decade of tooth decay, childhood obesity, and early-onset diabetes, it was time for a new hero to take the stage.

And that man...was a bunny?
Captain Vegetable was his name, and his aim was to spread veggie awareness with his meatless attitude and powers of persuasion.  He has a tough job.  If there is one thing children universally despise (besides using their indoor voice), it's vegetables.  Picky eaters can get on board with breads and meats and fruits just fine.  But enter yucky vegetables into the mix and you've kickstarted a never-ending battle of wills and determination as your toddler sits, staring at his plate, refusing to budge.  He won't even fall for the "just one more bite" ploy.  That bite of lima beans or brussel sprouts may seem like a second to the parent, but thanks to the youthful relativity of time dilation, that second will last hours.  The lingering taste of icky broccoli will haunt their dreams for weeks.
And they have to do this every day?!  Impossible.  Only some crazy weirdo could enjoy vegetables on a daily basis.
Fortunately, Captain Vegetable is up to the challenge.  Kids who refuse to eat anything but candy or pasta will have to learn to resist the power of a really catchy theme song!
Captain Vegetable appeared a few more times, but since his first appearance drove the message home, there was no need to make him a recurring character.  Which is sad because I would have liked to learn more about his backstory.
What makes him tick?  How did he decide to become Captain Vegetable?  What is his true identity?  Does he actually have powers or does he just have the costume?
More importantly, there could have been a plethora of storylines based on his relationship with Sesame Street's other resident superhero, Super Grover.  Would they have teamed up?  Or would they become rivals, each outsmarting the other?  So many wasted opportunities...
With Hollywood's passion for updating superhero franchises, it's surprising we have yet to see a gritty reboot of this misunderstood pusher of plants.  So under-appreciated, yet completely necessary for our continued survival.  A new Captain Vegetable would clean up our country, which needs him now more than ever.  Who is willing to step up to the challenge of being the world's greatest superhero?! 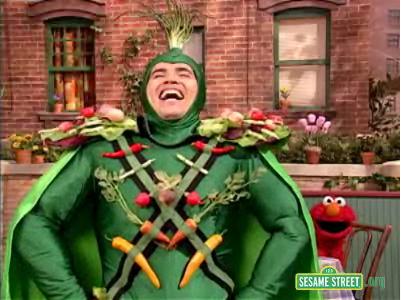