While babies may be incapable of harm and destruction, that does not mean they are inherently good.  Due to a limited experience in the real world, a baby's perception of the universe is ever-growing.  But at the beginning, their scale is quite small.  It is limited to only what they can sense.  They cannot envision life outside of their domicile.  They cannot even envision life outside of their playpen.  Peek-A-Boo is such a big hit because as soon as something leaves their field of vision, it ceases to exist.
And so, babies cannot help but be self-centered.  And it is from this perspective that negative attributes form and must be eliminated if we expect babies to enter human society.
"Noisy Neighbors," the very first episode of Muppet Babies, sets the stage and introduces the characters and concepts that will be explored over the run of the series.  It tells the tale of the gang's attempts to keep Baby Animal quiet so as not to wake their police officer neighbor.  Let us meet the stars of this morality play. 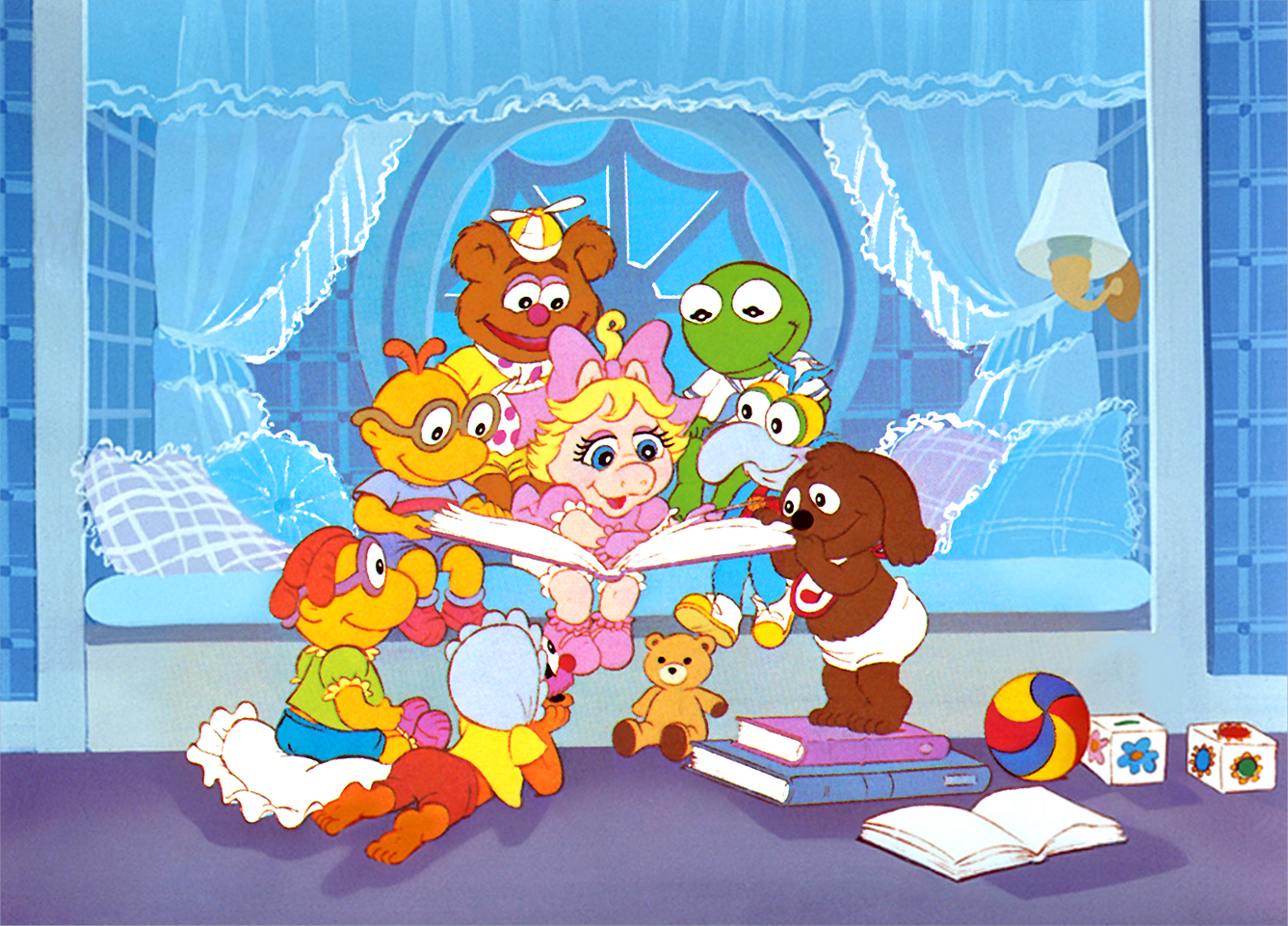 Noisy Neighbors, a Tragedy in Three Acts
(Act 1, Act 2, Act 3)
Starring:
Baby Piggy as Wrath,
a bossy brute who dishes out pain when things don't go her way
Baby Fozzie as Greed,
an ambitious joker who puts his desire for fame and fortune above all else
Baby Scooter as Envy,
a meek nerd who lives in the shadow of his stronger sibling
Baby Skeeter as Pride,
a competitive show-off who listens to no one but herself
Baby Animal as Gluttony,
a ravenous beast who always follows his gut (and nothing else)
Baby Rowlf as Sloth,
a laid-back pooch who only helps out when it will cause him no strain
Baby Gonzo as Lust,
an amorous weirdo who refuses to let anything hinder his passion
and
Baby Kermit as Job
The episode begins with foray into the make-believe.  A cardboard box becomes a submarine while a couch becomes a battleship.  The two naval fleets battle it out until the Muppets caretaker intervenes to instruct the children to be quiet so as not to wake their sleeping neighbor.

Baby Animal does not listen to these demands, and as soon as Nanny leaves, he begins making a racket. Many parents are familiar with fussy infants who refuse to sleep.  Animal takes this to the next level by pounding the ground causing earthquakes and eating the carpet.  Kermit rallies the troops to calm Animal down, but not much seems to work.

Piggy makes up a fairy-tale involving a dragon that Fozzie and Gonzo fail to slay.  Kermit succeeds through the power of dance, riling Animal up.

Rowlf attempts to calm things down with a lullaby and at first, Skeeter and Piggy fight over who gets to sing.  When it is settled that everybody will sing, a rousing number once agin riles up Animal.

Finally, Gonzo suggests watching TV and imagines himself as a superhero, saving Piggy from a plummeting elevator.  Animal usurps the story as a King Kong figure and is riled up all the more.

After every outburst from Animal, Nanny has appeared to shush the youngsters, claiming the policeman next door is complaining.  Just like any authority figure in a child's life, Nanny's word is law.  There is no arguing or complaining allowed.  She is a giant and must be obeyed.

For you see, Nanny is God.  Although she is not always seen, her presence is constantly felt.  Despite the babies' attempts to remain faithful and good, they always slip up sooner or later, and Nanny is there to smite them.  The fact that we never see her true face only supports the notion that she is the mysterious omnipotent ruler of the universe.

In Nanny We Trust
Although her voice is provided by the calm and soothing Barbara Billingsley, her judgment is swift and no one dares cross her.  Throughout the series, the babies always manage to stay on her good side, fortunately.  She remains understanding in the knowledge that they have much to learn about the world and they will often be led astray and tempted by sin.  She is there to guide them.  And when she disappears, she must rely on her favorite child to lead the masses.
Young Kermit, barely out of his pollywog stage, is already expected to guide his fellow man.  And in his first task, he fails miserably.  It is nigh impossible to keep Animal quiet, but Kermit does not give up.  Failure after failure, he seeks out new methods to keep the Devil at bay.  And finally, when he is about to give up all hope, the Almighty Nanny reappears with words of salvation.
The neighbor has left for work and the kids are free to make as much noise as they wish.  Their efforts have not gone unnoticed and our Lord Nanny smiles upon the infants.  She rewards them with eternal peace and slumber.
And so, despite the permission to raise hell and sin until the cows come home, Kermit and his brethren rest, free from temptation.
Posted by John H. at 11:47 PM