With the Skeksis Emperor dead, it is time to reign in the new leader.  The Chamberlain believes it should be he, and the others tend to agree until the war general skekUng demands the throne.  To settle this dispute, there is only one solution: Trial by Stone!

The combatants take their swords from the stone.
Although it is not entirely clear how the battle works, it appears that each fighter takes turns striking the stone.  Whichever one destroys it first is the winner.  My hesitancy lies in the fact that the stone clearly has been struck many times before, as its center has been chipped away.  But the stone is destroyed for the first time in this battle.  So maybe it's just whoever can remove the largest chunk.
At any rate, skekUng the Garthim-Master succeeds and is crowned as the new Emperor.  Not only did the Chamberlain lose the fight, but he is promptly banished from the castle and stripped of all his clothes.  Evidently, the more layers of material you own, the wealthier and more powerful you are, so it is quite significant to see him reduced to this scrawny weakling in front of his cohorts.

The Chamberlain is reduced to nothing.
This speaks volumes for this evil race of creatures.  Despite being on the verge of extinction, they still selfishly knock down anyone who stands in their pursuit of power.  Although they would fare much better by sticking together, they lower their numbers through petty contests and laws.  The Chamberlain is hurt and humiliated, but his new goals and motivations remain unclear.
I want to take a moment to discuss the evolution of the Skeksis language.  In the film, the speak in short, simple English sentences, but originally, Henson created a new language for them.  It was based on Greek and Egyptian words, and it was to convey a sense of unfamiliarity to the audience.  He thought it would not make sense to have everyone speak English in this alien world and that the Skeksis' goals were simple enough that no translation was needed.  When shown to test audiences, people were able to follow the story, but the long stretches of gibberish caused them to lose interest.  And so, English voices were dubbed over the mouth movements of the creatures.
But, as I stated yesterday, the Chamberlain mostly communicated through his high-pitched humming, so he did not have many opportunities for dubbing (since is mouth was usually closed).  As a result, he becomes the least talkative of the bunch and therefore, the most interesting.  Every other character in the film says exactly what they are thinking and there is little depth to their personalities.  By remaining silent with a constant smile, the Chamberlain becomes mysterious.  His actions are the hardest to predict.
Back to the story.  The Dark Crystal starts making an alarm sound as it senses Jen coming towards the castle.  The new emperor sends out his henchmen the Garthim, giant bug/crab/robot-like soldiers to kill the Gelfling.  As he leaves the castle, the Chamberlain watches the Garthim leave and gets an idea.
As Jen climbs up Tentacle Mountain (?), he meets a one-eyed old hag named Aughra, who is performed by Frank Oz (and he gave her a feminine Yoda voice during the initial shooting before her voice was dubbed over by Billie Whitelaw). 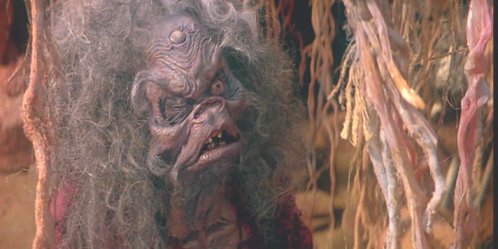 Just in case you thought the bad guys were terrifying...
Luke, I mean, Jen had been told to seek out Yoda, I mean, Aughra by his recently deceased master Obi-Wan Kenobi, I mean, the Mystic Master urSu.  She is a fast-talking psychic astrologist who possesses the crystal shard (That was easy to find!).  She welcomes Jen into her observatory and tells him about the Great Conjunction, i.e. the End of the World.  Or the Beginning.  You can never get a straight answer out of her. 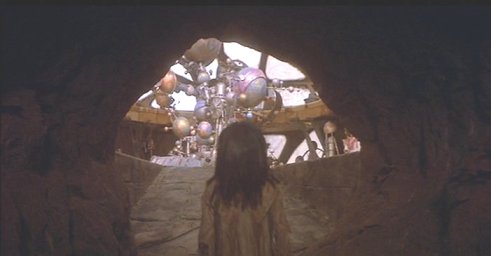 Welcome to Tomorrowland!
She gives Jen a bunch of crystal shards, and tells him that he must choose the correct one or else...there wouldn't be a challenge for him.  He struggles to determine which is the correct one as they all look alike when he suddenly remembers the song of the urHu, which sounds like the beginning of "Twist and Shout."  He whips out his flute so that he can get this sock-hop started!

Shake it up baby, now!
The correct shard responds by glowing and the Mystics sense that it is time for them to start their trek to the castle so that they can reunite with the Skeksis.

Don't worry, they walk painfully slow.  The movie is far from over.
I should probably take this moment to describe the Mystics.  They are giant, hunched-over, four-armed Fraggle-like things that take forever to move or speak.  These creatures are most like the ones found in the original Froud drawings, and therefore, Hensons wanted to keep them in the film.  However, these puppets were the hardest to control.  The most well-trained disciplined dancers and acrobats had to operate these beasts and they were in the most uncomfortable position the whole time.  Imagine having to squat in order to get to a place.  Now imagine that that was the only way you were allowed to move.  Now imagine you had to wear a suit that was a couple of hundred pounds while you did that.  And you were expected to use your arms to control the face and arms of the suit.  That's what the Mystics were like.  They could not shoot scenes longer than a minute when they were present, due to the pain caused by acting in them.
So yeah, these things have to traverse the whole country by the end of the film.
Suddenly, the Garthim crash into Aughra's pad and start wrecking up the place! 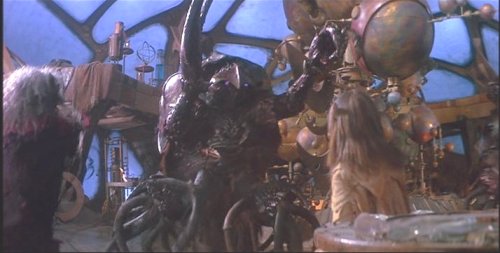 AARRROOOOOOOO!!!!
Jen manages to escape with the shard in tow, but Aughra gets captured by the scuttlebugs and loses everything. 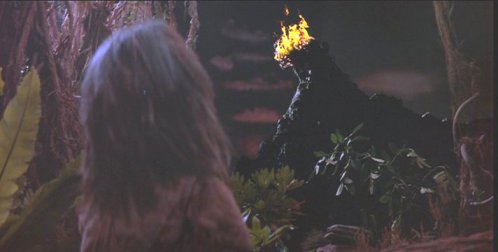 After that night, Pride Rock was never the same.
Jen spends the night in a forest were every single thing is alive and not in the ways you would expect.  (I couldn't find the original clip, but some person decided to give this scene his own soundtrack and it's basically the same idea.)
The clip cuts out at the best part, right before Jen hears a strange noise (in a forest of strange noises) and then turns to the camera, as if to say "What should I do now?  Audience, you decide!"
The noise turns out to be a creepy little dog-like furball who startles Jen so that he falls into the creek.  And then he looks up and sees the owner of the dog.

And lo and behold, this new person looks almost familiar...almost as if she were... 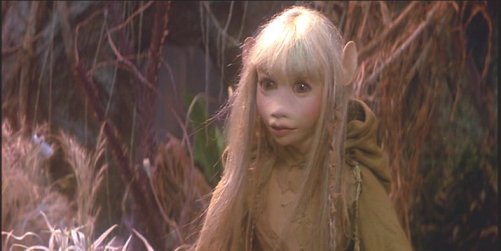 ...another Gelfling!
Join me tomorrow for Part 3, where we learn the truth about the Gelfling tribe, as well as the habits and lifestyle of the evil Skeksis!
Posted by John H. at 4:51 PM