We last left Smollett dangling over his doom, lest Gunn reveal the true location of the treasure.  Gunn quickly tells Silver and, as her reward, she joins Smollett in his peril. 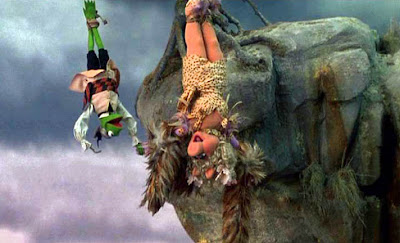 This is another fine mess you've gotten us in.

Smollett and Gunn make the best of a bad situation by singing the love song, "Love Led Us Here."  Even though they have spent years apart and are about to die, at least it will be together.

As they sing, we see the pirates celebrating over the mounds of treasure, as their love for money as led them here as well.  It's nice that everything turns out happily for everyone. 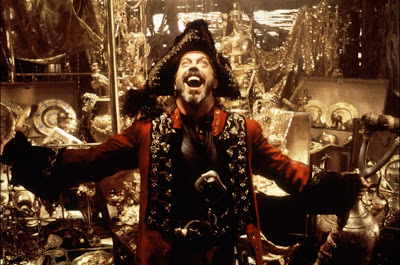 It's good to be the pirate king!

Oh wait, those are the bad guys.  And Miss Gunn's rope breaks!  But Smollett catches her before she plummets to her death.  Why this doesn't also break his rope, I don't know.  But it's funny! 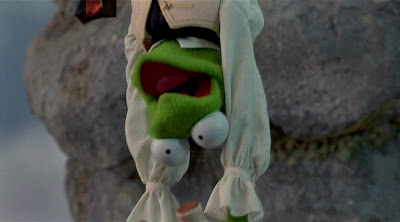 Fortunately, Hawkins has directed the ship over to the cliffs to save the two captives.  They all descend upon the island and the heroes and pirates clash for an epic final battle.  I really which this clip were one YouTube because it is fantastic.  Kermit and Sam the Eagle swordfight alongside each other as other Muppets find themselves in more comedic situations.  Perhaps you should just watch the movie, because the climax is worth it.

Once most of the pirates are taken care of, Hawkins stands up to Silver and, as a sign of respect, Silver turns his sword over to him.  The heroes take the treasure and lock up the pirates for the return voyage. However, Silver manages to break free from his cell and swipes some of the money and a lifeboat.  Hawkins spots him and prepares to turn him in, but Silver holds him at gunpoint.  He tells Hawkins that he truly admires him and cannot bring himself to shoot him, because he believes, in another life, they could have been valuable friends.  Hawkins lets him go, which is just as well, since the lifeboat was one of the faulty ones.  Everything is brought full circle!

The heroes sail off for more adventures, Silver winds up back on the island, and everyone lives happily ever after. 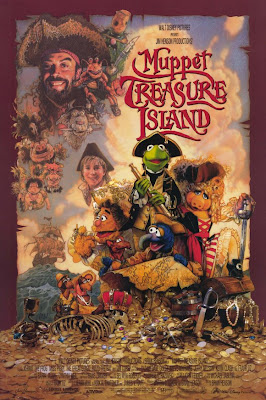 This was quite the surprise!  Having only seen this film once as a child, I was afraid my clouds of nostalgia would have distorted my perception of the film.  I remembered it being funny, but I didn't know if it would hold up at all.  Turns out I had nothing to fear.

This movie is often discussed in comparison with The Muppet Christmas Carol and to me, it is a clear improvement.  The Muppets become the focus of the film, despite playing secondary roles, and the original tale remains as untouched as a G-rated Disney version of the story can be.  Some people complain that these two movies are drastically different from the original three in that they feature humans in a Muppet world rather than Muppets in a human world.  And that is correct.  It is very different in that sense.  It doesn't make it bad.

In fact, almost every thing is very good.  Here are the five reasons you should watch this film and include it in your Muppet canon:

1) The relationship between Jim Hawkins and Long John Silver is actually complex.

These are our two main humans and our closest connection to the original source material.  While Jim can be a little bland at times and Tim Curry is not as over-the-top as some of his more iconic roles, there is a real heart to their friendship.  This is one of the most crucial aspects of the book.  While it bills itself as being a rollicking tale of pirates and adventures, it is actually about a boy finding a father figure who is unable to be the perfect role model he needs him to be. 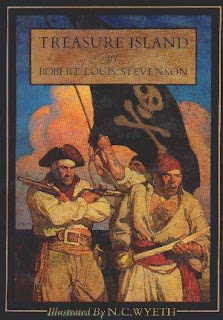 Despite Silver's piracy and villainous behavior, he never really seems to be a bad guy.  Sure he nearly kills some of our heroes, but it's because they stand on the opposite side of the morality spectrum than he does.  He grew up as a pirate and it is the life he is used to.  He wants treasure, but he wants Jim to respect him more.  That's why he lets Jim go when things turn dangerous.  That's why he willingly surrenders to Jim when he has the upper hand.  And that's why he's heartbroken when Jim threatens to turn him into the authorities.  He knows that it's the "right" thing to do, but the fact that his new friend is considering sentencing him to death truly humbles the pirate.

As a kid, I glossed over their scenes, but now, I appreciate the movie for being bold enough to include them.

2) The classic Muppets are perfectly cast.

My biggest issue with The Muppet Christmas Carol was when the Muppets behaved more like themselves when it didn't make sense for the characters they were portraying (Waldorf and Statler especially bothered me, even though I know they are fan favorites).  Here, each one takes the character they are assigned and makes it their own.  Kermit is a Kermity Captain Smollett, but he still takes charge and makes serious decisions.  Fozzie's Trelawney is humorous and plays up the idea of a rich eccentric.  Piggy's Gunn is doing a lot better for herself than the disheveled Gunn from the story, but it services the plot just fine.  And Sam's Arrow...well, I'll get to that later.

The Muppet Christmas Carol had too many clashing elements, but here, the balance works to the story's favor.

I don't think any other Muppet movie has added as many new speaking Muppet roles as this one did.  Yet, each new character fits right in with the world of the Muppets.  They are funny enough to hold their own scenes and they allow for some great musical numbers.  Seeing the boat filled to the brim with so many Muppets was great.

Also, the sets were stylized, yet still magical.  This felt like a very Disney movie, moreso than any of the previous films, but I mean that in terms of quality.  Through clever effects, the Muppet world actually felt grand!  With all the new characters, it made it seem as if there are many more Muppets out there waiting to be discovered.

4) Hans Zimmer did the music.

Hans Zimmer did the music.


5)  Sam the Eagle has a surprisingly large role.

Frank Oz's go-to Muppet characters are Fozzie and Miss Piggy.  He spends so much time with these two that the others fall by the way side.  But here, he actually has more screentime than the other two.  Actually, Oz is playing three of the four important Muppet characters in the story (Gonzo and Rizzo have less to do here than in Christmas Carol which is a shame).

But it's great that one of my favorite Muppets finally gets his day in the sun.  Sure, he suffers from his usual delusions of grandeur, but he still comes out as a hero at the end. 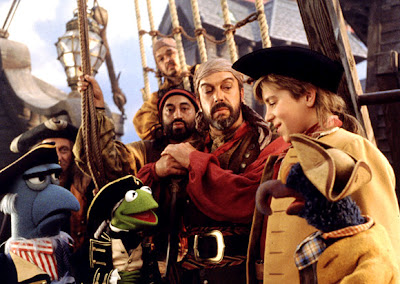 I once met a Muppet fan who claimed that her favorite movie was Muppet Treasure Island.  I thought it was blasphemy to say such a thing and deny Henson's greatness.  But, the Jim Henson Company is so much more than Jim.  It is filled with great writers, puppeteers, and creators.  His son, Brian, directed this film and I must say, it is near perfect.  While I probably wouldn't put it above The Muppet Movie or The Great Muppet Caper, it is a very close third.  And, it is one that I'd be willing to watch again and again.