As Long John Silver forces Jim to use his compass and map to lead the pirates to the treasure, Smollett and company come to shore and set up camp for the night.  However, they are soon taken in by a mysterious tribe of native pigs, led by the controversially named Spa'am. 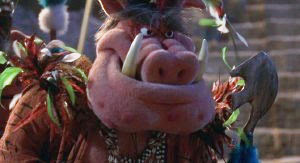 Only good lawsuits can come of this.

Now, this group of island natives was not present in the original book, but with the grand display that is put on, you kind of wish Stevenson had included them.  Actually, the latter half of the movie tends to stray quite a bit from the original, so it's best just to follow along with what we have.  Spa'am reveals that the pigs worship an island goddess, who they refer to as "Boom Shakalaka."  And, while it should be clear who exactly that goddess is, it is still a grand entrance.

Boom Shakalaka is none other than Miss Piggy, er, "Benjamina Gunn," (based on Ben Gunn from the novel).  Both characters were once part of Flint's pirate crew who had been abandoned on the island, but since Piggy is playing the role, her Gunn was also romantically involved with Smollett prior to her days of piracy and being marooned. 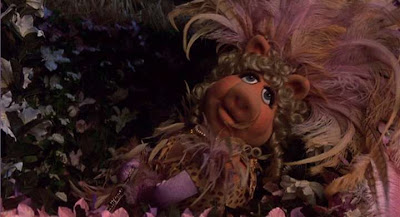 She did well for herself, so don't worry.

Speaking of pirates, the map leads Silver's men to a cave filled with treasure chests!  Empty treasure chests, that is.  The pirates turn on Silver and he orders Hawkins to flee and save himself because he may be a pirate, but he's not a bad guy.  How sweet of him.

The pirates tie up Silver and give him the Black Spot.  Silver, being smarter than the Muppets, reprimands them all for using a page from the Bible to deliver a death sentence and orders that they release him, lest they be eternally punished.  A similar scene appears in the book, but it's actually more important here because it sets up the fact that pirates are highly superstitious.

How does that come into play?  Well, Jim, after rescuing Gonzo and Rizzo from the pigs, runs into Arrow on his lifeboat.  The group secretly board the hijacked ship and Arrow powders his skin and drapes himself in seaweed, pretending to be his own ghost.  This scares all the remaining pirates away and lets Hawkins regain control of the ship. 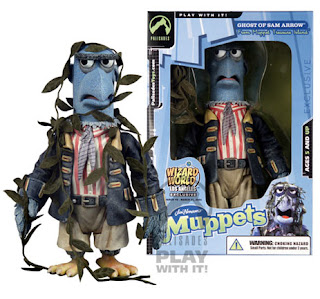 The best characters are always picked for the Muppet Action Figures.

Back on the island, Silver finds Smollett and Gunn and, realizing that Gunn probably took the treasure for herself, demands to know where the loot is.  He also hints at his own romantic past with Gunn, leading to a lot of innuendo for a G-rated Muppet movie. 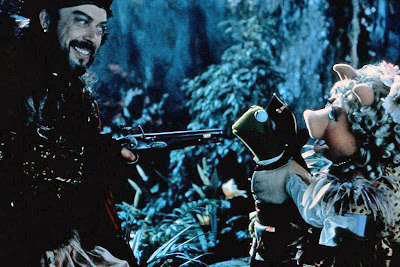 They don't call him "Long John" for nothing!

Fortunately, the native pigs arrive to save the day!  Unfortunately...

Since Gunn refuses to reveal the new location of the treasure, Silver threatens to kill Smollett by hanging him over a cliff. 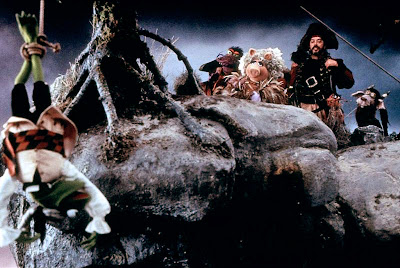 How will Smollett get out of this one?!  Check back tomorrow for the swashbuckling ending to Muppet Treasure Island!
Posted by John H. at 12:14 AM