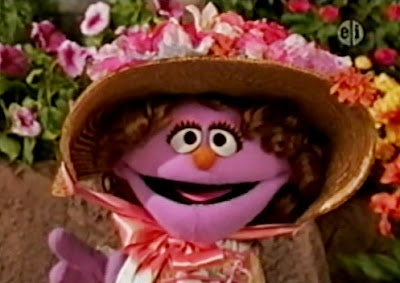 The argumentative gardener who you can't live with or without.

It's a typical day on Sesame Street, which means that a nursery rhyme character is going to appear and wreak havoc on everybody's parade. Today's victim is Oscar, who finds his trash can surrounded by piles of dirt. At first, he is pleased with the change, but he soon learns that the dirt is just the starting point for Mary Mary Quite Contrary's new garden. Just as in the original poem, Mary Mary has some interesting ideas for what constitutes a garden, and, with her partner Mother Goose, she starts planting silver bells and cockle shells, refusing to accept conventional garden norms. 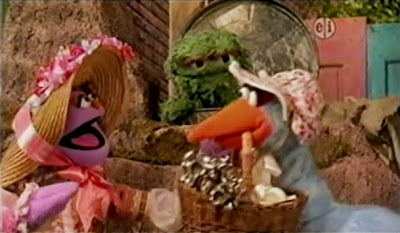 So, now it's just a pile of dirt with junk in it.  Oscar should be pleased.

Once Gordon teaches Mary Mary that a garden, by it's definition, must be used to grow things, she decides to make the most beautiful, lush garden in the world. And why does she decide to do this? Because Oscar doesn't want her to. 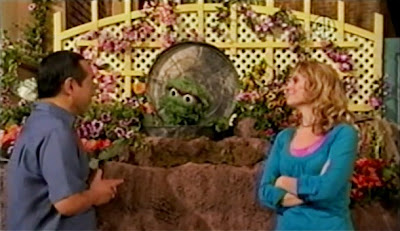 In order to run Mary Mary out of town, Oscar calls up her grouch-counterpart, Hairy Hairy More Contrary, to plant a grouchy garden. Hairy Hairy brings smelly plants and weeds and dirty pigs to create an absolute mess. But Mary Mary, being ever so contrary, sees beauty in the squalor, which causes Hairy Hairy to leave in a huff (since a grouch's work must never be appreciated). 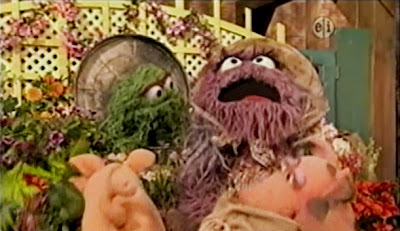 I wonder if everyone has a grouch counterpart, somewhere in the world.

The new stinky garden causes anguish for all the neighbors and they plead with Mary Mary to take it down. But she remains firm, refusing to leave. Enjoying the new grossness, Oscar praises the new garden and welcomes Mary Mary onto the block, allowing her to stay.

And with that, she promptly dismantles her garden and leaves. Though, she does leave behind her maids all in a row, to ceaselessly torture Oscar with their singing. 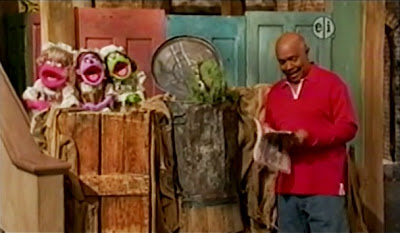 Women are hard to understand.

People are complicated. So when two or more people inhabit the same area, conflict is bound to arise. Likes and dislikes are at odds with one another and the only way to survive is through patience and compromise.

Grouches are anti-people. They strive to bring about the absolute worst in humanity. If you choose too interact with them, they will do all in their power to make it the worst experience ever. Usually, people try to combat a grouch's pessimism with overwhelming niceness. They feel that if they can teach them good manners, then the grouch will become a better person.

But sometimes, you have to fight fire with fire. 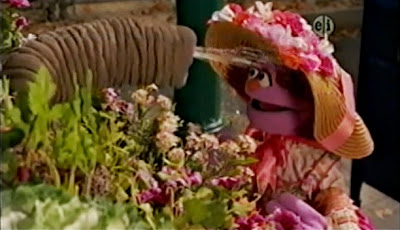 Well, they fought with water, but you get the idea.

Mary Mary Quite Contrary is the world's worst roommate, for people and grouches alike. She isn't inherently evil. She just always wants to do the opposite of what others want from her.

And this desire is genuine. Throughout the entire episode (save for the very end), Mary Mary is always able to come up with reasons to validate her contrarian behavior. She comes to her own decisions and they just always happen to be contrary. The episode handles this imbalance carefully. One could assume that Mary Mary simply doesn't have free will. Whatever one character says, she is destined to do the opposite. Yet she can always explain her actions.

The only point in which she breaks is during her final contrary decision, where she leaves Sesame Street for good, claiming it is only because Oscar wanted her to stay and she must remain contrary. "Aha!" you may say. "This proves she has no free will!"

If this sounds familiar to you, then I'm sorry. But this type of relationship happens all too often. At the end of a break up, we can find ourselves hating the other person for long after they've left. Little things they left behind remind us of the past and cause us to get upset all over again. We try to rationalize their behavior, and unfortunately, many people end up settling on some less-than-kind words to describe their exes. We make them into terrible people because it helps us understand the situation better.

But people are complicated. There is no on/off switch, no black and white categories. Like Oscar, we'll just have to accept that people can hurt you, but their reasons will remain forever unsaid. It's best to move on and let them go.
Posted by John H. at 5:01 PM