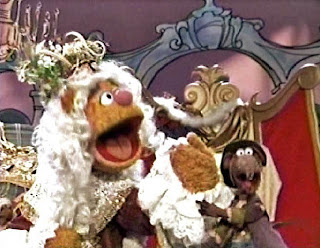 An arrogant emperor hires some tailors who are actually swindlers.  They take advantage of the emperor's pride and convince him that they have crafted clothes out of a fabric that is invisible to those who are too unworthy, elegant, and intelligent.  The emperor naturally cannot see the clothes, but he doesn't want to appear unfit for the crown so he pretends that he can see the clothes.  His royal staff also claim to see the clothes, so that they appear worthy of their regal positions.  When he goes through town to show off his fine new clothes, a little boy states the obvious that the emperor is naked and the emperor carries on, although deep inside, he realizes that he's been hoodwinked.

The story plays the same note for note, with Fozzie as the emperor and Rizzo as the swindler, although there is an added message of not following along with everyone else in an attempt to appear "cool." 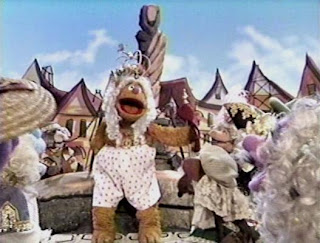 But there is a subtle difference that once again ignores the original message, probably to make room for the new one.  It has to do with Robin playing the little boy.

Well, we all know that Robin is very mature for his age.  As such, his character is celebrated as being one of the most intelligent children in the land.  Which is fine and all except in the original, the boy wasn't supposed to be wise.  He was just supposed to be normal.  It was his innocence that made him speak the truth. 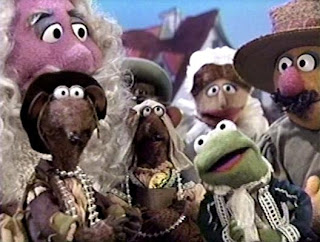 Robin's too smart to play this role.  Bring back Andy and Randy Pig.

Because everyone recognizes Robin's smarts, the emperor's shame is quickly covered up and a big deal is made out of the situation (with Rizzo and his partners ending up in prison).  The original at least sticks to the whole pride angle, where the emperor's ego can't suffer any embarrassment, so he keeps his reaction bottled up and continues his parade through the town, grimacing all the while.  But by casting Fozzie (who wears his emotions on his sleeve), the emperor must be frightfully silly and imbecile.  It's not that he is arrogant, he just is surrounded by too many yes-men. 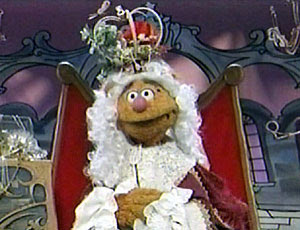 And he has too many beauty marks.

Rating:  Once again, the message is changed and once again, it's a step in the wrong direction (and it makes an already ludicrous story even crazier).  2/5

(A final thought on this story: Emperor Fozzie tries to make "Pop-pop-pop" a catchphrase.  He was years ahead of his time.) 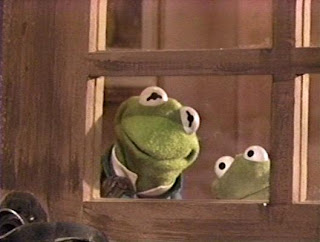 6) The Elves and the Shoemaker

A poor but kindly shoemaker is struggling to make ends meet.  Although his business is suffering due to lack of materials, he still shares his meager food and earnings with those less fortunate than him.  One night, when he has only one scrap of leather left, a group of elves secretly come in and make the most amazing pair of shoes.  It sells for a lot of money the next day and the shoemaker, after buying more materials, gives the rest to the poor.  The elves return and make more shoes as a reward.  With the shoemaker's business now booming, he works late into the night to meet demand.  There, he encounters the elves, returning for work.  To thank them, he makes them special outfits and they leave, never to be seen again.

Instead of elves, they are Elvises. 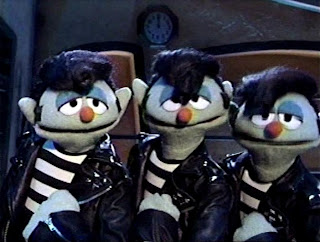 Thank you very much.

How Does the Twist Affect the Story?

But nevertheless, "The Elvises and the Shoemaker" seems just like one of the old bits.  And the pairing works, because, of course, the Elvises get to work making blue suede shoes. 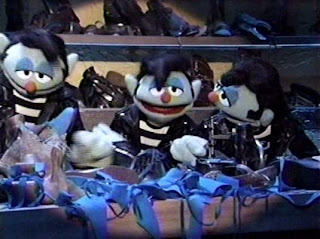 What else would they be doing?

And at the end, the outfits that the shoemaker presents to the Elvises are their rhinestone jumpsuits. 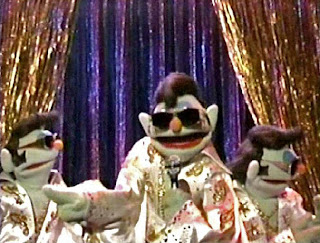 It all makes perfect sense.

I'm willing to forgive this story for dropping the charitable aspect of the shoemaker's character because we need to spend as much time as possible with these Elvises.  These bizarre creatures that don't seem entirely aware of the world around them and only act like Elvis out of a sense of duty (much like the original shoemaking elves, who are obligated to make shoes for some unknown reason). 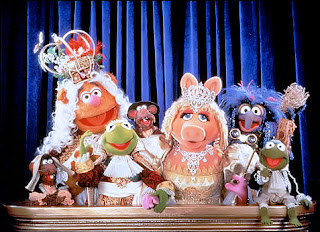 So, Muppet Classic Theater.  It's certainly a joyful, non-threatening little treat.  And it played a large role in keeping the Muppets on people's minds during the hiatus between feature films.  If you grew up with it, I'm sure you have a favorite story and fond memories of this little endeavor.

For me, the stories from best to worst are:
1) The Elves and the Shoemaker
2) Rumpelstiltskin
3) King Midas
4) The Three Little Pigs
5) The Emperor's New Clothes
6) The Boy Who Cried Wolf

But really, my only qualms are where the stories deviate from the original.  Those that do it with a clever purpose fare better than those that just shoehorn in new morals for today's kids.

It's worth checking it out if you need a quick Muppet fix (and if you're a fan of Gonzo and Rizzo's relationship).  Otherwise, just stick with some old episodes of The Muppet Show because it has a lot more pigs in it.
Posted by John H. at 9:23 PM