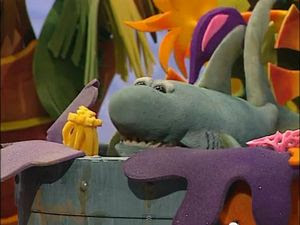 A misunderstood creature that just wants to survive in this world.

This Muppet started out as a generic shark used for underwater scenes and songs on The Muppet Show.  The shark often played the role of predatory antagonist, as seen in the number "Three Little Fishes," though on rare occasions, it was allowed to be the primary focus, where it's murderous appetite was on full display, such as during the song, "Hold Tight, Hold Tight."

Whatever the situation, the shark fit right in with other Muppet monsters: a ravenous beast with one desire - to consume everything! 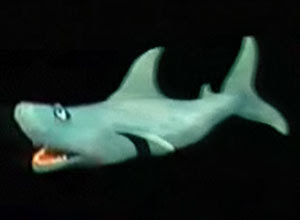 It doesn't get much simpler than that.

But years later, the shark reappeared on the educational program The Animal Show.  Hosted by a skunk named Stinky and a polar bear named Jake, this program set out to inform children about the animals of Earth.  It was filled with interesting facts, and often, it would dispel giant rumors about the animal kingdom.  In the episode "Shark & Sea Lion," the shark was brought on as a guest.  We learned that his name was Achilles and, despite Stinky's fear that a shark is a dangerous guest to have around, Achilles proved to be most genial.

In a world with Jaws, Sharktopus, and Discovery Channel's "Shark Week," the common perception of sharks is that they are unstoppable eating machines, the closest thing we have on this Earth to real monsters.  Reports of shark attacks always make headline news and an increasing number of people fear the ocean as a result.  In fact, due to the popularity of Jaws, great white sharks have nearly been hunted to extinction.  The idea that these creatures are a plague that serve no purpose and only threaten mankind is ludicrous, but is unfortunately viewed as fact among many people.

Achilles's appearance on The Animal Show attempts to set the record straight quickly.  Prior to this show, kids would assume that sharks should be feared and killed.  But, as soon as Stinky shows signs of fear, Jake shuts him down, claiming that sharks are just trying to leave peacefully.  Yes, they are carnivorous, but they don't go killing every single thing they see.  In fact, Achilles presents a clip of a shark surrounded by a swarm of fish that are in no danger, since they provide a useful service of cleaning the shark of tiny animals.

A repeated fact stated during this show highlights how sharks are the only fish who can drown.  Since they lack an air sack to store oxygen, sharks must continue swimming in order to breathe.  If they stop, they'll sink to the bottom of the ocean and die.  A shark is constantly living on the precipice of death and we are the ones who feel we must continue to thin out their population.

Achilles has taught us that sharks are people too.  It is in their nature to eat meat and there is a chance that a shark could harm you if you are in the wrong place at the wrong time.  But they don't attack out of malice or evil.  They hunt for survival.  The best we can do is stay out of their way and just let them live.  "Shark Week" proves to be a popular draw for us not only because we get a safe chance to get relatively close to these creatures, but because we get to experience them as they are: a majestic and wonderful part of the animal kingdom.
Posted by John H. at 11:19 PM