It's sad when television shows are cancelled before they have a chance to develop.  Producers make shows with the hope of being the next big cultural phenomenon.  Brand new exciting characters that people want to hang out with on a weekly basis are introduced.  But, just as with real people, first impressions aren't always the best.  Sometimes the most interesting people take time to get to know.  Not everyone chooses their best friends the first time the meet them and most classic television show characters didn't necessarily wow audiences due to their first appearance.

One recurring segment/cast of characters that showed the greatest untapped potential on "MuppeTelevision" were the "visits" from the underground television station known as "Gorilla Television."  Muppet Central was supposedly the location where Kermit could pick and choose the content from all around the world.  Gorilla Television was the opposite, a sanctuary for the unloved aspects of television that the general audience deemed inappropriate.

A trio of renegade Muppets would use their pirate television station to present content that was anti-establishment, anti-wholesome, and anti-Henson. What a bunch of Gen-X hipsters.

Paradoxically, even though Henson is nearly synonymous with bizarre counterculture entertainment, his Muppets had definitely become mainstream by 1989.  Gorilla TV was going to take that back.  They were going to remind us that the Muppets were weird.  Their leader Zondra was a representative of the goth subculture that was taking shape during the '80s.  Her feminist ideals and rallies against authority made her the perfect Muppet to lead this charge.  She specifically lambasted Jim Henson's character, feeling that his popularity has caused other puppeteers to sit in the shadows, unable to break into the limelight.  As part of her crusade to "fix" television, she would invite other puppet acts to perform in her studio. 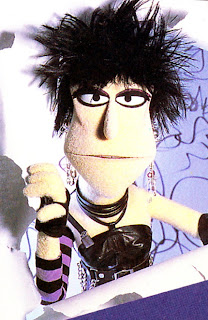 Her first guest was comedian Marc Weiner, who disagreed with Zondra, claiming that he admires Henson.  Still, this was basically a frame to allow more puppeteers to take the stage, something that Henson clearly wanted to highlight.

In a later appearance, Zondra, along with her cameraman Chip and her partner Ubu, kidnaps a woman and forces her to watch mainstream television commercials to show how television brainwashes us to become mindless zombies bent on consumerism.  Unfortunately, Ubu also falls victim to the glow of the screen and frees the captive so they can go take advantage of the great deals at the supermarket.

Judging by the promotional materials for the show, Zondra, Ubu, and Chip were supposed to be main characters, and would quite possibly become the Muppets' main antagonists.  Despite only appearing in two episodes, they were signs that the show had lofty goals.  Being placed in the position of television pirates, Zondra and her crew could both introduce and mock concepts that would normally not be discussed in a regular Muppet show.

The American public missed out on a new breed of Muppets, some who could have gone on to become classic characters in their own rights.  Just as The Muppet Show had Sam the Eagle to represent the conservative far-right, "MuppeTelevision" had Zondra and Ubu to represent the radical far-left.  Both parties would antagonize our heroes, but neither were outright villains.  Like all Muppets, there is a sense of fun and admiration for the concepts they were poking fun at.  Perhaps their inclusion represented a tonal shift in our culture's climate, but they were still valuable characters nonetheless.

So, before we dismiss media too quickly, perhaps we should give it a chance to find its bearings.  There are many fantastic characters out there, just waiting to be loved. 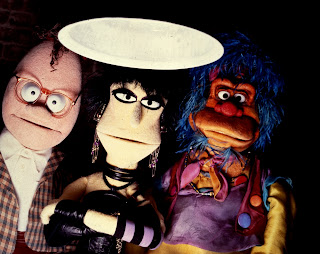 Just don't let these pirates intimidate you.
Posted by John H. at 7:47 PM