The "MuppeTelevision" segments of The Jim Henson Hour were exactly what you'd expect when you hear the phrase "late '80s Muppet Show."  And that may have led to its quick demise.  The Muppet Show, while it was a product of the 1970s, was still timeless.  The set-up and acts were based on vaudeville routines and old show tunes.  The guest stars were an even blend of stars at the ends of their career, stars at the beginning, or stars in the middle.  The Muppet Show still holds up today because there is no need to explain references to current events or pop culture.  There is enough substance and charm to make it a classic.

"MuppeTelevision" could only exist in the late '80s.  Had it been given time to develop, it may have earned a spot in our collective conscience as "the second Muppet Show."  But the digital effects, spoofs of then-recent movies and TV shows, and overall approach to entertainment hinder it's ability to remain relevant decades later.  Needless to say, it was familiar, yet wildly different in tone. 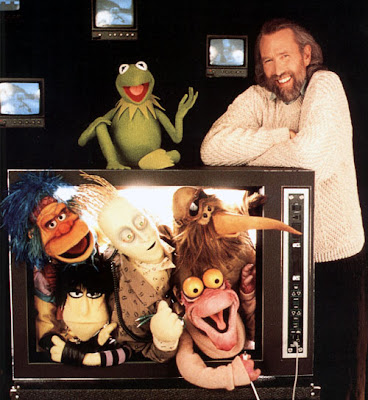 It's all our old friends!!!  Wait, who are these people?

The show's cast was an odd mix of popular Muppet Show stars and brand new Muppets (of which only one of them survived past this series' cancellation).  Frank Oz and Richard Hunt rarely appeared in the program, so appearances by their signature characters were treated more like cameos and guest stars.  And Jerry Nelson appeared a few times, but none of his main characters made appearances.  The actual main returning cast members were Kermit the Frog, Gonzo, and Link Hogthrob, for some reason.  I guess Henson just really liked Link.  Can't blame him, though. 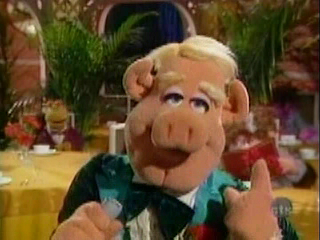 He is the best Muppet, after all.

Then we had Bean Bunny, who at the time was only familiar to audiences due to The Tale of Bunny Picnic, but I've already discussed his influence on the show.  The rest of the cast were basically replacements of older characters.

There was Lindbergh the Kiwi, the station's maintenance man, voiced by Gord Robertson doing his best impression of Beauregard the Janitor. 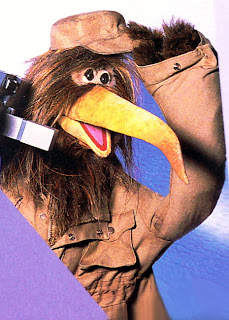 And nary a New Zealand accent.  A missed opportunity.

Vicki, voiced by Fran Brill, was the Scooter of the bunch, acting as the stage manager who was much younger than the rest of the gang. 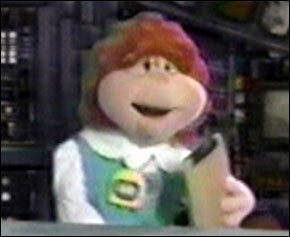 In other words, Prairie Dawn.

And then we had Clifford, voiced by Kevin Clash, filling in for Floyd.  He led the band Solid Foam (great name) which occasionally had appearances by Electric Mayhem members.  He was the laid back musician and he was to become Clash's main Muppet character. 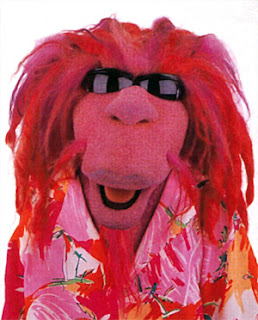 We'll get to you later.

As our sources of chaos, to round out the cast, were Digit, the robotic person who was the holdover from Inner Tube and Leon, another Clash character, who had shifty eyes and was always trying to grift people.  In fact, he once swindled Bill Cosby in his own show! 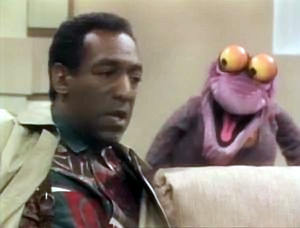 This is a surreal event that occurred once on our television screens.

The first episode of the show doesn't really bother with introductions and just assumes that we know who all of these people are.  Kermit, having been put in charge of the Inner-Tube-ish Muppet Central, interacts with these new characters as if they are old friends and we, the audience, are slow for not remembering who these Muppets are.

The main story concerns Digit being able to transport alien television channels through his body into our world, and then the cast takes a trip inside his robotic head to fix him when he malfunctions.  It's quite a trip for a first-time audience. 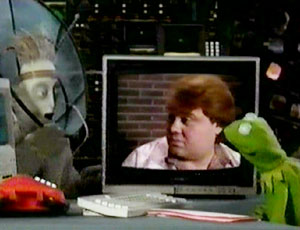 I understand why Kermit and Louie Anderson are there, but nothing else makes sense!

Oh, did I mention how this show also had guest stars?  And they were confined to their sketches and television monitors in the background, making for some pre-recorded awkward dialogue that would have made the creators of Space Ghost from Coast to Coast proud?  Also, there was no laugh track which I would normally consider a good thing, but coming from The Muppet Show, this new program just feels empty without it.

The first episode ends with the Muppets meeting their alien doppelgangers, the Teppums.  And this would have been neat had the cast not been so completely filled with new faces that seeing their bizarro alternates means nothing to us. 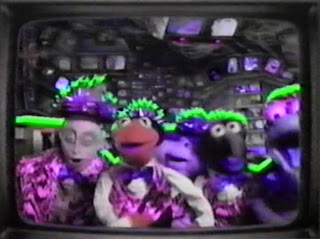 What is happening?!  Where are the old Muppets?!

While this first episode is a big departure from what we are used to from a Muppet television show, you shouldn't think that the whole show should be easily dismissed.  In fact, there are moments of sheer brilliance throughout the following episodes and I shall be discussing some over the next few posts.

I just wanted to prepare you to leave your comfort zone.  Because things are about to get weird.  But with Jim, we wouldn't want it any other way.
Posted by John H. at 11:16 PM