You Can't Do That on Television... or Can You?

Originally, I was going to spend this week discussing the follow-up to The Muppet Show that was made in 1996, Muppets Tonight.  But, in order to properly understand what led to that show's creation, it was important to look at 1989's The Jim Henson Hour, specifically the MuppeTelevision segments.  And, in order to understand that, we must first look at Inner Tube, which is a species unto itself. 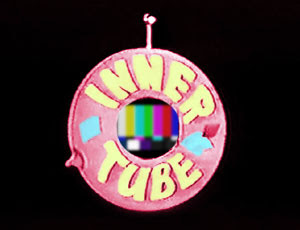 It's unlike anything you'll ever want to see.

The premise concerns the world inside your television set.  Two engineers, Jake and Henry, oversaw the Inner Tube station, which gathered the very best from "1500 channels" (all of which were fake) in order to provide us with the best quality material.  Like The Muppet Show, it was a variety show with recurring characters and segments.  The wraparound bits would feature the antics of the television station while the sketches and songs would be drawn from the channels.

Unlike The Muppet Show, there were absolutely no Muppets. 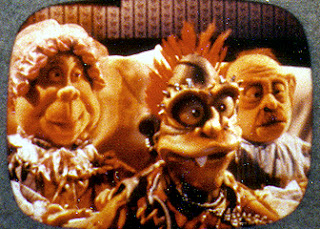 Welcome back to Uncanny Valley!

These humanoid characters were not as appealing to look at as the colorful Muppets audiences were familiar with.  But, they still had the behavior of Muppets, with some being accident prone and destructive and others being neurotic and quirky. 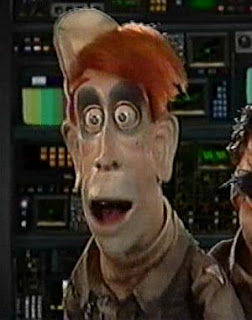 Henry is the sympathetic host.  Pay no mind that he looks like a ghoul.

Only a 10-minute pilot exists and it basically tries to introduce all the major characters and concepts in that brief time.  The story, if there is one, follows Jake and Henry as they try to keep the more destructive characters under control.  Crusher, seen in the picture with the two elderly folks, escapes the television set and runs amok, while Glitch, an animated creature, screws up the stations. 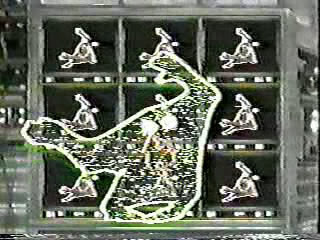 I can SEE the music!

You can watch the entire segment below.  You'll notice that a brief intro featuring Kermit has been inserted in order to explain the conceit, as well as to appeal to audiences who may not be as open to the weirdness that follows.  The restored version still has that grainy late '80s VHS quality, which I think adds to the surreal nature of the program.

The pilot is cluttered and lacks focus, but you can still tell the kind of show it's attempting to be.  In fact,  it seems very similar to the aesthetic of MTV in the early '90s or shows featured on [adult swim], like Robot Chicken or Tim and Eric Awesome Show, Great Job!  That level of random, absurdist, non-conformitive sense of humor is all over the place nowadays.  And, to think, Henson tried to manufacture it in 1987. 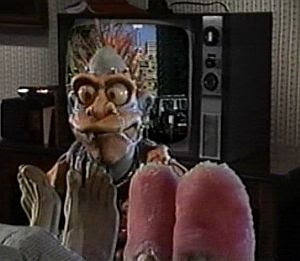 Move aside, Gramps!  This is Generation X's time to shine!

The segment that is both the strangest and also the best executed is when Zaloom the Pirate hijacks the airways to deliver some an anti-technology propaganda.  The floating head conjures up a tiny world with a little frog who is then killed by the pollution made by nearby factories.  It's memorable and bizarre.  But it's also quite funny.  One could only wonder how this character could have grown had the show been picked up. 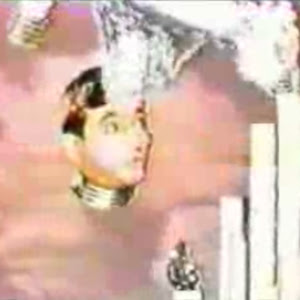 "I'm aware of the irony of appearing on TV in order to decry it, so don't bother pointing that out."

But it seemed that the world wasn't ready for this kind of television show.  Henson later reworked it with the title Lead Free TV and planned on making it a part of his upcoming anthology series.  He called it "The Muppet Show of the future" to establish a connection with his other work.  Still, the network wasn't too keen on the idea.  Finally, Henson removed all of the characters (save for the semi-robotic keyboardist named Digit) and put his classic Muppets in the roles instead, along with a variety of some more Muppety-looking characters.

Inner Tube was lost, but it lives on in today's postmodern alternative "anti-comedy" shows.  And at least we got to keep Digit who we'll learn more about as we take a look at MuppeTelevision. 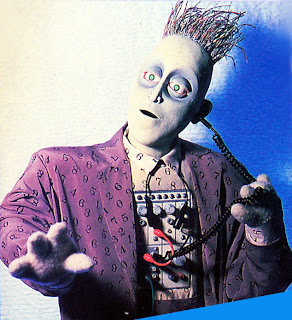 Digit, the sole survivor of Inner Tube and winner of 1989's Creepiest-Looking Muppet Award.
Posted by John H. at 10:43 PM