Sam the Eagle represents American patriotism at its worst and best.  He is extremely loyal to his country (or at least his idea of his country) but completely oblivious to what his country is all about.  Created to parody right-wing conservatives, Sam behaves like a buffoon, more so than the clowns he associates with. 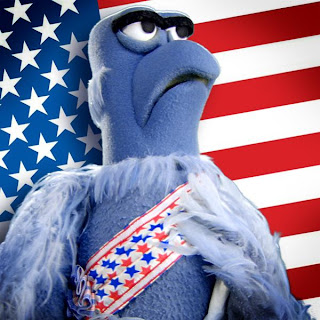 Acting as The Muppet Show censor, Sam hoped to bring quality entertainment to the American public, removing any sense of indecency.  Compared to other forms of entertainment, the Muppets are quite wholesome.  They were quirky and weird, but they never aimed to offend.  So, adding a censor to their midst required that person to be the stuffiest individual imaginable.  Sam was always quick to naysay, but he never seemed to know what he wanted.  In one famous speech, he starts condemning every creature in the world for being naked under their clothes, fur, and feathers.

Kermit, as we know, was a very orderly host.  He was usually the straight man for bizarre shenanigans.  When you're trying to argue that he isn't wholesome enough, then you know you have issues.

When pressed to explain what exactly he wants out of The Muppet Show, Sam commonly calls for  "culture."  Yet, when he must prove his knowledge of "cultured" art, he often comes up short, mistaking opera for ballet or failing to recognize great artists when he is talking to them. 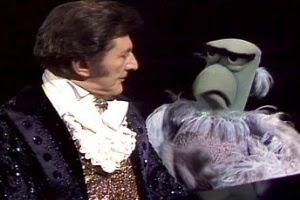 Of course, Liberace was going to be a tough sell on this eagle no matter what.

Because of his ignorance about art, the other Muppets would usually prank Sam into performing items that featured "crassness" in subtle ways.

He was definitely a punching bag for the liberal minded Muppeteers, yet, he was painted in such a way that even those he was mocking could appreciate him.  Stephen Colbert is a great example of a fake conservative who uses his character for satire, yet he stays so true to character that some can't tell the difference between him and an actual conservative.  Those conservatives who are aware that is an act are generally not fans, although many have a good sense of humor and are willing to engage with him.  Sam probably wouldn't offend as many conservatives as Colbert, though.  Because he is often the victim of his own hubris, audiences can sympathize with him, no matter their political affiliation.  He just tries so hard to be right that he can't help but stumble.  In one surprisingly serious moment, Sam reveals the nature of his family, having a wife who left him and two college-aged children who don't write to him.

He is so hard pressed to promote American family values that he is unable to value his own family.  That's tragically and comedically poetic. 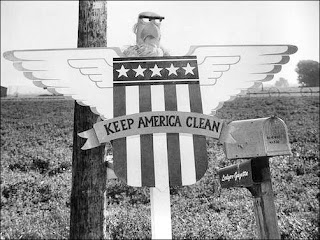 No time for family.  He's got a country to protect.

No matter how absurd Sam's demands can get, he is still viewed as being a great American.  Being an American eagle, he has to do no more than just exist in order for an American citizen to feel pride.  Even if he stands against everything you believe, he loves his country and is willing to do whatever he can to defend it. 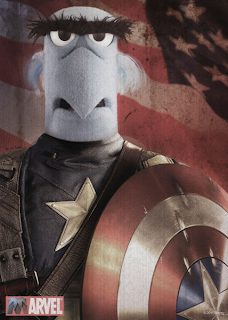 The best thing to come out of the Disney-Marvel merger.

Though his feathers get ruffled over any form of weirdness, he must remember that the greatest value of the American Way is exercising one's rights to freedom.  No matter how flustered his companions make him, they are being American by being themselves.  His is a difficult life, being the only Muppet who represses his own Muppet heritage.  But, he takes himself so seriously and to such an extreme that he can't help but belong with the other crazy Muppets.

They are all weirdos, and he is the weirdest of them all.

As a 4th of July bonus, here are Don Music and Grover reenacting the signing of the Declaration of Independence.