This One Time at Summer Camp... 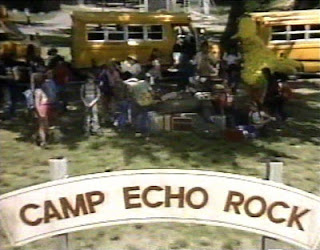 In 1982, Big Bird spent a week at summer camp.  It was is first time away from home.  And to a kid, this was a life changer.  This was scarier than going on vacation and scarier than going to school.  This was complete isolation from the family you've spent your whole life with.  Sure, at first, Big Bird is excited about all of the fun things he'll get to experience at camp. 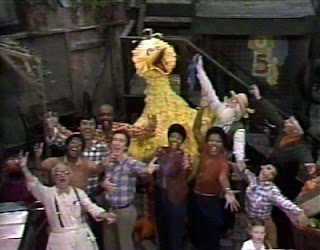 In fact, everyone is a little too excited.

But then, reality sets in as Big Bird realizes he'll be leaving all his friends behind and he won't be able to see them at the end of the day.  He is both happy and sad at the same time, and these mixed emotions confuse and overwhelm the bird.  Even Gordon starts crying because he knows Big Bird is growing up. 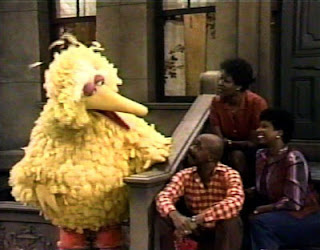 Big Bird has no idea what he is in for, and how could he?  Summer camp is unlike anything else in a child's world.  It is a solid week of outdoor fun and games, yet there are also rules and regulations, not to mention the abundance of new faces who have no idea what is going on.  Big Bird meets his first new "friend" on the bus to camp, and this kid is a pain! 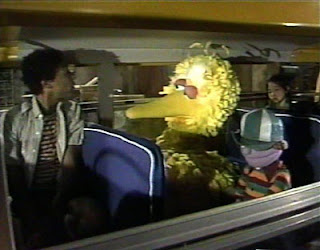 He's the only other Muppet on the bus.  I guess I'd better sit with him.

His name is Rusty and his main character trait is that he is completely unwilling to try new things until people coax him into it (or ignore him) and then he ends up doing the new thing anyway as if he had planned on it all along.  He's insufferable.  After everyone gets situated in their cabin and spends the first night, Rusty refuses to get up in the morning and holds everyone up, demanding they bring him breakfast in bed.  This kid quickly learns that the world of summer camp isn't going to cater to his every whim and he'll actually have to be productive. 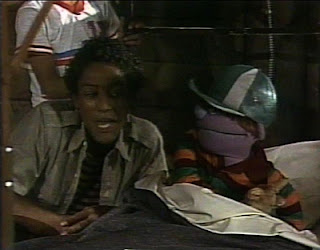 This kid's begging to be short-sheeted!

Big Bird runs into similar troubles, as he insists on carrying his teddy bear with him to every activity.  He quickly learns that he'll have to leave the bear behind if he wants to participate.  He worries when he is called up to play baseball, since he has never played before.  But, through practice, he succeeds in getting a home run! Trying new things is good! 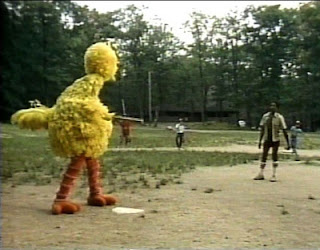 And he managed to do it with only one arm!

After an exciting day, Big Bird settles into bed, and then gets very homesick.  That morning when he woke up, the new surroundings confused him at first, but he learned to enjoy the camp.  But now that he has time to rest and reflect, he can't help but be sad.  Rusty also feels homesick (though he won't admit it, the punk) and together, the two share a good cry. 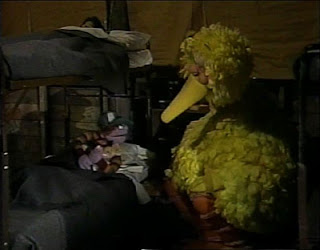 It isn't a good day at summer camp unless it ends in tears.

The next day, Big Bird tries many new things, with his biggest accomplishment being swimming!  I don't even want to think about how they dealt with the aftermath of the Big Bird puppet being dunked in a lake.  Poor Carroll Spinney. 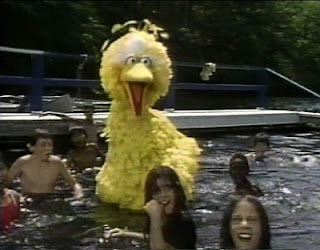 Sure, Big Bird looks happy, but inside is a man gasping for air.

The following day is a hike, and Big Bird and Rusty spend their first night out in the wilderness.  The group gathers around the campfire for songs and stories.  And tacky rock and roll numbers. 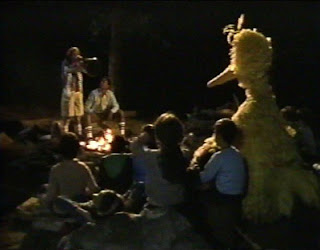 Can't we just appreciate the peace?

Big Bird and Rusty share a tent and the two argue about space issues.  Eventually, they manage to settle into a configuration that makes both of their puppeteers happy. 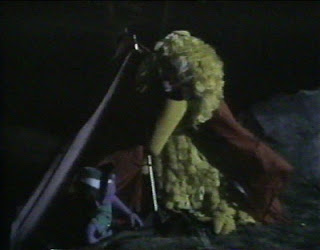 Rusty's just upset that he can never take off his baseball cap.

Finally, after a weeks worth of new adventures, the campers get ready to head home.  Everyone wins obligatory camp awards.  Is this a summer camp tradition?  Everyone gets an award on the last day?  I never heard of it before.  Anyway, after the nameless extras win "Tidiest Bunk" and "Least Acorns Shoved Up Nostril," Big Bird wins "Best Swimmer" and Rusty wins "Most Willing to Try New Things Even If He Thought He Wouldn't Like Them."  And, true to his nature, Rusty doesn't care if he got an award, but he accepts it anyway if it'll make everyone happy.  What a little Pete Campbell. 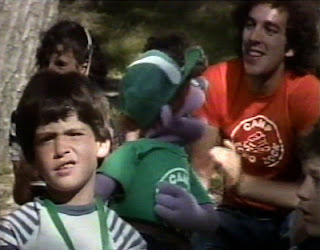 Seriously, that kid is the worst.

Eventually, Big Bird says goodbye to camp and returns home.  He learns that Rusty lives just around the corner from him and he promises to visit him all the time now that camp is over. 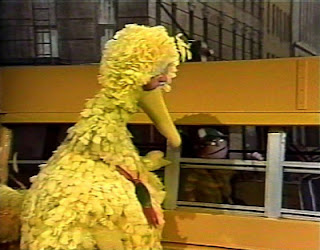 Summer camp is not an event.  It is a state of mind.  For Big Bird, it was a time to face fears and try knew things.  He learned a lot about himself, now that he was away from everything that was familiar to him.  Summer camp allows for introspection, and upon returning to the real world, you are faced with a new outlook on life.  Anything can happen in this world, and you've got to be ready to face it.

Otherwise you'll end up just like Rusty.  And that kid's a tool. 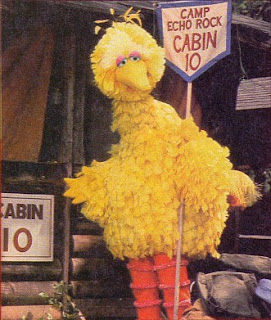