After the success of The Muppet Christmas Carol, Walt Disney Pictures produced another adaptation of a classic piece of British literature with the Muppets playing minor roles.  Production wise, this film would be exactly the same as it's predecessor.  Yet, despite (or because of) the similarities, the next film would be even more successful than the last three Muppet films. 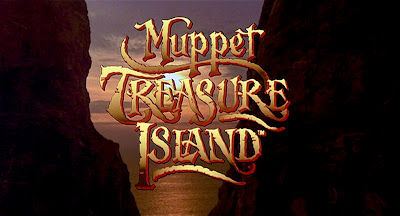 This one's about pirates.

Treasure Island, like A Christmas Carol has been through dozens of film adaptations.  While the story may not be as memorable as the Dickens tale, Robert Louis Stevenson's novel established many iconic characters and elements that we associate with pirate tales.  Buried treasure, "X marks the spot," island paradises and eye-patch-wearing, peg-legged, parrot-totting pirates can all be found in this epic narrative.  Muppet Treasure Island is aware of this, and so it begins with a shanty called, "Shiver Me Timbers" glorifying the pirate life as the titular treasure is being buried.

But the focus of the novel is the young Jim Hawkins, who heads off on an adventure, leaving his life of squalor and poverty behind.  He is introduced working in an inn alongside Gonzo and Rizzo, who a basically fulfilling the same roles as they did in The Muppet Christmas Carol.  They are just being themselves, commenting on the situations they find themselves in.  But hey, that was one of the best parts of the previous movie, and they continue to be funny here, so who's complaining? 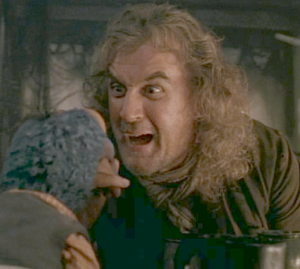 That's Billy Bones, one of the inn's permanent residents who amuses other patrons with his fanciful tales of life on the high seas.  Everyone considers him to be a crazy coot, and no one takes him seriously, except for Jim.  Having lost his father, who was also a seafarer, Jim dreams of having his own adventures on the ocean, and, with his girly voice, he and his pals sing of "Something Better."

After closing up the inn for the night, a late visitor comes barging in, demanding to see Billy Bones.  This is Blind Pew, an intimidating figure in the original book who is now a Muppet buffoon.  Still, he manages to be humorous and creepy at the same time.  I'm not sure why they didn't have Uncle Deadly play this role since they look extremely similar and are both portrayed by Jerry Nelson.  A missed opportunity, I say. 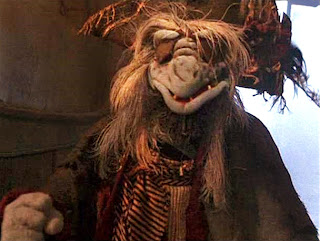 Anyway, Blind Pew was a former member of Billy Bones' pirate crew, and he has come to deliver a sinister message: the Black Spot.

The simple spot signifies that the rest of the pirates are going to hunt Billy down if he doesn't turn over the treasure map he kept to himself all these years.  Bones instantly dies of fright, but then wakes up a bit to explain some of the situation and give Jim the map, only to die again (obviously this is different in the book, but, hey, it's a funny kids movie, let it go).

The pirates raid the inn and Jim narrowly escapes as the building burns down.  He decides that this is his chance to go on an adventure (since he has nothing to go back to) and heads into town to find someone willing to finance his voyage.  He ends up at the house of the rich Squire Trelawney who in the novel is completely normal and interested in the history of the map and it's treasure.  Here, it's Fozzie Bear and he talks to a man who lives in his finger named "Mr. Bimbo." 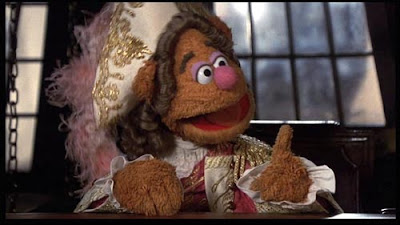 This was Jerry Juhl's decision to add this trait, and initially, Frank Oz was turned off to the idea, since it didn't make sense for either Trelawney or Fozzie to exhibit this level of lunacy.  Yet, Frank grew to love this aspect.  And you know what?  It actually works for the movie.  It adds a whole new level to Fozzie's psyche and it's pretty interesting to see this play out.

Along with his companion Dr. Livesy (played by Bunsen) and Beaker (played by Beaker), Trelawney agrees to lend Hawkins his ship, and he arranges a crew to set sail on the Hispaniola.  And it is the most magnificent thing young Hawkins has ever seen. 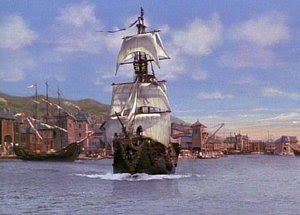 This movie is going to be EPIC.

Tomorrow, we meet the crew of the Hispaniola and learn why every move needs Tim Curry/Sam the Eagle.
Posted by John H. at 11:00 PM