The Phantom of the Muppet Theater

It's Halloween!  A night to revel in the spooky festivities of horror and ghosts and creepy-crawlies.  How odd is it that we actually take a day to celebrate fear and encourage scares.  That's because there is a sense of playful fun that accompanies any sorts of haunts and frights that occur on this night.

While The Muppet Show featured its share of colorful monsters, only one creature was supposed to be the scariest of them all.  It was the deceased thespian Uncle Deadly, cursed to haunt the Muppet Theater, having been killed by his critics during a performance of Othello. 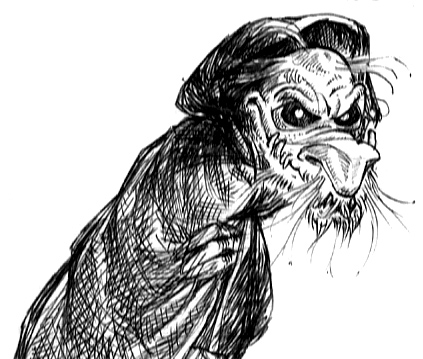 What fools these Muppets be.

For those unfamiliar with him, Uncle Deadly was a strange presence, often lurking in the backgrounds of scenes.  His actual introduction occurred a few episodes after his first appearances.  Here, he was revealed to have been trying to flush out the Muppets to prevent any tomfoolery occurring on his stage.

His efforts obviously were all for naught as the Muppets were here to stay.  But he had a passion for great acting and horror, so he was allowed to stay as a recurring cast member.  He got along quite well with guest star Vincent Price in their first Halloween episode.

With Price, Deadly was able to enjoy the stage once again with a fellow horror connoisseur.  Vincent Price started off as an average dramatic actor, but his signature slick voice and preference for the macabre made him a horror icon.  He could bring a certain joy to what was once considered terrifying.  Suffice it to say, Uncle Deadly idolized this great star.

Price, in his later career, would often take the role of host to a great many horror films and stories on television, film, and radio, starting with the anthology series The Price of Fear, and later, PBS's Mystery!  Uncle Deadly was supposed to follow in his footsteps with a Tales from the Crypt kind of show called Uncle Deadly's House of Badness.  Unfortunately, as with most Muppet horror specials, the project was canceled.

It seemed as if the puppet devoted to other-worldly tales could not catch a break and was regulated to crowd scenes in later Muppet projects.  But, there is a bright star in this ghoul's future!  In the upcoming movie The Muppets, he has been placed in the role of the villain, alongside Chris Cooper! 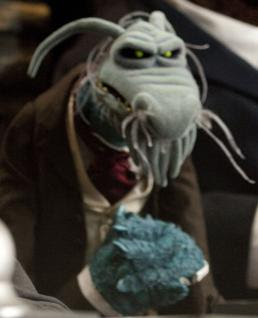 Apparently he's alive and well and wearing a business suit.

Details are fuzzy at the moment, but at least this former great actor can be brought into the limelight once again, ready to terrorize a whole new generation of children.

So on this Halloween night, enjoy the scares and tricks and treats as you remember that this is a day to celebrate the unknown and unfamiliar.  It is a day to enjoy that which is weird and not normally celebrated.  Let loose and scare someone half-to-death!  Halloween Night is Mischief Night!
Posted by John H. at 3:41 PM