Where Fear Comes From

Fear is a strange thing.  It is a bodily response that is both pleasant and unpleasant at the same time.  It protects us from danger, but also prevents us from taking risks.  We seek it out in safe environments, like scary movies or haunted houses, but we go to great lengths to avoid it as well.  Bravery and absence of fear is considered a virtue in our society, despite the fact that we need it to maintain a long, healthy life.  Without fear, there is no initiative, no drive.

The second episode of The Storyteller involves a young man who does not possess fear.  As such, he does not possess much other knowledge either, and skates through life through his naivety and dumb luck. 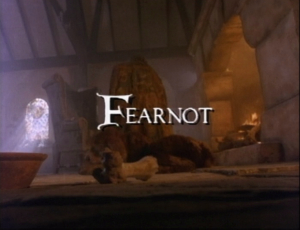 She's worth a few concussions.
After﻿ his latest bout of unintentional non-cowardice, Fearnot's father sends him off into the forest and tells him not to return until he has learned how to be afraid.  He undergoes many tests with the help of a new friend, a scheming con-man who only intends to win his money if he can successfully spook him.  He places Fearnot in the path of underwater demons, menacing ghosts, and even pulls a "knife" on him threatening to slit his throat.
Fearnot endures scarier and scarier situations, culminating in spending a night in a cursed castle.  His innocence and ignorance lets him live through the night, where countless others have perished after being frightened to death.  As a reward for living through the haunted castle, Fearnot discovers a room filled with wealth and gold as far as the eye can see.  He comes home rich and famous, thanks to his exploits resulting in the banishment of several ghouls.  Everyone adores him and for once, his lack of fear has brought him nothing but good fortune!
And, so, it goes to show that without fear, one can live happily ever- Wait!  He still has to go share his new glory with his one true love!
He rushes to her house to tell her the good news, but finds her mournful father, who tells Fearnot that due to his departure, she has fallen deathly ill with a broken heart.  He kneels down beside her, begging her to wake up.
And, for the first time in his life, Fearnot shuddered.

Fear may keep us from accomplishing a great many things.  Without the fear of pain, embrrassment, sadness, and rejection, we are able to become all that we've ever wanted to be and more.  But at what cost?
To truly love something in this world, we must also truly fear.  It is the fear of loss.  When you get down to it, fear is what results when you lose all control.  You no longer have any influence over a situation and and so you subvert to your involuntary insticts to shield and protect yourself.  Fearnot gained so much because what he lacked in wits, he made up for in his ability to take control of any situation he was in.  But his grasp only extends as far as the factors of his own life.
We cannot control what happens to our loved ones.
And that is where fear comes from.﻿
Posted by John H. at 9:22 PM

Email ThisBlogThis!Share to TwitterShare to FacebookShare to Pinterest
Labels: fearnot, the storyteller