Stay for the Music

What I like my music to do to me is to awaken the ghosts inside of me.
Not the demons, you understand, but the ghosts.
- David Bowie
The children's educational programs that Henson is best known for are Sesame Street, which focused on expected preschool knowledge, and Fraggle Rock, which focused on societal norms and relationships.  He also produced a short series completely devoted to music education and appreciation called The Ghost of Faffner Hall.  With the help of two music professors from the Canadian University of York, the writers of the show incorporated their curriculum into easy to follow concepts about the world of music.  Many great musicians would guest star to help teach that week's message. 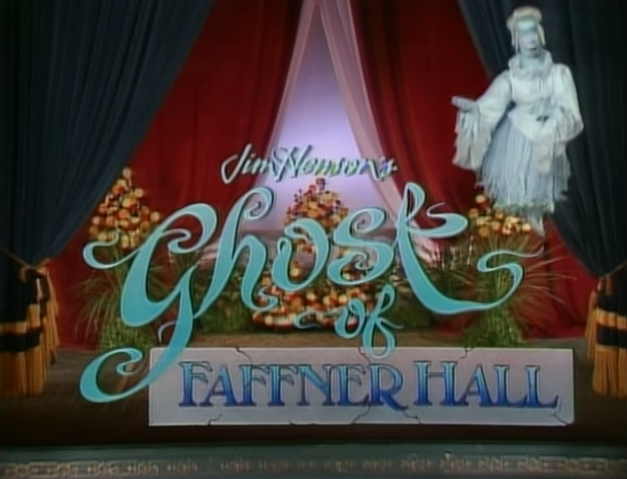 The main plot of the show followed the titular ghost Fughetta Faffner.  She "haunts" the music conservatory Faffner Hall, but she is not a menacing presence.  She loves and supports the growth of music, but the hall becomes inherited by her great-great-gandnephew Farkas Faffner, who hates music and tries to get rid of the musicians and instruments.  With the help of her living friends, Fughetta manages to thwart Farkas's evil schemes. 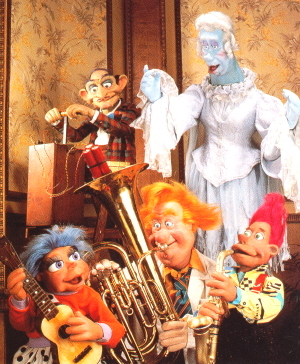 And for some reason, the living souls are a lot creepier looking than the ghost.
As with many children's shows, celebrities just show up and no one blinks an eye.  In the following clip, Fughetta and her companions are on ghostbusting quest to eradicate the building of other spirits (apparently, only one ghost is allowed to haunt a building at a time).  They follow the noises in the back storage areas, only to discover legendary jazz musician Dizzy Gillespie (and his amazing cheeks), who of course is just hanging around.
Randomness aside, there is a lot of heart in this show, which only tries to promote the musical arts in a loving and kind way.  Fughetta is normally transparent, but she solidifies when she hears great music.  The memories associated with music are so strong that they are able to raise the dead.  The spooks and specters that haunt old buildings are believed to have unfinished business, preventing them from crossing over into the other side.  They can be frightening to come across, but they mean no harm.  In this case, a musician's passion was so strong that she could not bear to leave this world.
Music is a strange phenomenon.  It exists purely in an audio form and is only pleasurable in that form.  A book of sheet music can translate the experience, but it cannot come close to imitating it.  Music only exists to be enjoyed.  A random assortment of sounds can be arranged methodically and rhythmically, but if they do not appeal to our ears, we all say the same thing. "That's not music."  Those who can create music are sharing a wonderful gift with the world.  They are able to speak directly with our emotions, crossing cultural and language barriers.  Other animals who communicate with sounds do it with music.  Birds are tweeting, crickets are chirping, and whales are singing.  Music is shared across many species and each one elicits a different response.  The brilliant piece of music is strong enough to conjure up complex feelings and long forgotten memories.  Faint images of the mind and soul, much like a ghost.  Whether ghosts are real or not, there is a sense of strong emotion tied to them.  They are memories trapped in time and space.  Long-lost relatives and loved ones whose presence was so admired in life that they leave an imprint behind after they depart.  When you encounter one, a feeling overcomes your whole body, instructing you that you are in the presence of something special.
The only difference between a ghost and a song is how you experience it.
Who knows what awaits in the afterlife.  There could be great pleasure, immense pain, or absolutely nothing.  It is scary to think about, and even scarier for the recently deceased.  Some people are not quite ready to face the unknown.  After all, who can ever be ready to leave the music behind?
Posted by John H. at 5:48 PM